A writing system lost for 3,000 years has been rediscovered on an ancient stone tablet in Mexico, archaeologists say (map of Mexico).
The tablet is the earliest example of writing in the New World, pushing back the origins of writing in the region by several hundred years, according to a paper that will appear in tomorrow’s edition of the journal Science.

Most likely, the Olmec people, who once lived along the Gulf of Mexico, created the tablet, the researchers say.
The Olmecs, famed for their colossal statues of heads, are generally regarded as the first true civilization in the Americas.
Until now no one had ever found concrete evidence of Olmec writing. 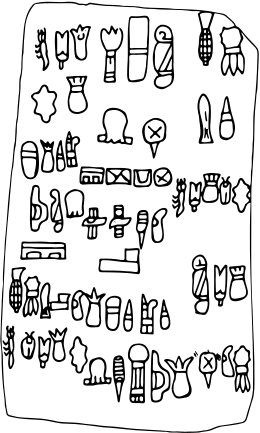 The 62 glyphs of the Cascajal Block


“The rediscovery of ancient writing systems is one of the rarest events in archaeology,” said Stephen Houston, an archaeologist at Brown University in Providence, Rhode Island, who helped interpret the tablet’s markings. “It’s a very momentous find.”
But many archaeologists are adopting a wait-and-see attitude, reserving judgment on the tablet’s importance.
They hope that more examples of the writing system will show up in future excavations. Until then, the skeptics question how old the artifact is, whether the tablet actually shows writing—and whether the find is a fake.
Lost in Translation
The rectangular tablet, found at a site known as Cascajal, looks like it came straight from the cartoon the Flintstones.
About the size of a legal sheet of paper, the tablet is 5 inches (13 centimeters) thick and weighs a hefty 25 pounds (12 kilograms).
The tablet bears a total of 62 symbols arranged in horizontal rows—unusual for Mesoamerican scripts, which typically use vertical rows.

The tablet contains 28 different markings. Some resemble ears of corn, clam shells, and bugs while others are abstract boxes or blobs. They’re grouped into pairs and meandering strings up to ten symbols long.
The writing system appears completely unrelated to others in Mesoamerica, such as Mayan writing.
Because of the tablet’s uniqueness and the small amount of text, there’s little hope of deciphering it without additional finds of the script, Houston says.
Mystery Solved?
The tablet, dated to 900 B.C., came from an ancient mound, where local workers were scavenging stones to build a nearby road.
When the workers found the tablet in 1999, the owner of the land could tell that the stone was special, Houston says.
The owner alerted local authorities, who called in two archaeologists, Maria del Carmen Rodriguez Martinez of Mexico’s National Institute of Anthropology and History and Ponciano Ortiz Ceballos of Veracruz University.
With the help of Brown University’s Houston and four other archaeologists, the team analyzed the tablet and its writings. 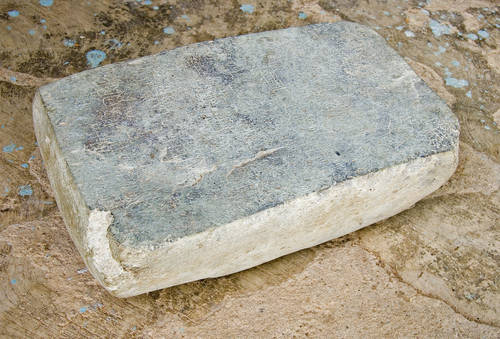 The researchers looked at the tablet’s patina—the coating of chemicals that forms on surfaces as they age. The scientists also examined pottery found in the same mound as the tablet.
Most of the artifacts date to around 1200 to 900 B.C., when the Olmecs were at the height of their influence.
Several neighboring cultures later developed their own writing systems, but until now no one had ever found Olmec writing. (Related: “Earliest Maya Writing Found in Guatemala, Researchers Say” [January 2006].)
“It’s been this black hole,” said Karl Taube, an archaeologist at the University of California, Riverside, who also worked on the tablet.
“There’s this incredibly developed civilization that had contact with the rest of Mesoamerica and a huge economic base,” Taube said. “But where was the writing?”
Jewelry, figurines, and a few pieces of ceramic had isolated symbols that might have been Olmec writing. But the tablet is the first clear sign this culture had a script.
The script draws from the culture’s “iconography”—meaningful symbols and stylized drawings that adorn monuments and figurines in the area.
“All the imagery really smacks strongly of Olmec,” Taube said.
The connection between the written symbols and the iconography from a specific period also helped confirm the tablet’s age.
Out of Place
But many archaeologists are hesitant about the find because of its uniqueness.
David Grove is an archaeologist at the University of Florida in Gainesville who was not involved in the research.
At first glance, the tablet “looked like a fake to me because the symbols are laid out in horizontal rows,” unlike the region’s other writing systems, he said.
Grove is also skeptical because some of the tablet’s symbols seem out of place, since they don’t show up in iconography until centuries later, he says.
Archaeologist Christopher Pool of the University of Kentucky in Lexington has known about the tablet for a couple years.
“I’ve always been a little skeptical of it,” Pool said.
“For one, it’s unique,” he continued. Another critical issue, Pool adds, is that when Rodriguez and Ortiz got the tablet, it was already removed from the ground, taking it out of its original archaeological context.
But Brown University’s Houston hopes the discovery will bring more attention to the area, driving the discovery of more examples of the script.
Archaeologist Mary Pohl of Florida State University in Tallahassee agrees.
The tablet is a “great discovery,” she said. “I suspect there will be more coming.”

Natives of Amazon rainforest may partly descend from blacks in Pacific