For other uses, see Onge (disambiguation).

The Onge (also Önge, Ongee, and Öñge) are an indigenous people of Little Andaman, one of the Andaman Islands in India. Traditionally hunter-gatherers, they are one of the Andamanese peoples and are designated as a Scheduled Tribe.[2] 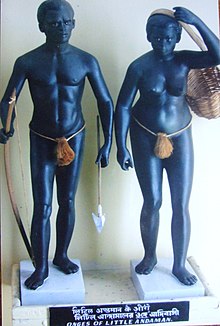 A depiction of Onge people in Kolkata Museum

Distribution of Andamanese tribes in early 1800s and 2004; the Onge areas are in blue.

In the 18th century the Onge, or Madhumitha, were distributed across Little Andaman Island and the nearby islands, with some territory and camps established on Rutland Island and the southern tip of South Andaman Island. After they encountered British colonial officers, friendly relations were established with the British Empire in the 1800s through Lieutenant Archibald Blair. British naval officer M. V. Portman described them as the "mildest, most timid, and inoffensive" group of Andamanese people he had encountered.[3][4] By the end of the 19th century they sometimes visited the South and North Brother Islands to catch sea turtles; at the time, those islands seemed to be the boundary between their territory and the range of the Great Andamanese people further north.[4] Today, the surviving members are confined to two reserve camps on Little Andaman, Dugong Creek in the northeast, and South Bay.

The Onge were semi-nomadic and fully dependent on hunting and gathering for food.

The Onge are one of the indigenous people of the Andaman Islands. Together with the other Andamanese tribes and a few other isolated groups elsewhere in Southeast Asia, they comprise the Negrito peoples.

Onge population numbers were substantially reduced in the aftermath of colonisation and settlement, from 672 in 1901 to barely 100.[5]:51[6]

A major cause of the decline in Onge population is the changes in their food habits brought about by their contact with the outside world.[7] The Onge are one of the least fertile people in the world. About 40% of the married couples are sterile. Onge women rarely become pregnant before the age of 28.[8] Infant and child mortality is in the range of 40%.[9] The Onge's net reproductive index is 0.91.[10] The net reproductive index among the Great Andamanese is 1.40.[11] 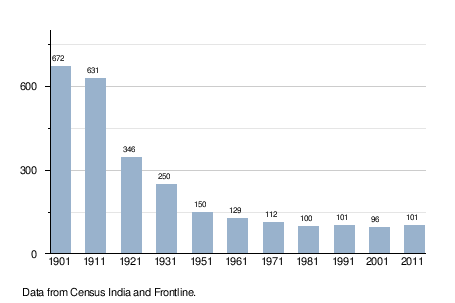 The semi-nomadic Onge have a traditional story that tells of the ground shaking and a great wall of water destroying the land. Taking heed of this story, all 96 tribesmen of the Onge survived the tsunami caused by the 2004 Indian Ocean earthquake by taking shelter in the highlands.[14]

In December 2008, eight male tribal members died after drinking a toxic liquid – identified as methanol by some sources – that they had apparently mistaken for drinking alcohol.[15] The liquid apparently came from a container that had washed ashore at Dugong Creek near their settlement on the island, but Port Blair authorities ordered an investigation into whether it had originated elsewhere. A further 15 Onge were taken to hospital with at least one critically ill.[16]

With their population estimated at only around 100 before the incident, the director of Survival International described the mass poisoning as a "calamity for the Onge", and warned that any more deaths could "put the survival of the entire tribe in serious danger". Alcohol and drug addiction have in recent years developed into a serious problem for the Onge, adding to the threats to their continued survival posed by outside influences.[16]

Bhopinder Singh, the Lieutenant Governor of the Andaman Islands, ordered an inquiry into the incident.[17]

The Onge speak the Önge language. It is one of two known Ongan languages (South Andamanese languages). Önge used to be spoken throughout Little Andaman as well as in smaller islands to the north, and possibly in the southern tip of South Andaman island. Since the middle of the 19th century, with the arrival of the British in the Andamans, and, after Indian independence, the massive inflow of Indian settlers from the mainland, the number of Onge speakers has steadily declined. However, a moderate increase has been observed in recent years.[18] As of 2006, there were 94 Onge speakers[19] confined to a single settlement in the northeast of Little Andaman Island (see map above), making it an endangered language.

A genome-wide study by Reich et al. (2009) found that the Onge Andamanese are most closely related to other Negrito populations in Malaysia and the Philippines. The study further showed that while the Onge are related to modern Indian people, they have none of the admixture from Neolithic Iranian farmers or steppe pastoralists which is widespread on the mainland. From this, they conclude that the Onge are solely descended from one of the ancient populations which contributed to the genetics of modern Indians.[20] According to Chaubey and Endicott (2013) Overall, the Andamanese are more closely related to Southeast Asians (as well as Melanesians and Southeast Asian Negritos) than they are to present-day South Asians.[21] According to Basu et al. (2016), the populations of the Andaman Islands archipelago form a distinct ancestry, which is "coancestral to Oceanic populations".[22]

Analysis of paternal lineages indicates that all Onge carry the Y-DNA Haplogroup D.[23] Maternally, the Onge also exclusively belong to the M clade, bearing the M2 and M4 subclades.[24][20][25] A 2017 study suggests that the Onge are derived from a lineage that trifurcated from East Asians and Australasians in ancient time.[26]