For an army beset with unprecedented casualties resulting from Shiloh, Antietam, Fredericksburg and other bloody battles, the ability to tap into an entirely new pool of recruits was a godsend – which is precisely what arrived on Jan. 1, 1863, when the Emancipation Proclamation declared that persons previously held as slaves “will be received into the armed service of the United States.” But it took another five months before the federal government decided just how to do that.
The 1860 Census counted about 100,000 free black men and over 500,000 male slaves of military age. While many of the latter were still behind Confederate lines, younger men able to withstand the trials of an escape to federal lines made up an unusually high percentage of the contraband population.
Initial efforts at recruiting African-Americans were clumsy, scattershot and often counterproductive. No one knew how to assign responsibility, which was haphazardly split among state governments, private groups like the Union League of Philadelphia and the military itself. In a March 1863 letter to Tennessee’s military governor (and future vice president) Andrew Johnson, Lincoln stressed the importance of black recruitment. “The colored population is the great available and yet unavailed of force for restoring the Union,” the president wrote. “The bare sight of fifty thousand armed, and drilled black soldiers on the banks of the Mississippi, would end the rebellion at once. And who doubts that we can present that sight, if we but take hold in earnest.”
Not until May 22, however, did the administration “take hold in earnest.” Secretary of War Edwin Stanton’s General Order 143 created the Bureau of Colored Troops, a part of the office of the adjutant general charged with recording “all matters relating to the organization of Colored Troops.”
Maj. Charles Foster, named chief of the bureau, set about implementing regional strategies to fill the ranks of the United States Colored Troops. The regiment, the organizational unit for the U.S.C.T., was composed of 10 companies, each of which ideally included a captain, 2 lieutenants, 5 sergeants, 8 corporals, 2 musicians and from 64 to 82 privates. 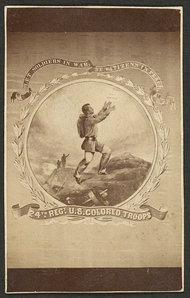 Library of CongressA poster for the 24th Infantry Regiment, U.S.C.T.

In the North, Foster delegated the authority to enlist black troops to state governments and to public and private organizations. Once a regiment achieved its minimum organizational strength, the bureau transferred control to the commanding general in the department where it was to serve. Recruiting in the Mississippi River Valley relied on impressment, as did efforts along the Atlantic coast. In the Border States, the military itself generally oversaw U.S.C.T. recruiting.
Enlisting colored troops, noted one Maryland soldier, “was attended with hardships, annoyances and difficulties without number…. Recruits were taken wherever found … The laborer in the field would throw down his hoe or quit his plow and march away with the guard, leaving his late owner looking after him in speechless amazement.” Loyal slaveholders received $300 from the federal government for each slave who enlisted, an amount well below the current market value of a slave.
The increasingly successful effort to recruit colored troops was the first step toward replenishing the Union Army’s ranks. Because the Lincoln administration was clear that no blacks were to command in the field, white officers were also needed to lead the troops. In late spring 1863, boards authorized by General Order 143 “to examine applicants for commissions to command colored troops” began meeting regularly in Washington; New Orleans; St. Louis; Davenport, Iowa; Nashville, Tenn., and Cincinnati to evaluate potential U.S.C.T. officers.
The boards sat six days a week to examine candidates who had recommendations from their commanding officers or “satisfactory recommendations of good moral character and standing in the community.” A member of the Washington board noted, “No person is wanted as an officer … who feels that he is making a sacrifice in accepting a position in a Colored Regiment, or who desires the place simply for higher rank and pay.” Candidates were expected to master tactics, Army regulations, general military knowledge, history, geography and mathematics. The higher the rank sought, the more the candidate was expected to know. One soldier seeking a colonelcy had to answer 293 questions. About 40 percent were rejected.
Those volunteering for leadership positions in the U.S.C.T. voiced a variety of motives — chief among them were sympathy for blacks, a desire to help elevate the race, a commitment to saving the Union, and personal advancement. One New York soldier saw it as the opportunity “to prove that I am what I have always professed to be — an Abolitionist.”
The high failure rate of the officer candidates prompted a unique and highly successful experiment in officer training. In December 1863, Philadelphia Unionists established the Free Military School for Applicants for Commands of Colored Troops. Soon weekly applications numbered almost 170, with between 24 and 30 prospective officers graduating every seven days. The program was rigorous. Students spent a month attending classes six days a week, drilling and participating in dress parades and studying at night. Candidates also worked closely with Camp William Penn, a nearby training depot for the U.S.C.T. In the nine months that the school operated, it produced 484 graduates who successfully passed their exams.
Over the course of the last two years of the war, 9,000 white soldiers applied to be officers in the U.S.C.T. Of the 4,000 who took the exam, about 60 percent passed and received a commission. A total of 178,975 African-Americans organized into 133 infantry regiments, 4 independent companies, 7 cavalry regiments, 12 regiments of heavy artillery and 10 companies of light artillery. Over a third of those men, 68,178, became casualties, including those who were killed in battle or suffered from sickness, wounds and other war-related injuries.
The Northern free states supplied 37,723 black troops, with Pennsylvania (8,612), Ohio (5,092), and New York (4,125) making the largest contributions. The Union slave states supplied 41,719, with Kentucky (23,703) leading the way. And Louisiana (24,052), Tennessee (20,133) and Mississippi (17,869) supplied more than two-thirds of the 93,542 U.S.C.T. recruits from the Confederate slave states.
Black troops quickly proved their worth, fighting with distinction in battles in Louisiana, Mississippi and South Carolina during May and June 1863. The assistant secretary of war, Charles A. Dana, wrote, “The bravery of the blacks in the battle at Milliken’s Bend completely revolutionized the sentiment of the army with regard to the employment of negro troops.” In a famous letter to James Conkling of Aug. 26, 1863, Lincoln articulated the political compact implicit in their service. “Negroes, like other people, act upon motives. Why should they do anything for us,” argued the president, “if we will do nothing for them? If they stake their lives for us, they must be prompted by the strongest motive — even the promise of freedom. And the promise being made, must be kept.”
The contributions of the U.S.C.T. to the Union victory were undeniable, as were the special dangers inherent in their service. While coping with a combat environment in which, if captured, they might well find themselves returned to slavery or summarily shot, black troops also faced hardships beyond the battlefield. Union officers often assigned them to the nastiest camp duties, they were inequitably paid for much of the war, and racism was an ever-present reality for most. Their reward was the promise of freedom and the chance to define their lives apart from slavery. As one white soldier observed, “Put a United States uniform on his back and the chattel is a man.”