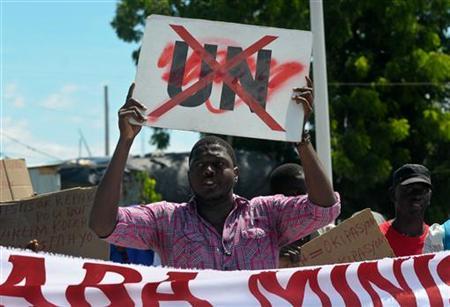 Demonstrators carrying signs march in Port-au-Prince September 23, 2011, as Haitian President Michel Martelly is scheduled to speak to the United Nations General Assembly in New York. Demonstrators accuse the United Nations Stabilisation Mission In Haiti (UNSTAMIH), also known as MINUSTAH, for bringing cholera into their country, for the rape and murder of their people and demand for their immediate withdrawal.

(Reuters) – Two U.N. peacekeepers from Pakistan have been sentenced to a year in prison for raping a 14-year-old Haitian boy after being convicted in a Pakistani military trial in Haiti, authorities said on Monday.

U.N. spokeswoman Sylvie Van Den Wildenberg said judges from a Pakistani military tribunal came to the impoverished Caribbean nation to hold the trial that resulted in the conviction last week of the peacekeepers. They were found guilty in the rape of the boy in the northern city of Gonaives on January 20.

The two soldiers, who have not been identified by name, were summarily discharged from the military and sentenced to a year behind bars in their homeland, the U.N. spokeswoman said.

“The U.N. was informed last week by the Pakistani officials about the verdict, but MINUSTAH (United Nations Stabilization Mission in Haiti) did not have any involvement in the military judicial process that was led by military judges from Pakistan,” she added.

It was the first time that members of the U.N. military on deployment in Haiti have been tried and sentenced within its borders.

The U.N. peacekeeping mission has faced a growing image problem in Haiti, with some of its members accused of responsibility for introducing a deadly cholera epidemic in earthquake-stricken country in 2010.

Several peacekeepers have also been accused of rape, in addition to the Pakistanis, in cases that have fueled public protests and demands that members of the U.N. force be stripped of their immunity and face trial in Haitian courts.

Haitian Justice Minister, Michel Brunache called the verdict for the two Pakistanis a “small” step in the right direction.

“We expected more from the U.N. and the Pakistani government, but now we want to focus on the proper reparation that the victim deserves,” Brunache said.

Haitian government authorities were given no advance notice of the military tribunal, he said.

(Editing By Tom Brown and Will Dunham)

‘Rise and Fall of Apartheid’ at Center of Photography