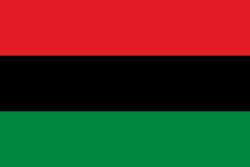 The red, black, and green Pan-African flag designed by the UNIA in 1920.

The Pan-African flag, also referred to as the UNIA flag,Afro-American flag or Black Liberation Flag, is a tri-colorflag consisting of three equal horizontal bands colored red,black and green. The Universal Negro Improvement Association and African Communities League (UNIA) formally adopted it on August 13, 1920 in Article 39 of the Declaration of Rights of the Negro Peoples of the World, ]during its month-long convention held at Madison Square Garden in New York City, United States. Variations of the flag can and have been used in various countries and territories in Africa and the Americas to represent Pan-Africanist ideology. Various Pan-African organizations and movements also often employ the flag’s colours for their activities.

The three Pan-African colors on the flag represent: 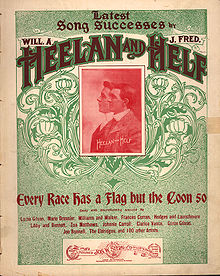 Sheet Music for “Every Race Has a Flag but the Coon“

The flag was created in 1920 by the members of the UNIA in response to the enormously popular 1900 coon song “Every Race Has a Flag but the Coon,”[4] which has been cited as one of the three coon songs that “firmly established the term coon in the American vocabulary”. A 1921 report appearing in the Africa Times and Orient Review, for which Marcus Garvey previously worked, quoted him regarding the importance of the flag:

Show me the race or the nation without a flag, and I will show you a race of people without any pride. Aye! In song and mimicry they have said, “Every race has a flag but the coon.” How true! Aye! But that was said of us four years ago. They can’t say it now….

Alternatively, it has been explained by journalist Charles Mowbray White that Garvey proposed the colours for the following reasons: “Garvey said red because of sympathy for the ‘Reds of the world’, and the Green their sympathy for the Irish in their fight for freedom, and the Black- [for] the Negro.”

The flag later became an African nationalist symbol for the worldwide liberation of people of African origin. As an emblem of Black pride, the flag became popular during the Black Liberation movement of the 1960s. In 1971, the school board of Newark, New Jersey, passed a resolution permitting the flag to be raised in public school classrooms. Four of the board’s nine members were not present at the time, and the resolution was introduced by the board’s teen member, a mayoral appointee. Fierce controversy ensued, including a court order that the board show cause why they should not be forced to rescind the resolution, and at least two state legislative proposals to ban ethnic or national flags in public classrooms other than the official U.S. flag.

In the United States, the flag is presently widely available through flag shops or ethnic specialty stores. It is commonly seen at parades commemorating Martin Luther King, Jr. Day, civil rights rallies, and other special events.

The flag goes by several other names with varying degrees of popularity:

Although other designs are also considered to be International African flags or Pan-African flags, the horizontal stripes of red, black, and green, originated by the UNIA in 1920, is the design most often referenced.

The Biafran flag another variant of this one, with a sunburst in the center.

The flag of Malawi is very similar. Between 2010 and 2012 it was changed to reflect the pan-African flag’s order of stripes.

The Rasta flag is three horizontal stripes, descending green, yellow, and red. It is was inspired by the Ethiopian flag/Eritrean flag.

The United States Postal Service issued a stamp in 1997 to commemorate Kwanzaa with a painting by fine artist Synthia Saint James of a dark-skinned family wearing garments traditional in parts of Africa and fashionable for special occasions among African-Americans. The family members are holding food, gifts, and a flag. The flag in the stamp may have been meant to represent the Pan-African flag, However, instead of the stripes descending red, black, and green, the stamp’s flag transposes the top two bands and descends black, red, and green.

In 2000, artist David Hammons created a work called African-American Flag, which is held by the Museum of Modern Art in New York City. Based on the standard U.S. flag, its stripes are black and red, the field is green, and the stars on the field are black.

In response to the controversy over the flying of the Confederate Southern Cross, an African-American run company called NuSouth created a flag based on the Confederate Naval Jack, with the white stars and saltire outline replaced by green and the blue saltire made black.

The Flag of Kenya is also very similar to the red, black and green flag.

The Flag of Saint Kitts and Nevis is also similar.

June 14 is celebrated as Flag Day in the U.S. In 1999, an article appeared in the July 25 edition of The Black World Today suggesting that, as an act of global solidarity, every August 17 should be celebrated worldwide as Universal African Flag Day by flying the red, black, and green banner. August 17 is the birthday of Marcus Garvey.

Why we must save Mali