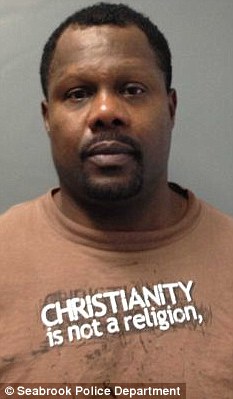 Charged: Kerry Dean Parks, 50, is accused of whipping his adopted son with a leather belt and pouring salt, vinegar and alcohol on the wounds

A couple from Seabrook, Texas are accused of beating their 11-year-old son with a leather belt and applying salt, vinegar and alcohol to his wounds.

According to the criminal complaint against the pair, the boy had to be hospitalised after officers found him curled on a sofa in the foetal position, with ‘bandages applied to his waist, buttocks and rear thigh area with bodily fluids seeping through them.’

Kerry Dean Parks, 50, and Merilyn Parks, 35, have been charged with causing serious bodily injury to a child.

The Houston Chronicle reported that Mr Parks was arrested yesterday at an apartment in Houston, while his wife remains at large.

Police attention was drawn to the case when staff at Seabrook Intermediate School asked them to investigate the child’s welfare on January 4.

He was promptly taken to Texas Children’s Hospital, and later transferred to Shriner’s Hospital for Children in Galveston.

The boy told investigators his adoptive father Kerry Parks had beat him with a leather belt ‘approximately once or twice a day’ between October 1 and December 24 2011.

The abuse took place at the home they shared with his mother, Merilyn Parks, and his baby sister.

After beating his adopted son, Parks allegedly applied alcohol, salt and vinegar to the injuries on an almost daily basis.

Court records state that on many occasions Parks ‘would remove bandages previously placed on these injuries, which also caused great pain, and after the chemicals were put on the injuries the defendant would apply the bandages.’

The week before Christmas, investigators said, Parks ‘would use his hands to smash the left and right sides of the (victim’s) head into a decorative column near the top of the stairway.’ 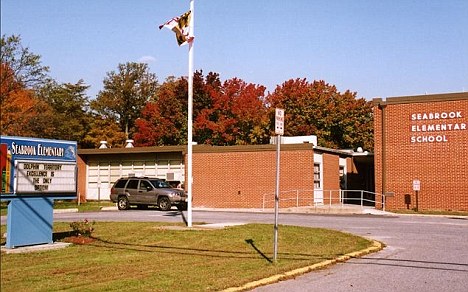 Seabrook Elementary School: The boy was taken into hospital after teachers raised concerns about his welfare

The boy’s mother told police she had bought bandages for her son, but never attempted to stop her husband’s sadistic beatings, or take the boy to a doctor or hospital.

Both the boy and his 11-month old sister are now in the custody of the Child Protective Services.

Agency spokeswoman Estella Olguin said the boy has been placed in a foster home, while the girl is staying with family members.

‘It’s the best situation,’ Ms Olguin said. ‘When you’ve got abuse allegedly being perpetrated by one parent and the other parent fails to protect (the child) or report the abuse, then they’re obviously not capable of protecting that child and the child should not stay in that home.’

Seabrook Police are asking anyone with information on Merilyn Parks’s whereabouts to contact them on 281-291-5610.

London police try to identify stowaway who fell from the sky