In 1904 two black men were arrested in Statesboro, Georgia, for a particularly gruesome mass murder of a white farmer, his wife, and their three children. The accused were kept in Savannah, about fifty miles away, to allow tempers to cool. After two weeks the accused were brought to Statesboro for trial and were found guilty. As the judge pronounced their sentence, death by hanging, a mob stormed into the courtroom, seized the men, dragged them outside, and burned them alive. As the convicted men were roasting alive, the mob turned on other blacks, singling out anyone perceived to be a threat to the white order. In this case, as in many lynchings, the punishment was not merely intended for the accused: the mob would use the lynching as the starting point for a general riot and attack on any black person it could find.
http://www.encyclopedia.com/doc/1G2-3468300151.html Paul Reed; Will Cato; Negroes lynched by being burned alive at Statesboro; Georgia.

Read a detailed account of the Statesboro, Georgia Lynchings and riot of 1904 published by “The Georgia Historical Quarterly”   fopm the book entitled “A Lynching at Statesboro: The Story of Paul Reed and Will Cato”

But no news, national or regional, was as frequent as that of racial conflict and lynchings. “The problem of the Twentieth Century is the problem of the color-line,” W.E.B. DuBois wrote in his 1903 book “The Souls of Black Folk.” Eva Poole, 92, remembers the strained race relations and the lack of freedoms blacks had during that era. “You didn’t have privileges, it was just about like you were in slavery almost,” Poole said. “You couldn’t say what you wanted. You couldn’t go where you wanted and you couldn’t do what you wanted.” The tensions could quickly erupt into violence in instances when a black person was accused of stepping over the boundaries set by 1900s white society. One of the most widely publicized lynchings to occur in this region happened in Bulloch County in 1904. Two black men, Will Cato and Paul Reed, were doused with oil and burned at the stake after an all-white jury convicted them of murdering a white family of five. Police rounded up about a dozen black men after finding Henry R. Hodges and his family murdered and their home set ablaze. They claimed the crime was part of a robbery masterminded by a “black Mafia” that was forming in Bulloch County. The bizarre theory alleged that black ministers who led the group were ordering members to rob and murder whites who were mean to blacks. Despite the numerous arrests, the police settled on Cato and Reed as their final suspects. Angry whites from surrounding counties were drawn to the trials by lynching rumors printed in the Savannah Morning News. The rumors and unsubstantiated stories about the murdered Hodges children offering their pennies in return for mercy helped vilify Cato and Reed before the trial even started.

The stories assumed the guilt of the suspects and sensationalized headlines such as, “WILL LYNCH PRISONERS AS SOON AS CONVICTED” fueled the mob frenzy. “People who know the feelings of a large element in Bulloch County say that the chances of the murderers being legally hung are very slim, and that avenging of the killing of the Hodges Family will be at the hands of those in the community where the crime was committed. They look for something to happen as soon as the Negroes have been tried and sentenced, if not before,” an Aug. 15, 1904 article said. About 1,000 men, with guns and whiskey in tow, showed up for the trial. They crowded the Bulloch County Courthouse the day the all-white jury delivered the final guilty verdict and the judge sentenced Cato and Reed to hang. But the verdict didn’t satisfy their demands for vengeance. The mob waited until most of the unarmed infantry soldiers guarding the courthouse were gone and, according to the soldiers’ reports, stormed the building and kidnapped Cato and Reed with the help of the Bulloch County Sheriff and his deputies. Nooses were placed around the necks of the condemned men and they were dragged down North Main Street to various sites until the mob decided on a clearing two miles northwest of town. Cato and Reed were tied with ropes and chains to a tree stump, each man was doused in 10 gallons of oil and burned alive before a cheering crowd. Hundreds of citizens brought their children to the scene to gather souvenirs, according to newspaper accounts. The lynchers and spectators didn’t fear reprisals, the paper reported. Two youngsters even presented the judge with charred pieces of Cato and Reed’s bones the following day. Cases against several lynchers were eventually presented to a grand jury, but there was no expectation or public desire for them to be punished and no one was indicted. 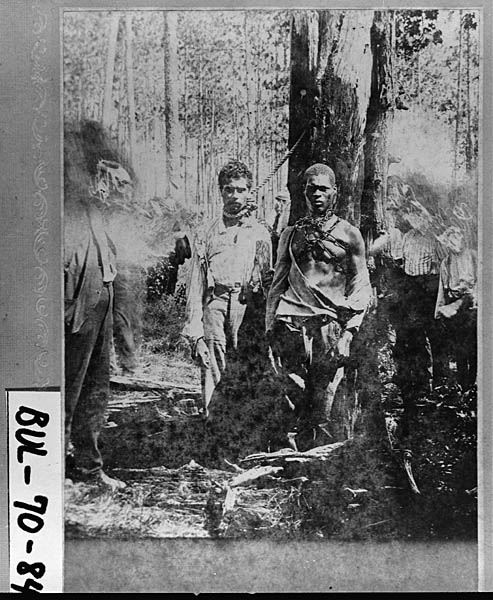 Photograph of Will Cato and Paul Reid, Bulloch County, Georgia, 1904 Aug. 16
Vanishing Georgia collection, Georgia Archives  just before they were burned at the stake

How it was reported in Morning News
But perhaps almost as shocking as the mob actions were the actions of theSavannah Morning News. The paper was in full knowledge of the mob’s lynching plans well before the trial, but didn’t try to prevent it by alerting authorities. In fact, a reporter attended the planning sessions, accompanied the mob to the lynching and photographed Cato and Reed before, during and after they were burned. “Monday night a meeting was held to discuss the final details and the presence of military decided the majority in favor of taking the men out of the city limits, and if possible to the scene of their crime. Oil was stored away and committees appointed. The names of these men were not given. When this information was given to the Morning News correspondent he was made to understand in no uncertain manner that a divulgence of any of these plans would provoke trouble. The too general discussion of these plans account for the calling in of the military from Savannah, the rumors having reached the ears of Mayor Johnson and other prominent citizens not in sympathy with the lynchers,” an Aug. 17, 1904 story said. The Savannah Tribune, one of Savannah’s black newspapers, was more vocal about the injustice of the Statesboro lynchings. Many black newspapers were formed in the years following Reconstruction to protest the deterioration of black freedoms. “As far as the present grand jury of Bulloch County is concerned, the lynching of the Negroes, Cato and Reed, will go free. The Jury adjourned Saturday about noon without returning any indictments against the rioters of Aug. 16,” the Savannah Tribune’s main story on Nov. 5, 1904 stated. “The action of the grand jury in not finding indictments against any of the lynchers was no surprise to the people. It was expected by the people generally that no bills would be found … They feel that even if the grand jury should find true bills that there would be no hope of convicting and the matter would be agitated for years and be a source of constant annoyance to the people.”
Lynchings were done in public, oftentimes photographed and celebrated, but whites involved in the mob actions were rarely, if ever, punished. And because blacks were excluded from juries and had no political power they rarely sought or expected justice from such behavior. The Tribune story said the grand jury examined 50 witnesses and failed to get the names of those responsible for the lynching. It inferred that there was no justice for blacks in white society and that the white majority was willing to accept mob justice for blacks, no matter how cruel and unusual, as a deterrent. “The people regret the unfortunate occurrence, but the crime of Reed and Cato was such that they are willing to forgive the lynchers. They are opposed to doing anything that looks like protection to the dangerous Negro element and prefer for them to see what is likely to happen if they attempt assault and wholesale murder,” the article said. The Cato and Reed frenzy sparked more white-on-black violence in Statesboro. Just before their trial, two black women were pulled from church and “whalebone buggy whips were worn out on them,” because two young white girls accused them of pushing them off of a sidewalk. 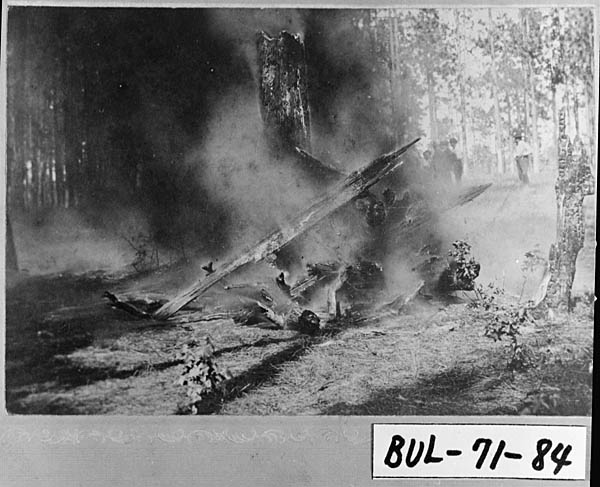 
Racial violence spreads
The day after Cato and Reed were lynched, the newspaper reported that blacks were being whipped and beaten by mobs almost nightly. Many whites believed that there was still a ring of black criminals in town and others were just taking their fears and frustrations out on whoever was available, according to the reports. An unidentified black man was found,”shot to pieces,” on Lott’s bridge in Statesboro and an elderly black man named Albert Roberts was shot and killed in his Statesboro home. Roberts’ 17-year-old son was also wounded in the incident, in which a mob selected their house at random and riddled it with bullets. Following the mob activity in Statesboro many black residents packed their things and left. The exodus was so great that whites feared the cotton and turpentine industries would suffer for the lack of labor.

The Savannah Morning News wrote about many other lynchings, murders and race riots that occurred in the region and other parts of the country during that era, including the Aug. 28, 1904 shooting death of Sebastine McBride by a mob of five whites in Portal; the Aug. 29, 1904 lynching of Fitzgerald murder suspect A.L. Scott; and the March 30, 1902 disappearance and alleged mob burning of murder suspect Richard Young in Savannah. Young was accused of murdering a white boy named Dower Fountain and assaulting his mother, Lilla Fountain, during a burglary attempt. Fountain’s relatives formed a small posse and went after Young on the night of his disappearance. A black man reported that they had captured Young on Ogeechee Road and burned him on a pyre of crossties and brush. But neither the coroner nor the sheriff would investigate. Members of the posse said they saw a fire in the woods that night but couldn’t remember exactly where. Because no one could prove Young was dead, authorities dropped the case. Morning News reports suggested that Young was either hiding out on river islands or had been killed by black river pirates. Blacks rarely ever made headlines in the Savannah Morning News during the 1900s unless they were lynched or accused of a crime. Poole said her family did not subscribe to the Savannah Morning News in those days. But when she started working in the home of a white family in 1915 she recalls listening to them discuss Morning News articles that had an impact on the black community. “They used to take the paper and we found out about what was going on through them talking,” Poole said. “I remember one time the phone rang and the man jumped up and got his gun and left. They said he was going to Bulloch County to help somebody try and lynch someone.”