Study has shown scientists how to find and measure ‘good cells’ that can recognise and kill infected cells, but they still do not know how to generate them

It has long been known that a tiny minority of people infected with HIV have a natural ability to fight off the deadly AIDS virus. Scientists said they are now a step closer to understanding why.

In a study they said holds promise for an HIV vaccine, researchers from four countries reported the secret lies not in the number of infection-killing cells a person has, but in how well they work.

Only about one person in 300 has the ability to control the human immunodeficiency virus (HIV) without drugs, using a strain of ‘killer’ cells called cytotoxic T lymphocyte (CTL) cells, previous research has found. 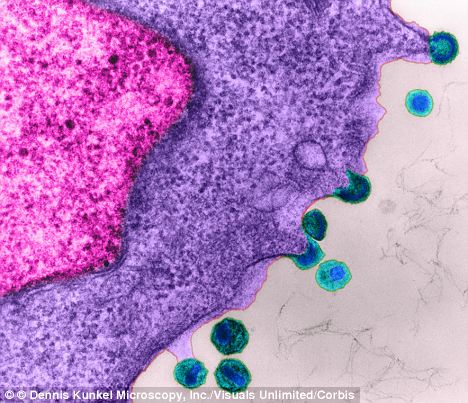 Mature HIV virus infection (blue) in human lymphatic tissue. One in 300 people have ‘killer’ cells that recognise and destroy the HIV infection

Taking that discovery further, scientists from the United States, Canada, Japan and Germany reported that the strain has molecules called receptors that are better able to identify HIV-infected white blood cells for attack.

Until now, it was well known that people with HIV ‘have tonnes of these killer cells,’ said Bruce Walker, an infectious diseases expert at the Ragon Institute in Massachusetts.

‘We have been scratching our heads since then, asking how, with so many killer cells around, people are getting AIDS. It turns out there is a special quality that makes them (some cells) better at killing.’

The study looked at 10 infected people, of whom five took antiretroviral drugs to keep HIV under control while five were so-called elite controllers who remained naturally healthy. 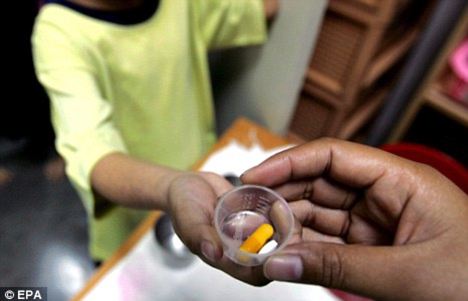 Drugs can already reduce HIV transmission by 96 per cent

‘What we found was that the way the killer cells are able to see infected cells and engage them was different,’ Mr Walker told AFP.

‘It is not just that you need a killer cell, what you need is a killer cell with a (T cell) receptor that is particularly good at recognising the infected cell. This gives us a way to understand what it is that makes a really good killer cell.’

Mr Walker said attempts at creating vaccines had so far failed because the T cell receptors they generated were not the efficient type.

But while the research has showed scientists how to find and measure the good cells, they still do not yet know how to generate them.

‘The next step is to determine what it is about those receptors that is endowing them with that ability,’ he said.

‘HIV has revealed another one of its secrets and that is how the body is able to effectively control the virus in certain individuals.

‘Each secret that HIV reveals is putting us in a better position to ultimately make a vaccine to control the virus.’

Cancer Screening Budget Cuts May Prove Deadly for Some Women