In reality, African-American prisoners of war were killed en masse. Black troops in action endured lower wages and poorer medical care and living conditions than their white counterparts. But soldiers of both races did have surprisingly easy access to the luxury of photography.

Photographers ran government-sanctioned booths near encampments, selling souvenir portraits. The images of black personnel, from officers to gravediggers, are now on view widely in 150th-anniversary commemorations of the Emancipation Proclamation. They provide a nuanced view of African-American life at the front, even though some of the subjects can no longer be identified.

“There’s a lot of interpretation that comes in,” the Manhattan photography dealer Thomas Harris said, while leafing through an album of Civil War photographs that took two decades to assemble. He has acquired images of Nick Biddle, a black Pennsylvanian who was attacked by racist onlookers while marching in Baltimore, and Albert Bailey, an African-American sailor who served on ironclads. 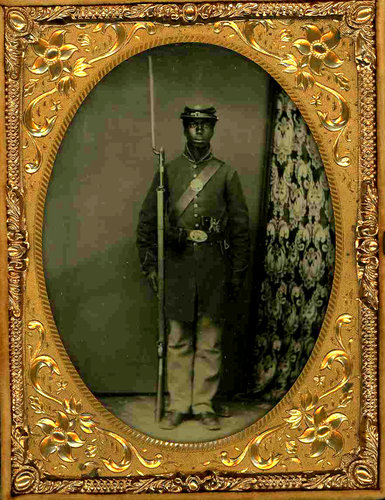 At the National Portrait Gallery, an ambrotype of a black Civil War soldier. Images and artifacts pertaining to the experience of black troops at that time are gaining in popularity.

Mr. Harris has lent three photos of black privates on duty at a Confederate prison camp near Rock Island, Ill., to a show that opens April 2 at the Metropolitan Museum of Art, “Photography and the American Civil War.”

The Smithsonian’s National Portrait Gallery and National Museum of American History in Washington both have exhibitions now with images of African-American soldiers. A show focused on the 54th Massachusetts Regiment, led by Robert Gould Shaw, a white colonel, opens next month at the Museum of African American History in Boston. The National Gallery of Art in Washington has an exhibition opening this fall about the 54th and the sculptor Augustus Saint-Gaudens’s memorial to Shaw.

The Smithsonian’s National Museum of African American History and Culture, now under construction in Washington, has been building and lending its collection of Civil War portraits and evidence of triumphs and suffering. It was recently given a silver medal, one of about 200 that Gen. Benjamin F. Butler awarded to black veterans, inscribed “Distinguished for Courage.” It bears the soldier’s initials, but his full name has not yet been determined.

The donor’s family had found it at an estate sale, without much provenance information, but with a well-preserved ribbon attached. “It was treasured and kept safe,” said Michèle Gates Moresi, the museum’s curator of collections.

Postwar portraits of black veterans in uniforms bedecked with medals are on view through March 16 in “Visualizing Emancipation,” at the Schomburg Center for Research in Black Culture in Manhattan. The show (with a related book, “Envisioning Emancipation: Black Americans and the End of Slavery,” from Temple University Press) also includes photos of Nick Biddle and two of Frederick Douglass’s sons, Charles Redmond and Lewis Henry, dressed for battle.

“Colored and white ladies and gentlemen left the city of Philadelphia in carriages, hacks, omnibuses and cars, for the camp of the colored soldiers to see them drill, and to see a flag hoisted,” a newspaper reported in 1863. The visitors using public transportation, Mr. Scott notes, would have been strictly segregated.

Such paradoxes often surprise researchers in the field. “There are all these twists and turns that just kind of boggle your mind,” the historian Linda Barnickel, author of “Milliken’s Bend: A Civil War Battle in History and Memory” (Louisiana State University Press), said in a phone interview.

Her book, about an 1863 Confederate assault near Vicksburg, Miss., recounts how former Louisiana slaves fighting there were recaptured and sent back to plantations. Yet a Texas general praised their “considerable obstinacy” on the battlefield. A female slaveholder in the area pondered in her diary whether she should pay her slaves, to tempt them away from Union Army wages.

Scholarly discoveries have appeared on the market as well. In October the 1860s diary of a white lieutenant, Adoniram J. Hastings, who led African-American troops, brought $1,400 at Gateway Gallery Auction in Chambersburg, Pa. A few weeks ago a photo of Luther Hubbard, a black sergeant stationed in South Carolina, sold for $2,560 on eBay. Hubbard had posed against a studio’s formal painted backdrop of a garden colonnade.

In a March 21 sale of African-Americana, Swann Auction Galleries in New York will offer portraits of Alexander H. Johnson ($750 to $1,000), a Massachusetts drummer boy, and of a decorated officer ($3,000 to $5,000) tentatively identified as Christian Fleetwood, who impressed Butler by carrying Union colors through fallen comrades near Richmond.

On Saturday the filmmaker Thomas Allen Harris is hosting a Digital Diaspora Family Reunion Roadshow at the Schomburg Center, part of a series of open houses seeking photos and anecdotes. (With the historian Deborah Willis, he is also making a documentary due this fall, “Through a Lens Darkly: Black Photographers and the Emergence of a People.”)

Previous open houses have attracted artifacts dating to the 1860s. “It’s amazing how much stuff emerges, how much material is in people’s homes,” Mr. Harris said in a phone interview.

Exhibiting feathered objects can be a dicey proposition. Importing them is complicated because of government regulations meant to protect endangered birds, and shocks in transit can damage fragile quills.

So when the Manhattan tribal art dealer Charles Moreau told colleagues that he was organizing a show of feathered pieces from the Amazonian basin (through March 9), they discouraged him. The typical reaction, he said during a recent gallery tour, was, “Charles, you’re crazy, you’re going to end up in jail.”

The gallery, Moreau & Montagut, is offering a Brazilian crown made of straw and toucan feathers ($4,000), which has long been legally on the market and belonged to the British collector James Thomas Hooper. Wooden clubs, paddles, vessels and masks have prices starting around $2,000.

A few wispy feathers are attached to the back of one drawing. “Maybe it was a gift for the anthropologist,” Mr. Moreau said.

Can you compare African slave trade to the Holocaust?