Members of a cannibal cult in Papua New Guinea have been charged with the murders of seven suspected witch doctors.

The 29 people, including a 13-year-old boy, butchered five men and two women believed to practice ‘black magic’, allegedly ate their brains raw and made soup from their genitalia in the remote jungle region around the town of Madang. 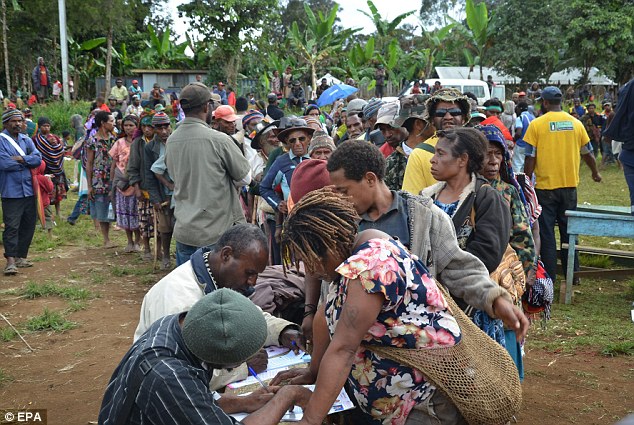 Disrupted: Voters line up to cast their ballots in Tari in Papua New Guinea’s highlands last month during a two-week vote which has been delayed a series of cannibalistic killings of suspected sorcerers On guard: The murders, carried out by a cult which has set out to tackle extortion by self-proclaimed sorcerers, has caused voters to fear for their safety

Mr Wagambie said that the killers believed that the victims were practicing sorcerers and that they had been overcharging poor villagers as well as demanding sexual favours in return for their services.

The arrests have delayed elections in the Commonwealth country as voters are deterred from taking part.

They have hampered the two-week ballot currently taking place as people, particularly those near the cult’s headquarters, have been fearing for their safety.

The ballot was due to end today, but voting is now expected to finish next week.

Further delays have been caused by allegations of bribery, vote rigging and problems getting to the ballot boxes. Part of the culture: Sorcery and witchcraft is widely believed in Papua New Guinea, which brought in a Sorcery Act to protect against attacks on those accused of practising black magic (file picture)

The cult started out attempting to tackle extortion by self-proclaimed sorcerers who were demanding money from the sick.

A local political activist told The Sydney Morning Herald that sorcery was ‘getting of hand’ in the villages.

They said: ‘It used to be a good thing, but now it’s turned into a kind of cult.

Sorcery and witchcraft is widely believed in the South Pacific nation and many people seek alternative explanations to misfortune, illness, accidents or death.

The country brought in a Sorcery Act to protect against attacks on those accused of practising black magic.

The cost of a witch doctor revealing a cause of death or casting out an evil spirit is usually 1000 New Guinean kina (£303), plus a pig and a bag of rice, but according to local police the victims were charging more and were also demanding sex as payment.

The leader of the cult is reportedly still on the run.

Four of the seven victims were murdered last week.

Mr Wagambie said that no remains had been recovered, adding: ‘They’re probably all eaten up.’