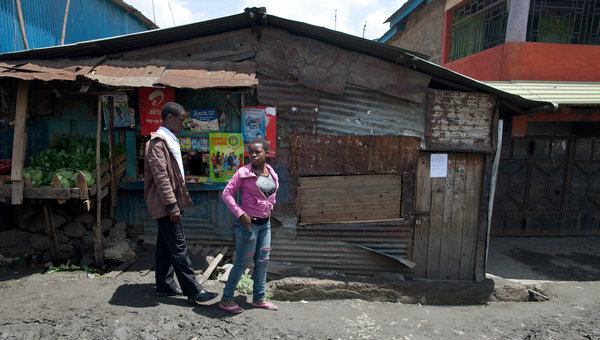 John Kioko Muthini’s sister Susan outside the Nairobi pool hall where he died.

NAIROBI, Kenya — John Kioko Muthini, a high school student, was playing pool with his friends a little more than two weeks ago in a slum on this city’s fringe when two police officers walked in, looking for a thief. They ordered everyone to their knees, and then, numerous witnesses said, they shot Mr. Muthini in the head.
His friends said that his last words, as he begged for his life, were “It’s not me.”
Last weekend, in a remote valley in northern Kenya, several dozen rookie police officers were sent to chase down an especially tough gang of cattle rustlers. It was dark, about 4 a.m., and the rustlers knew the officers were coming. As soon as the officers marched in, single file, they were mowed down by automatic weapons. Police officials said that at least 30 officers, maybe more, were killed, with their bodies left to fester in the sun for several days.
The two episodes were hundreds of miles apart and technically had nothing to do with each other. But beneath them was the same rotten root: a spectacularly dysfunctional national police force.
“On a scale of 1 to 10, I would give our police a 2,” said Macharia Njeru, the chairman of Kenya’s new police oversight board, citing corruption allegations, human rights abuses, extrajudicial killings, failed inquiries and lost public trust. 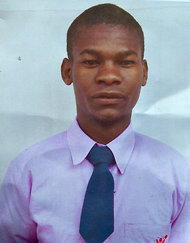 John Kioko Muthini was shot by police officers in Nairobi.

“The list is endless,” Mr. Njeru said.
In the grittier parts of this city, where people inhabit tiny tin shacks and bloated dead animals float along garbage-strewn rivers, police officers are not known as heroes. Instead, many residents see them as a menace, prowling around in dark trench coats with AK-47s slung over their shoulders, extorting money from slum dwellers and killing alleged suspects — and sometimes not even suspects but simply poor people they come across.
“They kill for free,” said one young man in the Mukuru Kayaba slum, where Mr. Muthini was shot.
Last week, Mr. Muthini’s father, Muthini Ndeto, waited in a crowd outside the morgue to claim his son’s body. Men in white lab coats and white swamp boots told everyone to stand back, and then they wrenched open the morgue door, letting out the stench of rotting flesh.
About a dozen corpses lay twisted on stainless steel tables, many victims of recent crime, with no identification, torn up clothes and faces sticky with blood.
Mr. Ndeto trudged in and looked hard at his son. “Why couldn’t they have taken him to the station?” he asked. “Why did they have to kill him on the spot?” 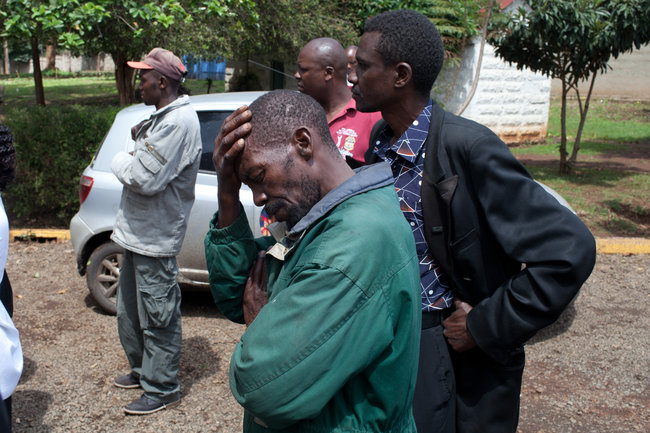 Muthini Ndeto waiting to claim the body of his son, John, a student shot dead by officers in an episode considered to be typical of the police force.

The Kenyan police force is consistently rated one of the most corrupt public institutions in East Africa. It has about 70,000 officers, with a starting salary of around $200 a month.
Young men in the Mukuru slum said the same two police officers who killed Mr. Muthini routinely shook them down for bribes, threatening to lock them up if they did not hand over the equivalent of 10 or 20 dollars, a week’s wage for most around here.
Mr. Muthini’s mother, Rose, said the police had been harassing them for months, demanding a $250 bribe, an impossible sum for a family who lives in three iron-sided rooms in a muddy slum where there are so few latrines that people relieve themselves in plastic bags and then hurl them as far away as possible — “flying toilets,” they’re called.
She acknowledged, with downcast eyes and quiet words, that her oldest son, Charles, was a petty thief whom the police were looking for the day her other son, John, was killed. Charles picked pockets and filched cellphones but he left home long ago, she said, which was why she was pinning her hopes on John, a lanky 21-year-old who was doing quite well at the neighborhood Catholic school.
When she refused to pay off the police, she said, the officers walked away, laughing, and told her to start digging Charles’s grave.
“Police in Kenya frequently execute individuals,” reads a United Nations report from 2009 that looked into the issue of extrajudicial killings. “Most troubling is the existence of police death squads.”
In just one five-month period in 2007, the report said, the police were suspected of killing hundreds of people.
Kenyan police officials did not respond to phone calls or text messages for this article, or a list of questions e-mailed to Eric Kiraithe, the police spokesman.
The top police brass have come under siege over the past few days for the massacre in northern Kenya, and Mr. Njeru said his oversight board had opened an investigation. It appears that the young officers were sent straight into a bitter, long-running cattle feud between two rival ethnic groups and that the rustlers believed the police were siding with their historic enemy.
“On the face of it, it’s quite clear that the police leadership totally failed,” Mr. Njeru said. “The senior commanders were sleeping on the job.”
Kenya’s news media have characterized the massacre as the single most disastrous episode for the Kenyan police since independence in 1963. Unlike Kenya’s thriving business community, its booming safari industry or its reforming judiciary, Mr. Njeru said, the national police service has intentionally been kept weak for decades so it could be manipulated by politicians.
The Kenyan government announced on Wednesday that it was sending the army to fight the cattle rustlers. With a major election scheduled for March, many are worried about whether the police force will be able to handle the political and ethnic tensions that often explode at election time. Riots erupted along Kenya’s coast in August after a Muslim cleric was gunned down; many of his followers were convinced it was the police.
The police problem is now so vexing that one of the most engaging movies to be made in Kenya in years, “Nairobi Half Life,” features two corrupt officers who shake down criminals and then kill them.
At the end of the movie, as the likable criminals are trapped in a secret jail run by the two rogue cops, one of the movie’s stars says in Swahili: “Sisi watu, si ni maiti,” which means: “We are corpses.”
Mr. Muthini’s family said that on Friday evening, Charles, the petty thief, was killed, his body found along a road near Nairobi’s airport.

6-yr.-old boy is killed after being hit by truck while crossing guard was on a bathroom break