An ongoing criminal case against a former top aide to Florida Lt. Gov. Jennifer Carroll is developing into a swirl of allegations about improper relationships and widespread illegal taping of phone calls inside Carroll’s office.

The allegations, which Carroll denies, were included in a court filing made late last week by the attorney representing Carletha Cole who was fired from her job.

Cole, 48, was arrested last October on charges that she gave an illegally taped conversation with another aide to a newspaper reporter. 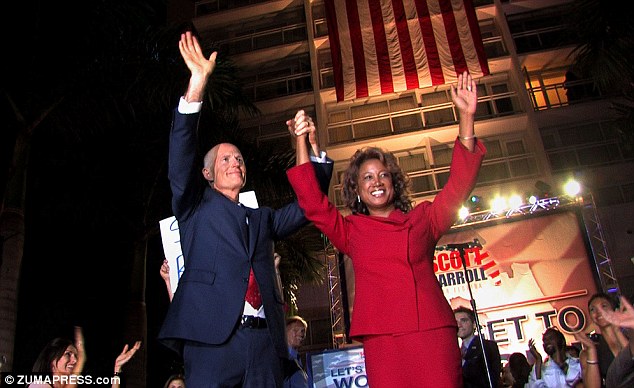 Sex scandal: Florida governor Rick Scott and his deputy Jennifer Carroll have been mired in allegations from a former aide about affairs and phone tapping

Cole’s attorneys made the filing in response to prosecutors’ attempts to seal some evidence in the case.

In the most sensational claim, Cole said she witnessed Carroll and a top aide, Beatriz Ramos, in a ‘compromising position’ inside Carroll’s office.

She also claimed that Carroll’s chief of staff secretly recorded conversations routinely at the direction of those working for Gov. Rick Scott, and that the trash can at Cole’s desk might have been deliberately set ablaze following an argument between her and Ramos.

Cole also said Ramos was living at Carroll’s home and at one point she was ordered by Ramos to find adjoining hotel rooms for the pair when they traveled.

The disgruntle aide said that she was ‘scolded’ by Carroll’s security team when she placed Ramos next door to Carroll when the lieutenant governor and her husband traveled to Puerto Rico last summer. 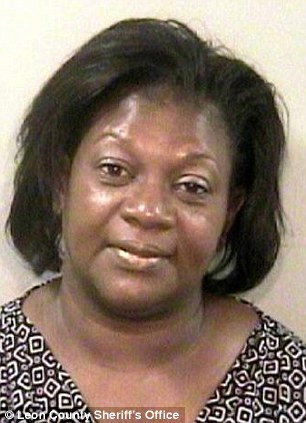 Sensational: Carletha Cole, 48, was fired from her job and is on trial for giving an illegally taped phone conversation to a newspaper

The agent told her to not do it again, Cole said, but did not explain why.

Lieutenant-Governor Carroll, a former Navy officer who is also a mother-of-three, said the allegations are all lies.

‘That’s totally false and absurd,’ said Carroll, a former Republican legislator who was chosen by Scott as his running mate in 2010.

Carroll said the allegations are an attempt by Cole and her attorney to get the criminal charges against Cole dropped. The former aide was charged with a third-degree felony and could serve up to five years in prison.

Carroll said: ‘They are trying to pull at straws. All this stuff you mentioned doesn’t excuse what happened.’

Ramos, whose title is special assistant to the lieutenant governor, did not return a phone call to her office.

Stephen Webster, the Tallahassee attorney representing 48-year-old Cole, stood by the allegations included in the filing. He said: ‘That’s the truth. It is what it is.’

Webster said his client is a grandmother and minister who had never been in previous legal trouble.

He said the filing was made to show that Carroll, Ramos and Carroll’s chief-of-staff, John Konkus, have reasons to make Cole look bad because they could be witnesses at Cole’s trial.

The attorney works for the law firm of Steven Andrews, who has clashed with Governor Scott in the past.

He filed a lawsuit during the 2010 campaign attempting to obtain a video deposition Scott had given in a case against a chain of health clinics he helped start. 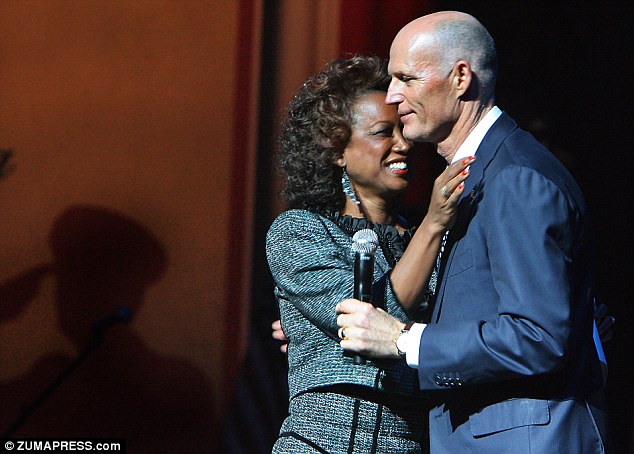 The Florida Department of Law Enforcement (FDLE) investigation that resulted in Cole’s arrest began last September after the agency received a complaint that a secret audio recording had been made in Carroll’s office.

The agency reported its findings to prosecutor Willie Meggs, the state attorney for the Tallahassee area.

It is against Florida law to record someone without consent, but there have been legal questions about recordings made in public buildings.

The Florida Times-Union newspaper obtained a copy of the conversation between Konkus, Carroll’s chief-of-staff, and Cole, a senior program analyst who also acted as a spokeswoman for Carroll.

The Times-Union placed the recording on its website. Konkus can be heard saying that the governor’s then- chief of staff, Steve MacNamara, is afraid of Lieutenant-Governor Carroll.

Konkus also complained that Scott ‘is not leading’.

The woman is facing a third-degree felony charge. Her allegations should be considered in that light.

Later in her court filing, Cole stated that she went to Carroll’s office door, which was closed. She said she walked in and found Carroll and Ramos ‘in what can only be described as a compromising position’. Carroll denied this ever happened.

Cole was fired about the time the investigation began after publicly speaking out about infighting in Carroll’s office.

A sworn statement by an FDLE agent said that investigators looked into Cole’s emails and cellphone records and discovered that she had sent the recording to the Times-Union reporter.

Konkus, who said the recording was made without his permission, told investigators it was made sometime between June and August 2011. He said he was working with Cole on Carroll’s website.

But Cole’s attorney maintained in his filing with the court that recording went on all the time in the lieutenant governor’s office and that Scott’s communications teams instructed staff members to ‘covertly’ record conversations in the office, especially with members of the press for accuracy.

They also maintain that Konkus joked about having a ‘smart pen’ that could record conversations without anyone knowing about it.

When reached by email, Konkus said he could not comment on the case and directed questions to Scott’s press office. Brian Burgess, a spokesman for Governor Scott, called the allegations about widespread taping and the rest of Cole’s assertions ‘outrageous’.

‘The woman is facing a third-degree felony charge,’ Burgess said. ‘Her allegations should be considered in that light.’

Attorney Stephen Webster made the court filing after Meggs’ office filed a motion to keep confidential two documents that the defense wanted to use –  a one-page report summarizing a polygraph test given to Cole where she talked about Carroll and Ramos and an FDLE report regarding the trash can fire in Carroll’s office.

The prosecutor on the case would not comment about the motion.

The official filing stated that the documents should be kept confidential in order to protect a ‘compelling government interest’ and to avoid harming third parties.

The state’s motion also contended the documents were irrelevant but could pose a threat to Cole receiving a fair trial because they would generate media interest.

A judge held a hearing last Friday where he ruled that the polygraph report would be kept confidential but the FDLE report would remain public.

That report details a March 17 incident where Ramos threw a cigar into Cole’s trashcan. The cigar started a fire that was put out by another employee.

Ramos told an FDLE investigator that she had taken a couple of puffs on the cigar at a St Patrick’s Day party, put it out and wrapped it up in a paper towel and returned with it to her office at the Florida Capitol. She then put it in Cole’s trashcan.

The FDLE investigator concluded it was an accident, but Cole’s attorney questioned the account, noting that both a cigar and a match were found in the trash can after the fire.

Husband's last words to his wife after not being able to speak for months: "Grace, I love you, I love you"