OPINION
By ELMORE LEONARD
Published: February 22, 2013
BLOOMFIELD VILLAGE, Mich. – WHEN I was a boy, around the time Pope Pius XI died, in 1939, I remember my dad saying he could be the next pope if he got the votes. He said there were no rules saying the pope had to come out of the cardinal pool, or be a bishop or priest of some kind; he only had to be a Catholic — male, of course — of good standing in the church, to be elected.

My mother, Flora, normally a kind soul, would tell Elmore Sr., “Shush, you could never in the world be the pope.” It was the only subject I remember them arguing about.

I grew up Catholic, went to Mass every day in grade school and high school; was taught by the Jesuits; spent two and a half years in the Navy during the war; returned, and was graduated from another Jesuit school, the University of Detroit. I even taught catechism in the ’60s, although I just told stories for the most part.

My dad might have been qualified to be pope. He worked for General Motors.

I’ve wondered what papal-type name my dad would have chosen. No doubt it would be one with a zip in the sound of it. My dad was a dude, and I could not see him wearing a miter, that high, pointed hat that’s so popular with bishops, or carrying the gold crosier that indicates he’s the shepherd of his flock, over one billion Catholics.

My dad would have introduced change, brought the church up to date and the clergy out of their traditional raiment, and done away with the smoke signals that indicate whether the cardinals have selected the next pope or are still working on it. Why not pick up the phone and tell us where they stand? 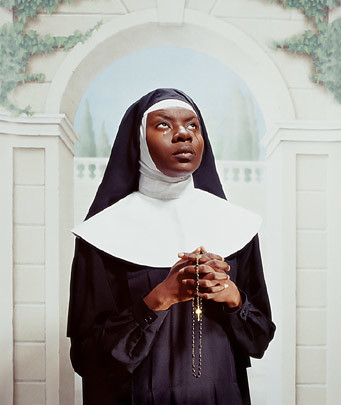 My dad’s brother Urban might have been named for a pope. My only hope is that it wasn’t Urban VI, the last pope to be chosen from outside the College of Cardinals. Urban came along in 1378. He was so unpleasant that French cardinals split off and elected their own rival pope, who excommunicated him. The 14th century must have been a wild time in papal history.

My dad was technically right: the man selected as the next pope need not be a member of the clergy, though he would have to be ordained a priest and the bishop of Rome upon election. The church needs, I believe, someone like John XXIII, whose example of humility opened the door to a fresh way of thinking.

The Vatican is an old boys’ club. Tradition going all the way back to Peter says it’s a man’s job. But wouldn’t a woman, one who isn’t the least bit timid, be interesting in the role? Like a cool black nun who comes to the throne after 30 years doing God’s work with little recognition. She’d be the first pope in heels. Maybe from the Franciscan Handmaids of the Most Pure Heart of Mary, in Harlem — the real Sister Act. Get a singing, swinging sister to jazz up St. Peter’s Basilica. I guarantee people would tune in.

In my novel “City Primeval,” a female lawyer has framed on her wall a quotation from Charlotte Whitton, who twice was the mayor of Ottawa, in the 1950s and ’60s, that states:

“Whatever women do, they must do twice as well as men to be thought half as good. Luckily, this is not difficult.”

Nuns who are friends of mine know this.

POPE BENEDICT XVI resigned because he lacked the strength to continue at his age, 85. I’m a couple of years older, and still banging out novels because I love doing it. Doesn’t Benedict still love being the pope?

What will become of him once he’s free to be himself?

We are told he plans to take it easy for a while at Castel Gandolfo, his summer retreat, and then settle into a four-story convent in Vatican City, previously occupied by cloistered nuns. Maybe get around the ban on pets in the Vatican. Benedict is well-known as a cat lover. Whether he would have to change the litter box is not known.

We don’t know if Benedict plans to advise the new pope on how to maintain his authority, so that factions loyal to each man don’t start duking it out. People get nervous when you have more than one pope.

When Celestine V resigned, some 700 years ago, his successor, Boniface VIII, had him imprisoned as he was about to leave for Greece. Celestine died in captivity in 1296, at the age of 81, but was declared a saint in 1313. So maybe stepping down was worth it.

I doubt Benedict is thinking about canonization, like the pope he followed, John Paul II, who is called “blessed,” which in the Roman Catholic Church is the first step toward sainthood. He’s probably not thinking about anything but retirement, a chance to pray all day and read the paper.

But people are asking: What if he gets his second wind?

I think my dad would wonder. I can hear him — presumed now to be in heaven — say to my mother, as he hands her a bourbon on the rocks with a twist, my mother never having had more than one:

“You see, we’re gonna have two popes at the same time — both infallible — and you don’t think there’s gonna be trouble?”

You know how she answers.