Remnants of ceramic animals found in Croatia prove that man mastered pottery long before historians imagined – before people even settled down and became farmers.

But our ancestors didn’t use the technique to make pots – instead, we created ceramic animals using clays baked in ovens.

The finds – along with other recent discoveries in China – have forced scientists to rethink the history of pottery. It’s now thought that the use of ceramics was invented – and forgotten – several times during history by different societies. 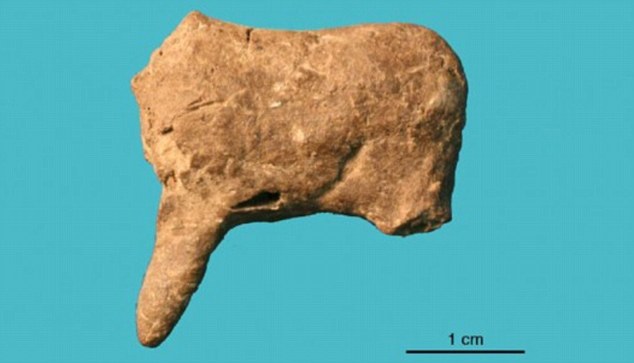 But is it art? One of 36 fragments of carved clay animals found in Croatia

MYSTERY OF WHEN – AND WHY – MAN INVENTED POTTERY DEEPENS

Pottery fragments found in a south China cave have been confirmed to be 20,000 years old, making them the oldest known pottery in the world, according to archaeologists.

The fragments were believed to belong to a community of roving hunter-gatherers some 20,000 years ago and apparent scorch marks indicate they may have been used in cooking.

The discovery of several ancient pots has thrown into question what drove man to invent ceramics. Previously, it had been thought the technology grew up as man settled into farming communities.

Previously, it had been thought that pottery was invented during the later neolithic period, when people used clay pots for domestic purposes.

The new find is evidence of a community of prehistoric artists and craftspeople who ‘invented’ ceramics during the last Ice Age – thousands of years before pottery became commonplace – has been found in modern-day Croatia.

‘It is extremely unusual to find ceramic art this early in prehistory,’ Dr. Preston Miracle, from the University of Cambridge, said.

‘The finds at Vela Spila seem to represent the first evidence of Palaeolithic ceramic art at the end of the last Ice Age. They appear to have been developed independently of anything that had come before.

‘We are starting to see that several distinct Palaeolithic societies made art from ceramic materials long before the Neolithic era, when ceramics became more common and were usually used for more functional purposes.’

The finds consist of 36 fragments, most of them apparently the broken-off remnants of modelled animals. 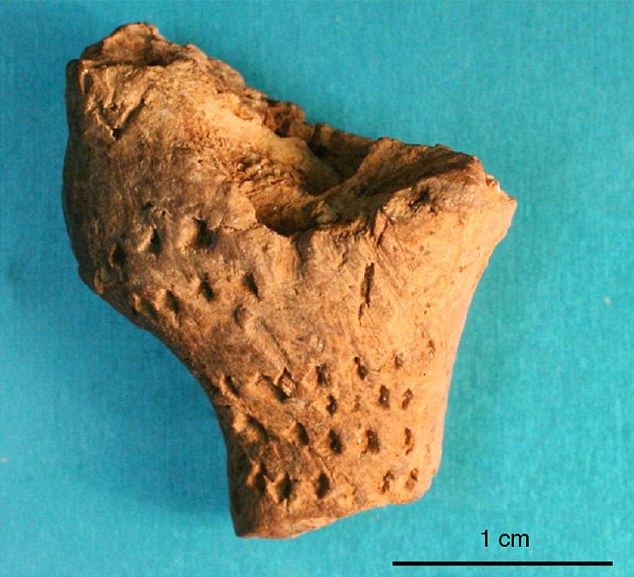 Animal carving: One of the fragments uncovered in Croatia, thought to date to 17500 years ago

They were found at a site called Vela Spila on the Adriatic coast.

Archaeologists believe that they were the products of an artistic culture which sprang up in the region about 17,500 years ago.

Their ceramic art flourished for about 2,500 years, but then disappeared.

The study, which is published in the journal PLoS ONE, adds to a rapidly-changing set of views about when humans first developed the ability to make ceramics and pottery.

Most histories of the technology begin with the more settled cultures of the Neolithic era, which began about 10,000 years ago. 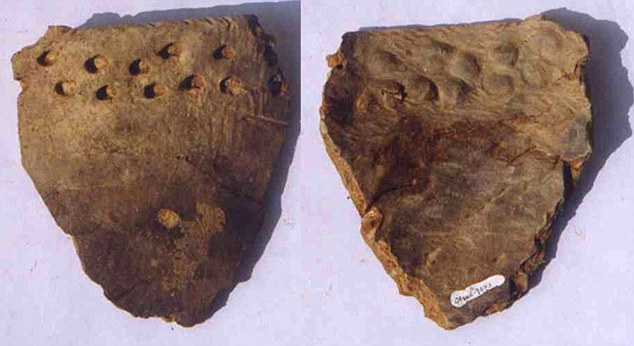 Pottery fragment from Xianrendong Cave in northern Jiangxi Province, China. Bits of the oldest known pottery, some 2,000 years older than previously found pieces, have been uncovered in China

The fragments were believed to belong to a community of roving hunter-gatherers some 20,000 years ago and apparent scorch marks indicate they may have been used in cooking

Now it is becoming clear that the story was much more complex. Over thousands of years, ceramics were invented, lost, reinvented and lost again.

The earliest producers did not make crockery, but seem to have had more artistic inclinations.

The Vela Spila finds have been the subject of intensive investigation by researchers at the University of Cambridge and colleagues in Croatia since 2010.

Their report, published this week, suggests that although earlier ceramic remnants have been found elsewhere, they had no connection with the site, where the ability to make these artefacts appears to have been independently rediscovered by the people who lived there.

Vela Spila is a large, limestone cave on Korčula Island, in the central Dalmatian archipelago. Excavations have taken place there sporadically since 1951, and there is evidence of occupation on the site during the Upper Palaeolithic period, roughly 20,000 years ago, through to the Bronze Age about 3,000 years ago.

The first ceramic finds were made back in 2001. Initially they were almost overlooked, because it is so unusual to find ceramic in the Upper Palaeolithic record.

As more ceramic emerged, however, examples were set aside for careful analysis. Researchers meticulously checked the collection for tell-tale evidence of modelling on the artefacts which would confirm that they had been made by a human hand. In all, 36 cases were identified.

Broadly, the collection belongs to a material culture known as ‘Epigravettian’ which spanned 12,000 years, but radiocarbon dating has allowed scholars to pin down the Vela Spila ceramic collection to a much narrower period, between 17,500 and 15,000 years ago. Those which can be identified appear to be fragments of modelled animals.

The ceramics were clearly made with care and attention by real craftspeople who knew what they were doing. One of the better-preserved items, which seems to be the torso and foreleg of a horse or deer, shows that the creator deliberately minimised the number of joins in the model, perhaps to give it structural strength.

They were also marked with incisions, grooves, and punctured holes, using various tools, probably made from bone or stone. Finger marks can still be seen where the objects were handled while the ceramic paste was wet.

As well as being the first and only evidence of ceramic, figurative art in south-eastern Europe during the Upper Palaeolithic, the collection’s size, range and complexity suggests that Vela Spila was the heart of a flourishing and distinctive artistic tradition.

Although the finds bear some similarities with ceramics discovered in the Czech Republic, which date back a further 10,000 years, there are enough structural and stylistic differences – as well as separation by a huge gulf in time – to suggest no continuity between the two.

The older, Czech finds were also typically found near hearths, which were possibly kilns. Some researchers have even gone so far as to suggest that they were deliberately destroyed in the fire as some sort of ritual act. The Vela Spila finds, on the other hand, appear to have undergone no such ritual destruction – at least not in the same way.

As a result, the Cambridge-Croatian team believes that these ceramics came from a hitherto unknown artistic tradition that flourished for about two millennia in the Balkans.

Like their Neolithic descendants, these people may have had no knowledge of ceramics before they invented the technology for themselves.

And like their Palaeolithic ancestors, over time they either forgot or rejected that technology – only for it to be rediscovered again. The next evidence of ceramic technologies at Vela Spila appears 8,000 years later in the record, and comprises functional pottery items rather than art.

‘The development of this new material and technology may have been a catalyst for a more general transformation in artistic expression and figurative art at this site thousands of years ago,’ Dr Rebecca Farbstein, from the McDonald Institute for Archaeological Research, University of Cambridge added.

‘Although we often focus on utilitarian innovations as examples of societies transforming as a result of new technology, the ceramic evidence we have found here offers a glimpse into the ways in which prehistoric cultures were also sometimes defined and affected by artistic innovations and expression.’

‘Rise and Fall of Apartheid’ at Center of Photography