Two plastic rings, a rubber band, and a thread.
PrePex, the new nonsurgical circumcision tool experts believe could revolutionize the prevention of H.I.V. and AIDS in sub-Saharan Africa, is easier to assemble than a toy you might find in a Happy Meal.
Recent studies in Rwanda indicate that the device, which induces necrosis of the foreskin by blocking its blood flow, can be used to cheaply, quickly and safely circumcise adult men in resource-limited settings — places where surgeons are scarce and where, five years after circumcision’s protective efficacy was first proved, millions of men are still in need of the procedure.
On a recent afternoon at Rwanda’s Kanombe Military Hospital, a complex of low brick buildings off a dirt road in a hilly suburb of the capital, Kigali, two nurses curtained off an examination table for a demonstration of the PrePex application process. “It’s very fast, very easy,” said one of the nurses. “I can make it in about two-and-a-half minutes.”
Across the way, half a dozen young men waited their turn in an airy, bare-walled space, while a doctor in crisp camouflage fatigues and black combat boots told them what to expect. “Most of them are not educated, so you have to explain to them the phenomenon of ischemia,” said Lt. Col. Jean Paul Bitega, the surgeon heading up Rwanda’s rollout of the device and principal investigator for the safety and efficacy study that helped Rwanda become the first and only country to secure W.H.O. approval to use it.
Since 2007, health authorities have known that circumcising adult men reduces their risk of acquiring H.I.V. through heterosexual intercourse by 60 percent or more. That landmark finding, firmly established by dozens of observational studies and three randomized controlled trials in South Africa, Uganda and Kenya, has made male circumcision the most promising method of prevention in the anti-AIDS arsenal. According to some estimates, increased circumcision coverage could prevent as many as 2 million new infections over 10 years, and save billions in treatment costs averted. 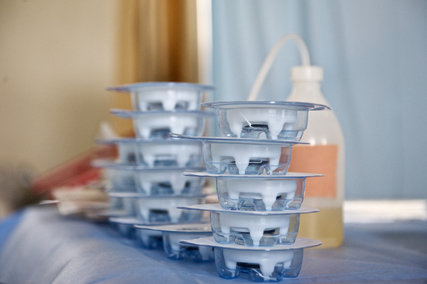 Mark Darrough Stacks of packaged PrePex devices at Kanombe Military Hospital on the outskirts of Kigali, Rwanda, where the first clinical studies of the device were conducted in 2010.

“It’s my No. 1 priority in Africa,” Dr. Stefano Bertozzi, the director of H.I.V. and tuberculosis  for the Bill and Melinda Gates Foundation, told The Times in late 2011. “It’s clearly the most obvious, most cost-effective intervention we could use to dramatically change the course of H.I.V. in the near future.”
And yet, for all of its obviousness, male circumcision remains a staggeringly under-utilized tool. As of late 2011, a mere 1.3 million medical male circumcisions had been performed in sub-Saharan Africa. While that’s almost double the number for the previous year, it’s well short of the target set by the World Health Organization and the Joint United Nations Program on H.I.V./AIDS (UNAIDS): 20 million men, ages 15 to  49, by 2015.
PrePex, which is approved by the Food and Drug Administration and is pending approval by the World Health Organization, has the potential to close that gap. Bloodless and virtually painless, it consists of four easy-to-manufacture parts, requires no sutures or injections of anesthesia, and can be administered in non-sterile settings by teams of minimally trained nurses. Five times faster than surgery, and significantly safer, it’s also faster and less painful than its current competitors, all of which require an injection.
“Right away, we could see it was spectacular,” said Dr. Agnes Binagwaho, minister of health for Rwanda, which spearheaded the first safety studies of PrePex in 2010 in an effort to ramp up the rollout of a new national voluntary medical male circumcision campaign. “We asked people to stay in the hospital for observation after their device was removed, and the effect was obvious. The people who had PrePex didn’t get pain — they were up playing cards and talking — and the ones who had surgery were still in bed.”
If male circumcision is a “surgical vaccine” as some have called it, PrePex may be its jet injector. That device, an air-powered, pistol-shaped instrument invented in 1960, made possible mass inoculation on a far larger scale than ever before and proved vital to the eradication of smallpox, then the planet’s deadliest pathogen. PrePex could play a similar role in curbing the spread of AIDS. But questions linger about the potential for what public health scholars call the Achilles’ heel of H.I.V. prevention: a phenomenon known as “risk compensation,” whereby a decrease in perceived risk results in an increase in risk-taking behavior.
If circumcised men perceive themselves to be fully protected against H.I.V., will they wear condoms less frequently or engage in more transactional sex? And if they do, what might that mean for their female partners? The answer to both of those questions is, no one really knows. And it shows just how complex a social problem AIDS remains more than three decades after the Centers for Disease Control and Prevention first officially defined it as a disease.

So far, said Dr. Nelli Westercamp, an epidemiologist at the University of Illinois,  Chicago, and an expert on male circumcision, “we don’t have a good answer to the question of whether risk compensation is happening.”
Two cross-sectional studies conducted in the 1990s suggested that circumcised men do engage in riskier sexual behavior than uncircumcised men. And in two of the three randomized controlled trials that proved circumcision’s protective efficacy, recently circumcised men reported either more sexual contacts or more unprotected sex than their uncircumcised counterparts. But the third trial, in Uganda, found no evidence of behavioral risk compensation, and the same was true of a follow-up study of the same population conducted three years later.
Westercamp warned, however, that the intensive health education that was a feature of the clinical trials — part of the “standard of care” to which all participants are entitled — might have mitigated risky behavior, causing the studies to underestimate its occurrence in the real world, where H.I.V. prevention messages often fail to reach their target audience.
Indeed, as of last year, a mere 26 percent of women and 33 percent of men between the ages of 15 and 24 in sub-Saharan Africa had comprehensive correct knowledge about H.I.V. prevention, according to figures from U.S.A.I.D. And millions of people throughout the region remain unaware of their H.I.V.-positive status.
What we do know is that while male circumcision is a great way to prevent the transmission of H.I.V. from women to men, there is no evidence that it works the other way. And while in the long run, fewer infections over all will benefit both male and female populations, male circumcision may actually make women more vulnerable to infection, not less, in the time it takes for H.I.V. prevalence among males to go down. One study in South Africarevealed that even moderate levels of risk compensation in men could result in elevated risk for women, especially in the short term. And another in Rwanda, a country with relatively low H.I.V. incidence, found that risk compensation could actually make the epidemic worse, as H.I.V.-positive circumcised men could cause an increase in H.I.V. prevalence among women, which would in turn raise the risk of infection for men.
That’s not to say circumcision shouldn’t be a top priority in the fight against H.I.V. /AIDS in Africa; every intervention has its trade-offs, and male circumcision is no exception. But it underscores the same lesson Bill Gates learned two years ago on a visit to northern Nigeria, where a rumor that polio vaccines sterilize Muslim girls had moved leaders to halt vaccinations, leading to an outbreak that later spread across the continent. Gates had given $700 million to eradicate the disease, and the goal had seemed well within reach. But that a rumor could reverse years of progress and throw the global effort into disarray convinced the computer whiz-cum-philanthropist that technology alone wasn’t enough. “Science can simplify the job,” Gates told the Wall Street Journal, reflecting on that experience. “But the human piece is the ultimate test.”
Indeed, for all of public health’s wondrous tools, the message still matters. And when it comes to male circumcision, getting that message right may be no small challenge.
“It is difficult to imagine a convincing public health message that effectively influences men to undergo circumcision and continue to consistently use condoms,” said Dr. Seth Kalichman, a social psychologist at the University of Connecticut, who researches H.I.V./AIDS prevention and care. “What does 50 percent protection mean? That I have to use condoms half as often? That I can decide not to use condoms at all and worry half as much?”
Bitega of Rwanda’s Kanombe Military Hospital said that some men want circumcision for better hygiene, others because they believe women prefer it. “And now people are aware it’s for H.I.V. They know that it reduces their risk. But the percentage, they don’t know,” he said, watching as a patient hopped off the table, zipped up his trousers, and trotted off, apparently in a hurry to get back to whatever he’d been doing before. “And maybe it’s better not to give them the percentage. If he hears more than 50, then maybe he feels too safe.”