By PAUL SCOTT
PUBLISHED: 19:20 EST, 12 April 2013 | UPDATED: 19:24 EST, 12 April 2013
Bumping along a red dirt road in one of the world’s poorest countries last week, a cavalcade of six luxury four-by-fours eventually came to a halt outside a ramshackle school.
It was an entrance you would expect of a visiting head of state. But, instead, the bird-like figure of Madonna emerged from the back of the lead car, hair scraped back and hands still moist from the anti-bacterial gel she had applied seconds earlier.
Moments later, she was posing for photographers in the centre of a group of beaming children at the Mkoko primary school in rural Malawi, her image as billionaire pop diva swapped for that of Lady Bountiful and international humanitarian.
But if the singer thought her four-day trip to the African state would highlight the school-building programme she helps fund — plus offer some worthwhile personal PR — she was sorely mistaken. 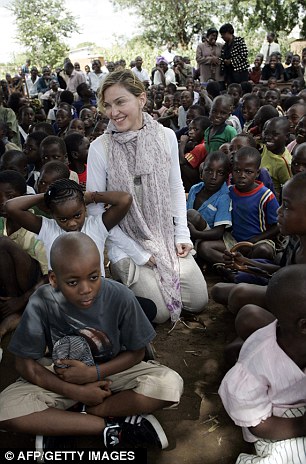 Saint to sinner? Madonna, pictured kneeling among Malawi’s orphans, has come in for criticism from the country’s President

Instead, as a result of her so-called ‘goodwill mission’ to the poverty-stricken country, the Material Girl finds herself at the centre of an ongoing diplomatic incident that threatens to tarnish her image as St Madonna of Malawi.
She has been accused by the nation’s female president of exploiting her aid work for personal publicity, overplaying her charity’s achievements and of reneging on her promise to build a £10 million state-of-the-art academy for poor schoolgirls.
In an unprecedented attack, President Joyce Banda also accused the singer — who adopted two of her four children from Malawi — of ‘making the poor dance for her’.
In a final slight, the star and her entourage were made to queue with economy passengers before flying out of the capital Lilongwe this week.

A statement issued by President Banda’s office claimed Madonna had bullied state officials and demanded VIP treatment.
It read: ‘If […] because she is an internationally-renowned star, Madonna believes she deserves to be treated differently from other visiting foreigners, it is worth making her aware that Malawi has hosted many international stars, including Chuck Norris, Bono, David James, Rio Ferdinand and Gary Neville, who have never demanded state attention or decorum despite their equally dazzling stature.’ 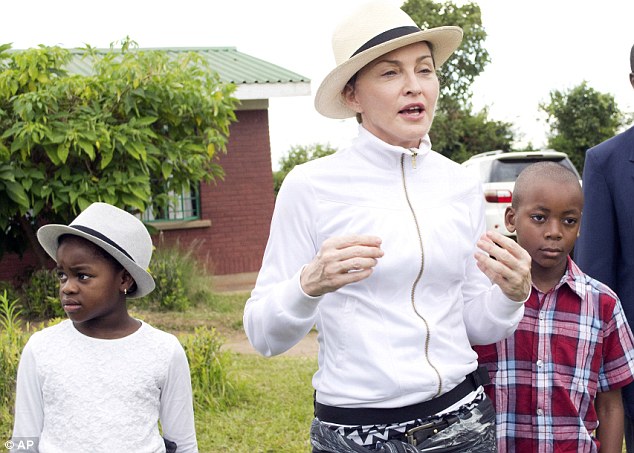 More than meets the eye: Madonna, with her adopted two children David Banda, right and Mercy James, left, has been accused of ‘patronising arrogance’

President Banda has since said that she did not approve the statement, but has offered no apology.
Relations have been further soured by a scrawled, and mis-spelled letter 54-year-old Madonna wrote to Mrs Banda, belatedly requesting an audience.
To make matters worse, the note was sent days after the star’s people had hinted that Madonna might not be able to grace the country’s leader with her time.
And if that were not enough, Madonna’s charity chief, Trevor Neilson, has caused outrage by accusing Malawi government officials of corruption on Twitter. Meanwhile, the country’s education minister has poured scorn on claims that Madonna’s charity, Raising Malawi, has built ten new schools for 4,800 children.
‘The schools were already in existence,’ says Eunice Kazembe. ‘It is classrooms that Madonna has donated. They have built ten classroom blocks. It is helpful, but it is a long shot to call it significant.’
Madonna’s spokesman says that without her involvement, children at the schools would be taught ‘under trees’ and denies that the star requested VIP treatment.

Not impressed: Joyce Banda, President of Malawi, has spoken out against the demands and attitude of Madonna

Given that Malawi relies almost totally on aid and Madonna was once said to be its biggest individual benefactor, it is remarkable that the country has turned on her with such vehemence.
But behind this bitter PR war are accusations of wasted millions, an obsession with self-publicity and a grudge over the singer sacking President Banda’s sister as the head of her African charity.
There are also claims that, despite insistence that her two Malawian children, David, seven, and Mercy, eight — whom she adopted in 2006 and 2009 respectively — would remain in touch with their roots, they have been kept away from family members in the country.
David and Mercy took centre stage last week as Madonna and her natural children Lourdes, 16, and Rocco, 12, toured the schools she helped fund.
Yet Mercy’s uncle, Peter Baneti, says he was not told of the trip or given a chance to see his niece.
He was left shuttling between the department of social welfare and the Kondanani Children’s Village orphanage, where Mercy was placed as a baby, trying in vain to find her.
‘I was not told they were coming and I have spent every day trying without success to see Mercy again,’ he complained. 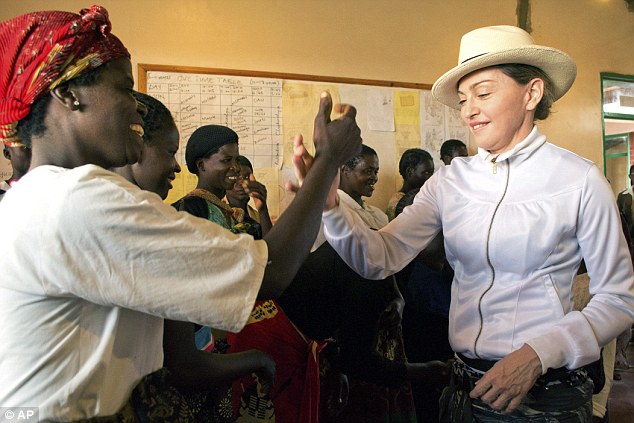 Mood swing: Madonna appears in good spirits as she greets Malawian locals here – but she has been accused of behaving inappropriately by senior officials

Likewise, since Madonna adopted David, there have been angry claims that the boy’s Malawian relatives have been edited out of his life.
David was placed in the Home of Hope orphanage, in the western district of Mchinji, after his mother died following his birth in 2005.
His father, Yohane Banda, 39, no relation to the country’s president, was supportive of the adoption.

But now he says he believed his son would be returned home to him after being educated in America.
In a rare meeting in 2009, David apparently did not recognise his father. More recently, Mr Banda has been talking about being ‘cheated’ out of seeing his son grow up. Certainly,he was nowhere to be seen during last week’s trip as David posed for a series of photos, including kissing babies at the orphanage where he once lived.
However, there was talk of Madonna allowing David to meet his biological father last Friday, a day before she and her entourage flew back to America on a private Gulfstream jet. It is not known if the meeting took place.
Part of the anger within Malawi is centred around the fact that senior members of the government believe the Material Girl reneged on a deal that allowed her to adopt the two children in first place. 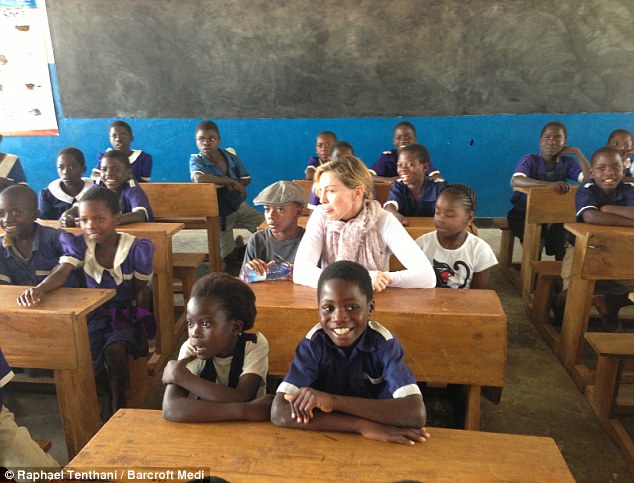 Bit of a difference: Madonna has claimed she ‘built’ a number of schools, whereas officials state that she actually constructed a number of ‘classrooms’

They waived strict rules that state non-Malawians have to be resident in the country for at least 18 months before adopting.
But a blind eye was turned because of the star’s promise to build the 400-bed Academy for Girls through her Raising Malawi charity, backed by the Kabbalah Centre in Los Angeles.
The allegation is that after promising the £10 million project, Madonna is now doing her charity work on the cheap.
Raising Malawi and Success For Kids, did not actually build any of the schools she visited. That job was done by American charity BuildOn, which has been erecting two-room schools in the state for 20 years. In fact, Madonna closed the offices of both her charities in Lilongwe in 2011.
According to the Global Philanthropy Group, which oversees her charity work, the singer has donated $400,000 (£260,000) to BuildOn.
Given that the charity’s annual income is in the region of $9 million (£5.8 million), Madonna is a fairly minor contributor.
Significantly, the woman she appointed to run Raising Malawi, Anjimile Mtila-Oponyo, is the sister of President Banda.
In 2011, Madonna sacked Mrs Oponyo and seven of the charity’s executive committee after discovering a black hole in its accounts.
It was claimed that Oponyo and her staff frittered away £2.4 million on cars and golf membership before a brick had even been laid. However, staff insist the perks were written into their contracts.
None of which is much of a return on the £7 million Madonna has personally pumped into Malawi since her first visit in 2006.
Whatever the truth, the Material Girl’s reputation as the self-styled saviour of Africa has taken something of a dent.
Read more: http://www.dailymail.co.uk/news/article-2308382/Madonna-mutiny-Malawi-When-adopted-children-posed-saviour-So-President-accused-patronising-arrogance.html#ixzz2QIsjzUHm