DNA sequencing has revealed a previously unknown human population boom between 40,000 and 50,000 years ago, a new study claims.

The sequencing of the Y chromosomes from 36 men has revealed a ten-fold increase in the number of genetic markers nearly 20,000 years after our ancestors first left Africa.

Scientists believe the expansion could have occurred as our ancestors adapted to more rugged environments, allowing them to spread inland from coastal areas. 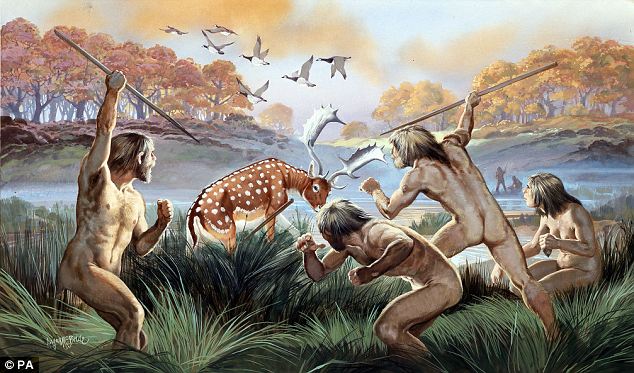 Baby boom: New analysis of DNA has revealed a previously unknown human population explosion between 40,000 and 50,000 years ago

‘We have always considered the expansion of humans out of Africa as being the largest population expansion of modern humans, but our research questions this theory,’ said Wei Wei of the West China University of Medical Sciences.

‘The out-of-Africa expansion, which happened approximately 60,000 years ago, was extremely large in geographical terms with humans spreading around the globe.

‘Now we’ve found a second wave of expansion that is much larger in terms of human population growth and occurred over a very short period, somewhere between 40,000 to 50,000 years ago.’

The newly discovered population boom occurred between the first expansion of modern humans out of Africa and the Neolithic expansions which began 10,000 years ago with the advent of farming.

There is no obvious archaeological event that would explain why this sudden expansion in the human population occurred, the researchers reported.

Neanderthals learned how to make jewellery and sophisticated tools from the ancestors of modern humans, a study published today suggests.

New high precision radiocarbon dating shows that a cultural exchange may have taken place between modern humans and Neanderthals in France and Spain more than 40,000 years ago.

The findings have important implications for our understanding of our long-extinct sister species.

If Neanderthals made the ornaments, they must have been capable of symbolic behaviour thought to be unique to man.

One possible theory they have advanced is that during the original out-of-Africa expansion, humans moved along the coastlines of the world, settling as they went.

Their origins and genetic makeup would mean that these people were suited to coastal life, but not to the demands of living inland. This would have prevented large population growth as the coasts could only sustain a certain number of people.

‘We think this second, previously unknown population boom, may have occurred as humans adapted to their new environment after the first out-of-Africa expansion,’ said Dr Qasim Ayub, from the Wellcome Trust Sanger Institute.

‘We think that when humans moved from the horn of Africa to Asia, Australia and eventually Europe, they remained in small groups by the coasts.

‘It took them tens of thousands of years to adapt to the mountainous, forested surroundings on the inner continents.

‘However, once their genetic makeup was suited to these new environments, the population increased extremely rapidly as the groups travelled inland and took advantage of the abundance of space and food.’

The work highlights how it is now possible to obtain new biological insights from existing DNA sequencing data sets, and the value of sharing data.

The majority of the DNA information used for this study was obtained from freely-available online data-sets and the researchers claim it is the first time anyone has used information from large-scale DNA sequencing to create an accurate family tree of the Y chromosome, from which the inferences about human population history could be made. 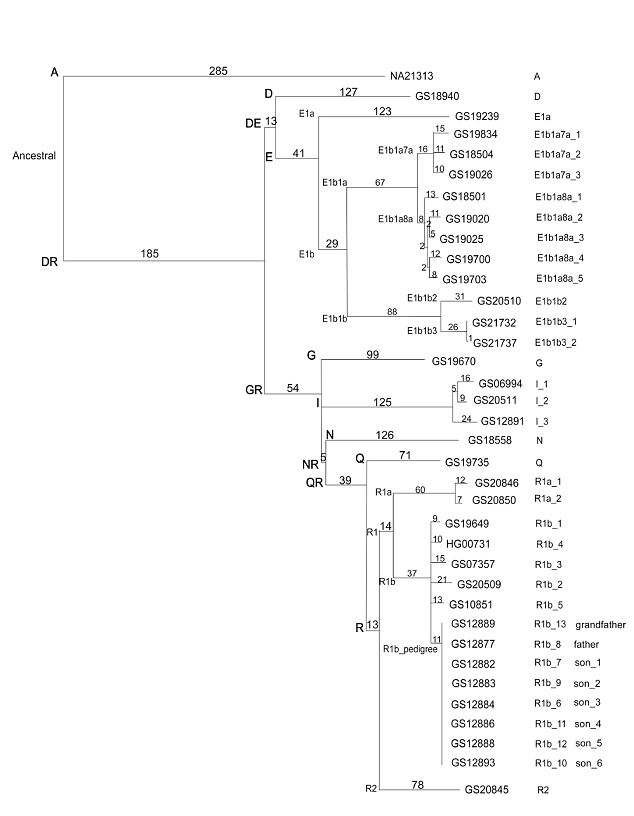 A rooted genetic family tree of 36 Y chromosomes: The lengths between the branches and the length of each branch on the Y chromosome family tree provide insights into the evolution of the human population

Since the Y chromosome is found only in men, its history and evolution are easy to study and interpret.

This study also highlights how information generated by other genetic studies, in this case by the company Complete Genomics, can be used to investigate human genetic archaeology.

The lengths between the branches and the length of each branch on the Y chromosome family tree provide insights into the evolution of the human population.

The closer the branches are, the more rapidly the population was expanding and separating, most likely into different geographic areas. The longer the branch length, the greater the time that group of people have been separated from the other groups.

‘We now want to look at ten times this number of Y chromosomes in data from the 1000 Genomes Project. Who knows what we will find then?’

The findings have been published in the journal Genome Research.

Why Did Ancient Europeans Just Disappear 14,500 Years Ago?