The Collegiate Reformed Church, under the shadow of the Empire State building: Less than 50 per cent of Americans are Prostestant, according to Pew

For the first time in its history, the United States does not have a Protestant majority, according to a new study.

The rising numbers of Americans with no religious affiliation is on the rise, which led to the percentage of Protestant adults in the U.S. reaching a new low of 48 per cent.

This is the first time that Pew Forum on Religion & Public Life has reported with certainty that the number has fallen below 50 per cent.

The drop has long been anticipated and comes at a time when there no Protestants are on the U.S. Supreme Court, and the Republicans have their first presidential ticket with no Protestant nominees.

Among the reasons for the change are the growth in nondenominational Christians who can no longer be categorised as Protestant, and a spike in the number of American adults who say they have no religion.

The Pew study, released Tuesday, found that about 20 per cent of Americans say they have no religious affiliation, an increase from 15 per cent in the last five years.

Scholars have long debated whether people who say they no longer belong to a religious group should be considered secular.

While the category as defined by Pew researchers includes atheists, it also encompasses majorities of people who say they believe in God, and a notable minority who pray daily or consider themselves ‘spiritual’ but not ‘religious’.

Still, Pew found overall that most of the unaffiliated aren’t actively seeking another religious home, indicating that their ties with organised religion are permanently broken.

Changing times: America’s religious make-up has changed greatly in the 400 years since the Pilgrims first arrived on the Mayflower 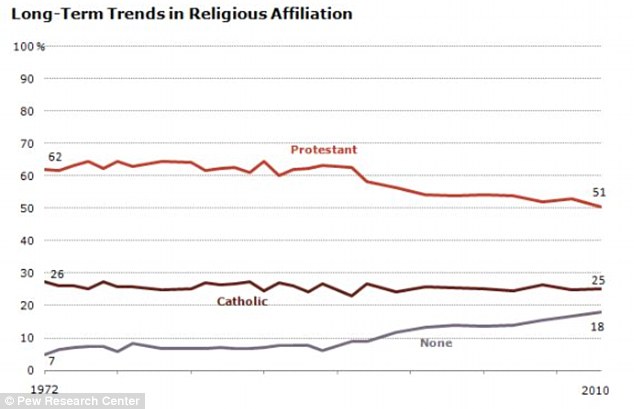 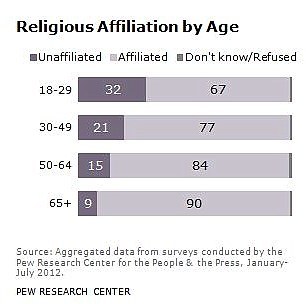 The research shows that religion is declining among the younger generation

Growth among those with no religion has been a major preoccupation of American faith leaders who worry that the United States, a highly religious country, would go the way of Western Europe, where church attendance has plummeted.

Pope Benedict XVI has partly dedicated his pontificate to combating secularism in the West. This week in Rome, he is convening a three-week synod, or assembly, of bishops from around the world aimed at bringing back Roman Catholics who have left the church.

The trend also has political implications.

American voters who describe themselves as having no religion vote overwhelmingly for Democrats.

Pew found Americans with no religion support abortion rights and gay marriage at a much higher-rate than the U.S. public at large.

These ‘nones’ are an increasing segment of voters who are registered as Democrats or lean toward the party, growing from 17 per cent to 24 per cent over the last five years.

The religiously unaffiliated are becoming as important a constituency to Democrats as evangelicals are to Republicans, Pew said. 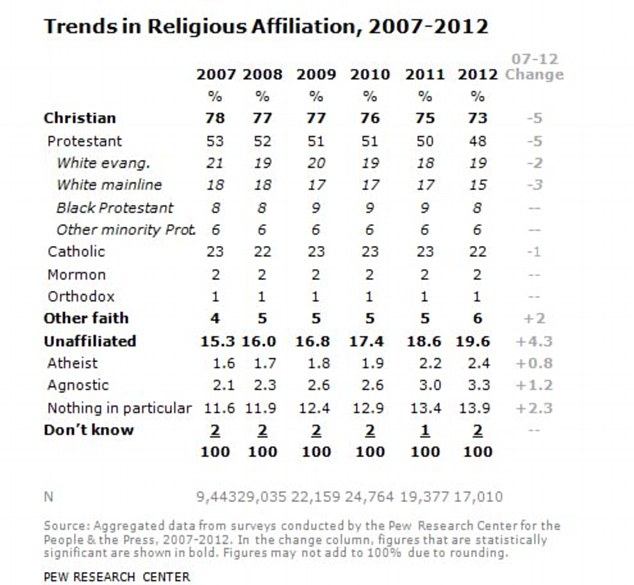 Five years of changing beliefs: Atheism and agnosticism is growing at the expense of Christianity 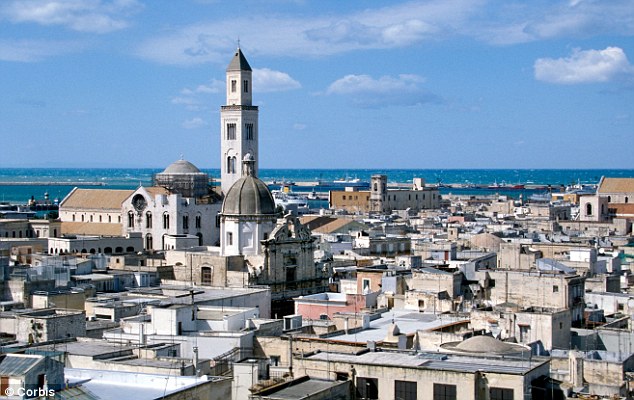 Cathedral Bari in Puglia, Italy: Church buildings are a staple of European life, but attendances are plummeting 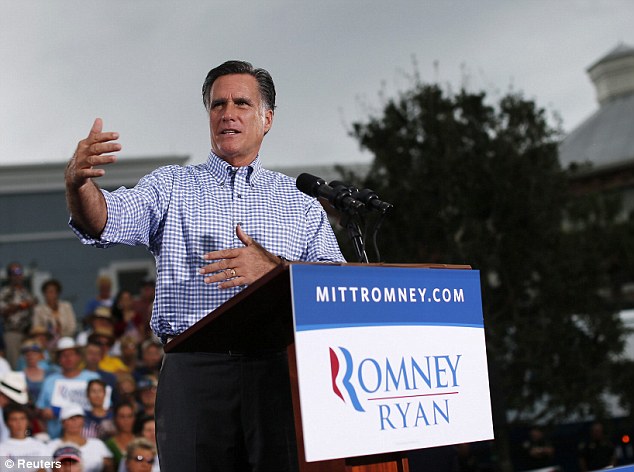 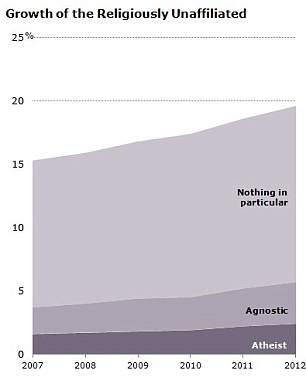 Neither agnostic or atheist: The rise of the ‘nothing in particular’

The Pew analysis, conducted with PBS’ ‘Religion & Ethics Newsweekly’, is based on several surveys, including a poll of nearly 3,000 adults conducted June 28-July 9, 2012.

The finding on the Protestant majority is based on responses from a larger group of more than 17,000 people and has a margin of error of plus or minus 0.9 percentage points, Pew researchers said.

Pew said it had also previously calculated a drop slightly below 50 percent among U.S. Protestants, but those findings had fallen within the margin of error.

The General Social Survey, which is conducted by the University of Chicago’s National Opinion Research Center, reported for 2010 that the percentage of U.S. Protestants was around 46.7 percent.

Researchers have been struggling for decades to find a definitive reason for the steady rise in those with no religion.’

The spread of secularism in Western Europe was often viewed as a byproduct of growing wealth in the region. Yet among industrialised nations, the United States stood out for its deep religiosity in the face of increasing wealth. 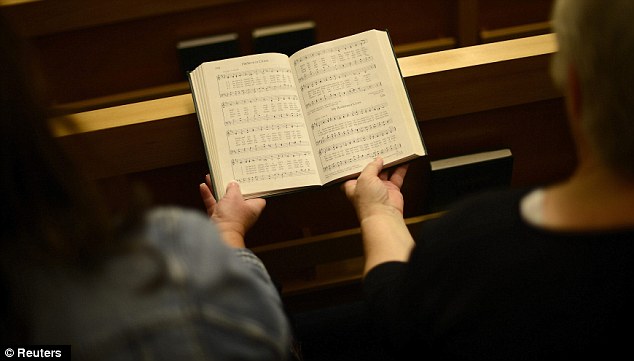 Mormons attend a service: America may see its first President hailing from this faith if Republican Mitt Romney wins the election

Now, religion scholars say the decreased religiosity in the United States could reflect a change in how Americans describe their religious lives. 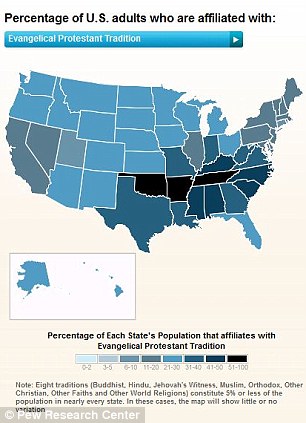 Arkansas, Oklahoma and Tennessee (in black) are the most Protestant states, according to the studies

In 2007, 60 percent of people who said they seldom or never attend religious services still identified themselves as part of a particular religious tradition. In 2012, that statistic fell to 50 percent, according to the Pew report.

‘Part of what’s going on here is that the stigma associated with not being part of any religious community has declined,’ said John Green, a specialist in religion and politics at the University of Akron, who advised Pew on the survey.

‘In some parts of the country, there is still a stigma. But overall, it’s not the way it used to be.’

The Pew study has found the growth in unaffiliated Americans spans a broad range of groups: men and women, college graduates and those without a college degree, people earning less than $30,000 annually and those earning $75,000 or more.

However, along ethnic lines, the largest jump in ‘nones’ has been among whites. One-fifth of whites describe themselves as having no religion.

More growth in ‘nones’ is expected. One-third of adults under age 30 have no religious affiliation, compared to nine  per cent of people 65 and older.

Pew researchers wrote that ‘young adults today are much more likely to be unaffiliated than previous generations were at a similar stage in their lives’, and aren’t expected to become more religiously active as they age.

What Is the Koran?

Africa’s Tallest Statue Of Jesus To Be Unveiled In Nigeria

Arius: Libyan Christian Priest of Alexandria, Egypt and the Council of Nicaea