Pruitt–Igoe was a large urban housing project first occupied in 1954 in the U.S. city of St. Louis, Missouri. Living conditions in Pruitt–Igoe began to decline soon after its completion in 1956.  By the late 1960s, the complex had become internationally infamous for its poverty,crime, and segregation. Its 33 buildings were torn down in the mid-1970s,  and the project has become an icon of urban renewal and public-policy planning failure.
The complex was designed by architect Minoru Yamasaki, who also designed the World Trade Center towers and the Lambert-St. Louis International Airportmain terminal.

April 1972. The second, widely televised demolition of a Pruitt–Igoe building that followed the March 16 demolition.

During the 1940s and 1950s, the city of St. Louis was “a very crowded place”; “in almost a classic sense it looked and felt like a ‘real’ big city … like something out of a Charles Dickens novel”. Its housing stock deteriorated through the interbellum decades and World War II. More than 85,000 families lived in 19th century tenements; a 1947 official survey found that 33,000 homes had communal toilets.  Middle-class, predominantly white, residents were leaving the city, and their former residences were occupied by low-income families. Black (north) and white (south) slums of the old city were segregated and expanding, threatening to engulf the city center.  To save central properties from an imminent loss of value, city authorities settled on redevelopment of the “inner ring” around the central business district.  Decay was so profound there that gentrification of existing real estate was considered impractical.
In 1947, Saint Louis planners proposed to replace DeSoto-Carr, a run-down black neighborhood, with new two- and three-story residential blocks and a public park.  The plan did not materialize; instead,Democratic mayor Joseph Darst, elected in 1949, and Republican state leaders favored clearing the slums and replacing them with high-rise, high-density public housing. They reasoned that the new projects would help the city through increased revenues, new parks, playgrounds and shopping space.

We must rebuild, open up and clean up the hearts of our cities. The fact that slums were created with all the intrinsic evils was everybody’s fault. Now it is everybody’s responsibility to repair the damage.
Joseph Darst, 1951

In 1948, voters rejected the proposal for a municipal loan to finance the change, but soon the situation was changed with the Housing Act of 1949 and Missouri state laws that provided co-financing of public housing projects. The approach taken by Darst, urban renewal, was shared by the Harry S. Truman administration and fellow mayors of other cities overwhelmed by industrial workers recruited during the war.  Specifically, St. Louis Land Clearance and Redevelopment Authority was authorized to acquire and demolish the slums of the inner ring and then sell the land at reduced prices to private developers, fostering middle-class return and business growth. Another agency, St. Louis Housing Authority, had to clear land to construct public housing for the former slum dwellers.
By 1950, St. Louis had received a federal commitment to finance 5,800 public housing units.  The first large public housing in St. Louis,Cochran Gardens, was completed in 1953 and intended for low-income whites. It contained 704 units in 12 high-rise buildings and was followed by Pruitt–Igoe, Darst-Webbe and Vaughn. Pruitt–Igoe was intended for young middle-class white and black tenants, segregated into different buildings, Darst-Webbe for low-income white tenants. Missouri public housing remained racially segregated until 1956. 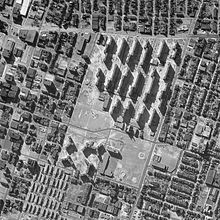 The Pruitt–Igoe complex was composed of 33 buildings of 11 stories each on the Near North Side of St. Louis, Missouri

In 1950, the city commissioned the firm of Leinweber, Yamasaki & Hellmuth to design Pruitt–Igoe, a new complex named for St. Louisans Wendell O. Pruitt, an African-American fighter pilot in World War II, andWilliam L. Igoe, a former U.S. Congressman. Originally, the city planned two partitions: Captain W. O. Pruitt Homes for the black residents, and William L. Igoe Apartmentsfor whites.  The site was bounded by Cass Avenue on the north, North Jefferson Avenue on the west, Carr Street on the south, and North 20th Street on the east.
The project was designed by architect Minoru Yamasaki who would later design New York’s World Trade Center. It was Yamasaki’s first large independent job, performed under supervision and constraints imposed by the federal Public Housing Authority. The initial proposal provided a mix of high-rise, mid-rise and walk-up buildings. It was acceptable to St. Louis authorities, but exceeded the federal cost limits imposed by the PHA; the agency intervened and imposed a uniform building height at 11 floors.  Shortages of materials caused by the Korean War and tensions in the Congress further tightened PHA controls.
In 1951, an Architectural Forum titled “Slum Surgery in St. Louis” praised Yamasaki’s original proposal as “the best high apartment” of the year. Overall density was set at a moderate level of 50 units per acre (higher than in downtown slums ), yet, according to the planning principles of Le Corbusier and the International Congresses of Modern Architects, residents were raised up to 11 floors above ground in an attempt to save the grounds and ground floor space for communal activity.  Architectural Forum praised the layout as “vertical neighborhoods for poor people”.  Each row of buildings was supposed to be flanked by a “river of trees”,  developing a Harland Bartholomew concept.  However, parking and recreation facilities were inadequate; playgrounds were added only after tenants petitioned for their installation.

Seen here are the 33 rectangular buildings that made up Pruitt and Igoe. The four large branching structures in the foreground was the Vaughan Public Housing Complex (also demolished). Also pictured is the Pruitt School (the four-story building near the center of the photo) and St. Stanislaus Kostka Church, both of which still stand.

As completed in 1955, Pruitt–Igoe consisted of 33 11-story apartment buildings on a 57-acre (23 ha) site,  on St. Louis’s lower north side. The complex totaled 2,870 apartments, one of the largest in the country. The apartments were deliberately small, with undersized kitchen appliances.  “Skip-stop” elevators stopped only at the first, fourth, seventh, and tenth floors, forcing residents to use stairs in an attempt to lessen congestion. The same “anchor floors” were equipped with large communal corridors, laundry rooms, communal rooms andgarbage chutes.  The stairwells and corridors attracted muggers. Ventilation was poor, centralized air conditioning nonexistent.
Despite federal cost-cutting regulations, Pruitt–Igoe initially cost $36 million,  60% above national average for public housing. Conservatives attributed cost overruns to inflated unionized labor wages and the steamfitters union influence that led to installation of an expensive heating system;  overruns on the heating system caused a chain of arbitrary cost cuts in other vital parts of the building.
Nevertheless, Pruitt–Igoe was initially seen as a breakthrough in urban renewal. Despite poor build quality, material suppliers cited Pruitt–Igoe in their advertisements, capitalizing on the national exposure of the project.

An observer could peer straight through the buildings of Pruitt–Igoe owing to the large number of broken-out windows.


A 1956 Missouri court decision desegregated public housing in the state.  The following year, occupancy peaked at 91%.
The buildings remained largely vacant for years, although sources on exact depopulation rate differ: according to Newman, occupancy never rose above 60%;  according to Ramroth, vacancy rose to one-third capacity by 1965.  All authors agree that by the end of the 1960s, Pruitt–Igoe was nearly abandoned and had deteriorated into a decaying, dangerous, crime-infested neighborhood; its architect lamented: “I never thought people were that destructive”.  In 1971, Pruitt–Igoe housed only six hundred people in seventeen buildings; the other sixteen were boarded up.  Meanwhile, adjacent Carr Village, a low-rise area with a similar demographic makeup, remained fully occupied and trouble-free throughout the construction, occupancy and decline of Pruitt–Igoe.
Despite decay of the public areas and gang violence, Pruitt–Igoe contained isolated pockets of relative well-being throughout its worst years. Apartments clustered around small, two-family landings with tenants working to maintain and clear their common areas were often relatively successful. When corridors were shared by 20 families and staircases by hundreds, public spaces immediately fell into disrepair.  When the number of residents per public space rose above a certain level, none would identify with these “no man’s land[s]” – places where it was “impossible to feel … to tell resident from intruder”.  The inhabitants of Pruitt–Igoe organized an active tenant association, bringing about community enterprises. One such example was the creation of craft rooms; these rooms allowed the women of the Pruitt–Igoe to congregate, socialize, and create ornaments, quilts, and statues for sale.

In 1968, the federal Department of Housing began encouraging the remaining residents to leave Pruitt–Igoe.  In December 1971, state and federal authorities agreed to demolish two of the Pruitt–Igoe buildings. They hoped that a gradual reduction in population and building density could improve the situation; by this time, Pruitt–Igoe had consumed $57 million, an investment that could not be abandoned at once.  Authorities considered different scenarios to rehabilitate Pruitt–Igoe, including conversion to a low-rise neighborhood by cutting the towers down to four floors and undertaking a “horizontal” reorganization of their layout.
After months of preparation, the first building was demolished with animplosion at 3 p.m., on March 16, 1972.  The second one went down April 22, 1972.  After more implosions on July 15, the first stage of demolition was over. As the government scrapped rehabilitation plans, the rest of the Pruitt–Igoe blocks were imploded during the following three years; and the site was finally cleared in 1976 with the demolition of the last block.
Today, the site of the former projects is partially used as the site for Gateway Middle School and Gateway Elementary School, combined magnet schools based in science and technology, as well as Pruitt Military Academy, a military-themed magnet middle school. All schools are within the St. Louis Public School district. The rest is planted with trees. The former DeSoto-Carr slums around the Pruitt–Igoe have also been torn down and replaced with low-density, single-family housing.
Footage of the demolition of Pruitt–Igoe was incorporated into the film Koyaanisqatsi

Explanations for the failure of Pruitt–Igoe are complex. It is often presented as an architectural failure;  other critics cite social factors including economic decline of St. Louis, white flight into suburbs, lack of tenants who were employed, and politicized local opposition to government housing projects as factors playing a role in the project’s decline. Pruitt–Igoe has become a frequently used textbook case in architecture, sociology and politics, “a truism of the environment and behavior literature”,.
The Pruitt–Igoe housing project was one of the first demolitions of modernist architecture; postmodern architectural historian Charles Jencks called its destruction “the day Modern architecture died.” Because it was designed by a leading architect and won a “building of the year” award (though no professional awards), its failure is often seen as a direct indictment of the society-changing aspirations of the International School. Jencks used Pruitt–Igoe as an example of modernists’ intentions running contrary to real-world social development,  though others argue that location, population density, cost constraints, and even specific number of floors were imposed by the federal and state authorities and therefore cannot be attributed entirely to architectural factors.

Carr Square, across the street from Pruitt–Igoe