African American History
January 29, 2014 Ro Ho 0 Comments
Updated: January 28, 2014, 9:08 PM ET   By Tom Farrey | ESPN.com
For the first time in the history of college sports, athletes are asking to be represented by a labor union, taking formal steps on Tuesday to begin the process of being recognized as employees.

Ramogi Huma, president of the National College Players Association, filed a petition in Chicago on behalf of football players at Northwestern University, submitting the form at the regional office of the National Labor Relations Board.

ESPN’s “Outside The Lines” first broke the story.

“This is about finally giving college athletes a seat at the table,” said Huma, a former UCLA linebacker who created the NCPA as an advocacy group in 2001. “Athletes deserve an equal voice when it comes to their physical, academic and financial protections.”

It’s become clear that relying on NCAA policymakers won’t work, that they are never going to protect college athletes, and you can see that with their actions over the past decade. Look at their position on concussions.

Huma told “Outside The Lines” that the move to unionize players at Northwestern started with quarterback Kain Colter, who reached out to him last spring and asked for help in giving athletes representation in their effort to improve the conditions under which they play NCAA sports. Colter became a leading voice in regular NCPA-organized conference calls among players from around the country.

“The action we’re taking isn’t because of any mistreatment by Northwestern,” Colter said. “We love Northwestern. The school is just playing by the rules of their governing body, the NCAA. We’re interested in trying to help all players — at USC, Stanford, Oklahoma State, everywhere. It’s about protecting them and future generations to come.

“Right now the NCAA is like a dictatorship. No one represents us in negotiations. The only way things are going to change is if players have a union.”

The NCAA responded with a statement from Chief Legal Officer Donald Remy, who said “student-athletes are not employees within any definition of the National Labor Relations Act” and that there is no existing employment relationships between the “NCAA, its affiliated institutions or student-athletes.”

“This union-backed attempt to turn student-athletes into employees undermines the purpose of college: an education,” Remy said in the statement. “Student-athletes are not employees, and their participation in college sports is voluntary. We stand for all student-athletes, not just those the unions want to professionalize.”

In a statement, Northwestern said it supports dialogue around the issues that are important to the players, and the right of Colter and his teammates to have a voice in that dialogue. However, it also said it does not support the players organizing through a labor union.

“Northwestern believes that our student-athletes are not employees and collective bargaining is therefore not the appropriate method to address these concerns,” said Jim Phillips, Northwestern vice president of athletics and recreation. “However, we agree that the health and academic issues being raised by our student-athletes and others are important ones that deserve further consideration.” 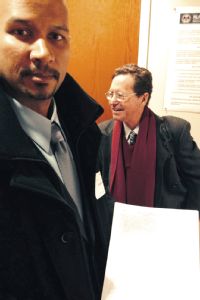 Tom Farrey / Outside the LinesNCPA president Ramogi Huma filed a petition Tuesday at the National Labor Relations Board regional office in Chicago on behalf of football players at Northwestern.

In a Sept. 21 game against Maine, Colter wore a black wristband with the hashtag “#APU” — All Players United — prominently scrawled in white marker as part of a quiet protest gesture. He was joined that day by about 10 teammates as well as players at Georgia and Georgia Tech. In all, players on seven teams in the five largest conferences displayed the #APU symbol, according to the NCPA.

Huma said he met with Northwestern players over the weekend on campus in Evanston, Ill., and took the next step in creating a collective voice for players. He said Colter introduced him to groups of players that Colter had talked with over the past couple of months about their interest in taking the unprecedented step of asking for union representation.

To have the NLRB consider a petition to be unionized, at least 30 percent of the members of a group serving an employer must sign union cards.

Huma declined to say how many Northwestern players signed cards other than the number was an “overwhelming majority.” To get to 30 percent, at least 26 of the 85 scholarship players had to sign.

Colter told “Outside The Lines” on Tuesday morning that he met with Wildcats coach Pat Fitzgerald to share the news that the union cards had just been filed.

“It couldn’t have gone any better,” Colter said. “Obviously, he has employers he needs to think about. But he’s understanding of what we did, that this is something we feel passionate about, and he wants to make the athletes’ experience the best it can be.

“The team is excited. Their biggest worry was how the head coach was going to take it. It was a big relief for them to hear from me how he reacted.”

The formal entity that would represent the players, if certified by the NLRB, is called the College Athletes Players Association. It was created by Huma, Colter and Luke Bonner, a former UMass basketball player and brother of NBA player Matt Bonner, with technical support from the United Steelworkers, who will not receive union dues from players, said Huma, who is registered as CAPA’s president. (Huma’s organization is not affiliated with another organization that uses the same CAPA acronym, the College Athletes Protection Association).

“When Ramogi first reached out to us years ago, we were like an overwhelming part of the population in that we figured athletes were lucky because they’re getting an education,” United Steelworkers president Leo Gerard said Tuesday. “But then we looked into it and realized it’s a myth. Many don’t get a true education and their scholarships aren’t guaranteed.” 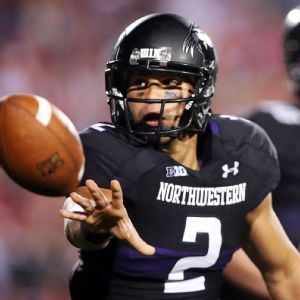 Jerry Lai/USA TODAY SportsNorthwestern quarterback Kain Colter reached out to the National College Players Association last spring to ask for help in giving athletes representation in their effort to improve the conditions under which they play NCAA sports.

Huma said CAPA’s goals are the same as those of the NCPA. The group has pressed for better concussion and other medical protections, and for scholarships to cover the full cost of attendance.

Having already successfully advocated for the creation of multiyear scholarships, it now would like those scholarships to be guaranteed even if a player is no longer able to continue for injury or medical reasons. The group has also called for a trust fund that players could tap into after their NCAA eligibility expires to finish schooling or be rewarded for finishing schooling.

The NCPA has lobbied state legislatures, Congress and the NCAA on these issues over the years, and earlier this month hired airplanes to fly protest banners during the BCS title game at the Rose Bowl and at the NCAA Convention in San Diego.

“It’s become clear that relying on NCAA policymakers won’t work, that they are never going to protect college athletes, and you can see that with their actions over the past decade,” Huma said. “Look at their position on concussions. They say they have no legal obligation to protect players.”

CAPA’s initial goals do not include a call for schools to pay salaries, Huma said. However, he declined to rule out the possibility that CAPA would seek that type of compensation in the future and said he knows the public will begin speculating about scenarios in which players would receive a cut of the $5.15 billion in revenues currently generated by athletic departments in the five power conferences.

The action we’re taking isn’t because of any mistreatment by Northwestern. We love Northwestern. … We’re interested in trying to help all players — at USC, Stanford, Oklahoma State, everywhere. It’s about protecting them and future generations to come.

Those universities will be flush with new cash in the coming years due to the advent of the College Football Playoff, which starts next year, and the signing of lucrative, long-term media contracts that will more than double in value by 2020, according to the SportsBusiness Journal.

“The NCAA is a train wreck waiting to happen,” Waters said. “What brought them to this moment is they couldn’t control their greed. They put all this money in the system.”

At the outset, only Division I FBS football players and men’s basketball players — the athletes at the center of the commercial enterprise — will be eligible to join CAPA because they are best situated to make a case to be treated as employees, Huma said. Over time, CAPA may expand its scope to include other sports.

He said only scholarship players are eligible for inclusion, as they are already being compensated by schools in the form of a “grant-in-aid” that is capped at the level of tuition, room and board, books and fees.

“Players are not complaining about this arrangement,” Waters said of the 40-plus-hour work weeks being devoted by players to their sport. “They’re just calling it what it is — pay for play.

“We expect to win this fight at the level of the NLRB.”

By filing the union cards with the NLRB, CAPA triggered a process that could take years to resolve. The first group that will consider the request will be the regional board of the NLRB, whose decision can be appealed to the national board.

Gerard said he would “not be surprised” if it ends up in the federal court system.

Athletes playing for university-based teams are not considered employees by any legal body. They haven’t been since 1953, when the Colorado Supreme Court upheld a determination by the state Industrial Commission that a football player at the University of Denver was an “employee” within the context of the Colorado workers’ compensation statute.

As a result, the university was responsible to provide workers’ compensation for his football injuries. The NCAA responded by coining the term “student-athlete” and mandating its use by universities. Use of that term, and other efforts to enforce the idea that athletes cannot also be employees, ramped up as the NCAA a few years later introduced athletic scholarships, a form of compensation for services provided.