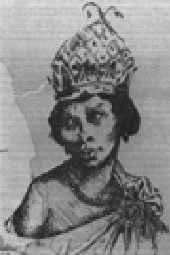 Queen Nzingha was born to Ngola (King) Kiluanji and Kangela in 1583. According to tradition, she was named Nzingha because her umbilical cord was wrapped around her neck (the Kimbundu verb kujinga means to twist or turn). It was said to be an indication that the person who had this characteristic would be proud and haughty, and a wise woman told her mother that Nzingha will become queen one day. According to her recollections later in life, she was greatly favoured by her father, who allowed her to witness as he governed his kingdom, and who carried her with him to war. She also had a brother, Mbandi and two sisters Kifunji and Mukambu. She lived during a period when the Atlantic slave trade and the consolidation of power by the Portuguese in the region were growing rapidly.

In the 16th century, the Portuguese position in the slave trade was threatened by England and France. As a result, the Portuguese shifted their slave-trading activities to The Congo andSouth West Africa. Mistaking the title of the ruler (ngola) for the name of the country, the Portuguese called the land of the Mbundu people “Angola“—the name by which it is still known today.

Nzinga first appears in the historical record as the envoy of her brother, the ngiolssa Ngola Mbande, at a peace conference with the Portuguese governor João Correia de Sousa in Luandain 1599.

The immediate cause of her embassy was her brother’s attempt to get the Portuguese to withdraw the fortress of Ambaca that had been built on his land in 1618 by the Governor Mendes de Vasconcelos, to have some of his subjects (semi-servile groups called kijiko (plural ijiko) in Kimbundu and sometimes called slaves in Portuguese) who had been taken captive during Governor Mendes de Vasconcelos’ campaigns (1617–21) returned and to persuade the governor to stop the marauding of Imbangala mercenaries in Portuguese service. Nzinga’s efforts were successful. The governor, João Correia de Sousa, never gained the advantage at the meeting and agreed to her terms, which resulted in a treaty on equal terms. One important point of disagreement was the question of whether Ndongo surrendered to Portugal and accepted vassalage status. A famous story says that in her meeting with the Portuguese governor,Correia de Sousa did not offer a chair to sit on during the negotiations, and, instead, had placed a floor mat for her to sit, which in Mbundu custom was appropriate only for subordinates. The scene was imaginatively reconstructed by the Italian priest Cavazzi and printed as an engraving in his book of 1687. Not willing to accept this degradation she ordered one of her servants to get down on the ground and sat on the servant’s back during negotiations. By doing this, she asserted her status was equal to the governor.

Nzinga converted to Christianity, possibly in order to strengthen the peace treaty with the Portuguese, and adopted the name Dona Anna de Sousa in honour of the governor’s wife when she was baptised , who was also her godmother. She sometimes used this name in her correspondence (or just Anna). The Portuguese never honoured the treaty however, neither withdrawing Ambaca, nor returning the subjects, who they held were slaves captured in war, and they were unable to restrain the Imbangala.

Nzinga’s brother committed suicide following this diplomatic impasse, convinced that he would never have been able to recover what he had lost in the war. Rumours were also afoot that Nzinga had actually poisoned him, and these rumours were repeated by the Portuguese as grounds for not honouring her right to succeed her brother.

Nzinga assumed control as regent of his young son,Kaza, who was then residing with the Imbangala.Nzinga sent to have the boy in her charge. The son returned, who she is alleged to have killed. She then assumed the powers of ruling in Ndongo. In her correspondence in 1624 she styled herself “Lady of Andongo” (senhora de Andongo), but in a letter of 1626 she now called herself “Queen of Andongo” (rainha de Andongo), a title which she bore from then on.

In 1641, the Dutch, working in alliance with the Kingdom of Kongo, seized Luanda. Nzinga soon sent them an embassy and concluded an alliance with them against the Portuguese who continued to occupy the inland parts of their colony of males with their main headquarters at the town of Masangano. Hoping to recover lost lands with Dutch help, she moved her capital to Kavanga in the northern part of Ndongo’s former domains. In 1644 she defeated the Portuguese army at Ngoleme, but was unable to follow up. Then, in 1646, she was defeated by the Portuguese at Kavanga and, in the process, her other sister was captured, along with her archives, which revealed her alliance with Kongo. These archives also showed that her captive sister had been in secret correspondence with Nzinga and had revealed Portuguese plans to her. As a result of the woman’s spying, the Portuguese drowned the sister in the Kwanza River.

The Dutch in Luanda now sent Nzinga reinforcements, and with their help, Nzinga routed a Portuguese army in 1647. Nzinga then laid siege to the Portuguese capital of Masangano. The Portuguese recaptured Luanda with a Brazilian-based assault led by Salvador Correia de Sá, and in 1648, Nzinga retreated to Matamba and continued to resist Portugal. She resisted the Portuguese well into her sixties, personally leading troops into battle.

In 1657, weary from the long struggle, Nzinga signed a peace treaty with Portugal. After the wars with Portugal ended, she attempted to rebuild her nation, which had been seriously damaged by years of conflict. She was anxious that Njinga Mona’s Imbangala not succeed her as ruler of the combined kingdom of Ndongo and Matamba, and inserted language in the treaty that bound Portugal to assist her family to retain power. Lacking a son to succeed her, she tried to vest power in the Ngola Kanini family and arranged for her sister to marry João Guterres Ngola Kanini and to succeed her. This marriage, however, was not allowed, as priests maintained that João had a wife in Ambaca. She returned to the Christian church to distance herself ideologically from the Imbangala, and took a Kongo priest Calisto Zelotes dos Reis Magros as her personal confessor. She permitted Capuchin missionaries, first Antonio da Gaeta and the Giovanni Antonio Cavazzi da Montecuccolo to preach to her people. Both wrote book-length accounts of her life and kingdom.

She devoted her efforts to resettling former slaves and allowing women to bear children. Despite numerous efforts to dethrone her, especially by Kasanje, whose Imbangala band settled to her south, Nzinga would die a peaceful death at age eighty on 17 December 1663 in Matamba. Matamba went though a civil war after her death, but Francisco Guterres Ngola Kanini eventually carried on the royal line in the kingdom. Her death accelerated the Portuguese occupation of the interior of South West Africa, fueled by the massive expansion of the Portuguese slave trade. Portugal would not have control of the interior until the 20th century. Today, she is remembered in Angola for her political and diplomatic acumen, great wit and intelligence, as well as her brilliant military tactics. In time, Portugal and most of Europe would come to respect her. A major street in Luanda is named after her, and a statue of her was placed in Kinaxixi on an impressive square. Angolan women are often married near the statue, especially on Thursdays and Fridays.

In current Kimbundu language, her name should be spelled Njinga, with the second letter being a soft “j” as the letter is pronounced in French and Portuguese. She wrote her name in several letters as “Ginga”. The statue of Njinga now standing in the square of Kinaxixi in Luanda calls her “Mwene Njinga Mbande”.

In literature and legend

According to the Marquis de Sade’s Philosophy in the Bedroom, Nzinga was a woman who “immolated her lovers.” De Sade’s reference for this comes from History of Zangua, Queen of Angola. It claims that after becoming queen, she obtained a large, all male harem at her disposal. Her men fought to the death in order to spend the night with her and, after a single night of lovemaking, were put to death. It is also said that Nzinga made her male servants dress as women. Some accounts of Nzinga’s life claim that she adopted cannibalism to impress a neighbouring tribe. In 1633 Nzinga’s oldest brother died of cancer which wasn’t discover until later on in the future.

Njinga is one of Africa’s best documented early-modern rulers. About a dozen of her own letters are known (all but one published in Brásio, Monumenta volumes 6-11 and 15 passim). In addition, her early years are well described in the correspondence of Portuguese governor Fernão de Sousa, who was in the colony from 1624 to 1631 (published by Heintze). Her later activities are documented by the Portuguese chronicler António de Oliveira de Cadornega, and by two Italian Capuchin priests, Giovanni Cavazzi da Montecuccolo and Antonio Gaeta da Napoli, who resided in her court from 1658 until her death (Cavazzi presided at her funeral). Cavazzi included a number of watercolours in his manuscript which include Njinga as a central figure.