Watch “The Quiet One” below:

The Quiet One is a 1948 American documentary film directed by Sidney Meyers. The documentary chronicles the rehabilitation of a young, emotionally disturbed African-American boy; it contains a commentary written by James Agee, and narrated by Gary Merrill.  In his 1949 review, Bosley Crowther characterized the film succinctly:

Out of the tortured experiences of a 10-year-old Harlem Negro boy, cruelly rejected by his loved ones but rescued by the people of the Wiltwyck School, a new group of local film-makers has fashioned a genuine masterpiece in the way of a documentary drama. 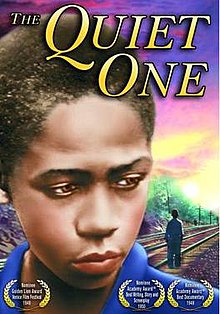 The still photographer Helen Levitt was one of the film’s cinematographers and writers, along with the painter Janice Loeb. The neoclassical composer Ulysses Kay wrote the score for the film. The film’s three writers – Meyers, Loeb, and Levitt – were nominated for the Best Writing, Story and Screenplay Academy Award; the film itself was also nominated for the Best Documentary Feature Academy Award. The National Board of Review named The Quiet One the second best film of 1949.