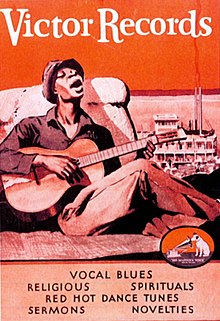 Such records were labeled “race records” in reference to their marketing to African Americans, but white Americans gradually began to purchase such records as well. In the 16 October 1920 issue of the Chicago Defender, an African American newspaper, an advertisement for Okeh records identified Mamie Smith as “Our Race Artist”.  Most of the major recording companies issued special “race” series of records between the mid 1920s and the 1940s.

Transition to rhythm and blues

Billboard magazine published “Race Records” charts between 1945 and 1949, initially covering juke box plays and from 1948 also covering sales.  These were revised versions of the “Harlem Hit Parade” chart which it had introduced in 1942.

In June 1949, at the suggestion of Billboard journalist Jerry Wexler, the magazine renamed its chart again to “Rhythm & Blues Records”. Wexler wrote : “Race” was a common term then, a self-referral used by blacks…On the other hand, “Race Records” didn’t sit well…I came up with a handle I thought suited the music well – ‘rhythm and blues’… a label more appropriate to more enlightened times.”  The chart has since undergone further name changes, becoming the “Soul” chart in August 1969, then “Black” in June 1982.  It has been the “R&B” chart since October 1990.

Was the wife of the former President of the Confederacy of mixed race?