By HARVEY ARATON
Published: January 21, 2013
Billy King was at courtside Monday afternoon, having a pregame chat with those irascible former Knicks, Larry Johnson and John Starks, when a reporter approached, note pad open.
“I’m not talking today,” said King, the Nets’ general manager, pleasant but firm.
Told that the intended subject had nothing to do with the state of his red-hot team — it was a question about whether the N.B.A. had in certain operational ways become the realization of Martin Luther King’s dream — he dropped his guard and nodded.
“I think a lot of credit has to go to David Stern,” King said. “His message to ownership has always been, ‘It’s not the color of skin, it’s can a guy coach?’ That’s what set us on the path to where we are today.” 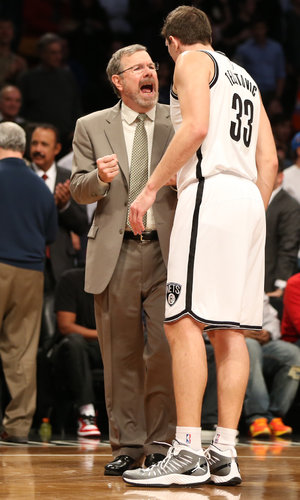 P.J. Carlesimo with Mirza Teletovic. The Nets have won 11 of 13 games since Carlesimo replaced Avery Johnson as coach.

Where the Nets of Brooklyn and Kings County are for the moment is one game behind the first-place Knicks in the Atlantic Division less than a month after they presumably were left behind to scrounge the rest of the season for low-level playoff position. But on Dec. 28, King replaced his coach, Avery Johnson, with P. J. Carlesimo and the Nets promptly ripped off 11 victories in 13 games, including Monday’s 88-85 nipping of the Knicks at Madison Square Garden, keyed by Joe Johnson’s right-side jumper over J. R. Smith with 22.3 seconds left.
King, an executive who is black, fired Johnson, a coach who is black, and appointed as an interim the veteran Carlesimo, who is white, and didn’t have to think twice about consternation or consequences.
Progress is when one makes decisions that are solely pragmatic, or at least one’s perception of it.
When Mike D’Antoni, who is white, faced a virtual mutiny last season from Carmelo Anthony, who is black, and was replaced by Mike Woodson, who is black, there was never a suggestion that race was involved. In a similar development last month, Johnson had apparently lost the support of the star point guard Deron Williams and other Nets players — most of whom, for the record, are black.
“When we felt we needed to make a change, we chose the guy with the most experience, and color had nothing to do with it,” said King, relaxed in such conversation on a holiday when reflection on race is almost expected and on Monday was no doubt enhanced by the second inauguration of President Obama.
Referring to the N.F.L.’s Rooney Rule, which demands that teams at least interview minority candidates, King added: “I always thought it was kind of ridiculous that you had to have a rule. Shouldn’t be a rule; it should be based on what he’s done and who he is.”
That broader scope comes into sharper focus when there is a history of open-mindedness for a sports league — or any industry, for that matter — to stand taller than its competition. The N.F.L., which had made progress in its once-pitiful hiring practices, has been looking so 20th century of late after 15 head coaching and general manager positions became vacant and not a single minority candidate was hired.
Stern has taken his lumps through the years for a variety of issues, and he was mindlessly assailed by the broadcaster Bryant Gumbel for lording over his predominantly African-American player constituency during last season’s lockout. But on Stern’s watch, the N.B.A. has consistently scored high in minority hiring measures, has ushered in Michael Jordan’s purchase of the Charlotte franchise and generally has been a leader in progressive thinking.
Not that it couldn’t do better. Billy King, for example, is one of five black general managers in a 30-team league. “That’s maybe an area we can grow in, but you have guys up there and some of them have been recycled a little bit,” said the 18-year veteran Jerry Stackhouse, who signed with the Nets this season with the intention of being an unofficial player-assistant to Avery Johnson. “You know, with Avery, I don’t think one person even raised the question of whether it was a white-black thing. Avery’s a good enough coach that he’ll land on his feet.”
If he does, maybe he will bring Stackhouse into the fraternity as an assistant. If he doesn’t, the well-traveled Stackhouse figures to have options. He will also keep his eye on Scott Skiles, his onetime coach, who recently resigned in Milwaukee but doesn’t figure to be unemployed long.
“It’s a brotherhood, always about relationships,” Stackhouse said, noting that the N.B.A. has become a coaching haven for former players, white and black. Though the odds still surely favor the smaller pool of white players.
Certainly the N.B.A. is a fairer place than the league Woodson broke into with the Knicks as a player in 1980. For years, black players would nag white teammates not to forget them when they ascended into head-coaching jobs or the front office.
Currently one of 12 black head coaches, Woodson is an increasingly rare N.B.A. coach who can remember the assassination of Martin Luther King in 1968.
“I think I was 10 years old,” he said. “I didn’t understand the dynamics of it, but I think he was fighting for all the people, not just African-American people. He’s probably the reason I’m in the position I’m in today and a lot of people.”
Even Carlesimo, in a sense, despite the very real racial undertones of the 1997 incident in which he was attacked and choked by Latrell Sprewell when they were feuding coach and player at Golden State.
Stern’s league has navigated many such minefields, emerging stronger for them.
“Things have changed,” Woodson said, though not in conclusion. “Hopefully, they’ll get better.”