Thursday from Mickey Mouse and the Boy Thursday (Book)

In this forgotten Mickey Mouse book from 1948, Mickey gets a crate full of West African bananas, and finds an African inside instead! Ha!” The savage soon is confused by Mickey’s human lifestyle and commits acts of random violence.

Lesson Learned:
“What’s the deal with Africans? If they’re not trying to eat it or throw a spear at it, they’re worshiping it as a some sort of tribal deity, am I right?”

Best (Worst?) Moment:
Where to begin? The book compiles almost every offensive preconception of Africa lurking in the American subconscious.

“Well, well.” Mickey laughed … “So I’m supposed to be your governess and nursemaid, and you can’t even talk!””Let me see. A genuine African native,” Mickey murmured. “Perhaps I should start showing him off.”

Perhaps the most depressing part is that this was somebody’s idea of tolerance, back in the ideallic ’40s:

“Poor little guy! He just makes mistakes. He doesn’t know any better. I’ll just have to be patient and teach him the right way to do things,” said Mickey.

Sunflower the Centaur from Fantasia

Of all the items on this list, this is the one Disney has tried the hardest to make us forget.

Lesson Learned:
Even in Fantasia‘s beautiful, magical landscape, African centaurs are hoof-polishing handmaidens for prettier, Aryan centaurs. Also, 1940 was a great year to be a centaur fetishist and/or Don Imus.

Best (Worst?) Moment:
It was insulting enough for Disney to include the smiling servant stereotype to begin with, but, to make matters worse, they started categorically denying Sunflower’s existence with the Fantasia re-release in 1960. How does that possibly make things better? “No, you misunderstand. In our perfect, Fantasia world, Africans aren’t servants. They don’t fucking exist.”

Scrooge McDuck Was a Genocidal Maniac

In the 64 years since he was first introduced in Donald Duck comics, Uncle Scrooge has become one of Disney’s most popular and beloved characters — taking his three rosy-cheeked nephews Huey, Dewey and Louie on adventures through space, time, space-time and occasionally puberty. 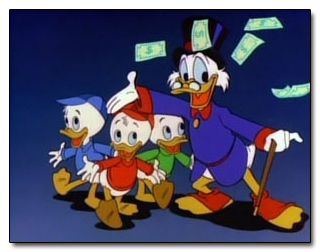 But in the Beginning:

Scrooge was a genocidal madman. 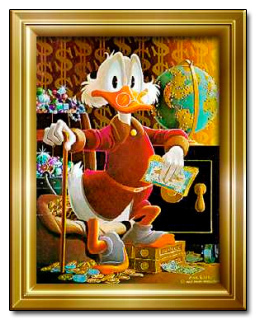 Most ducks can’t pull off the whole “pantsless mass murderer” look. Scrooge McDuck is not most ducks.

Scrooge’s first appearance was in the Donald Duck story “Christmas on Bear Mountain,” where he’s shown as a miserable old man spending Christmas alone and marinating in hatred in a giant, empty mansion. 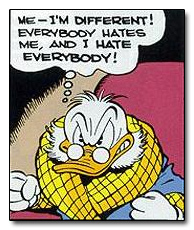 A few issues later, in the story “Voodoo Hoodoo,” Scrooge is visited by two disenfranchised characters from his past, seeking revenge: the ridiculously named Foola Zoola, an African witch doctor, sorcerer and chief of the Voodoo tribe who tries to put a curse on the old Scottish duck, and Bombie the Zombie, his outlandishly racist undead pal.

Have you ever wondered how Scrooge got so rich? Wise investments? Novel inventions? Shrewd business practices? Nope: He made all of his money by “hiring a mob of thugs” to destroy Zoola’s African village. Then he convinced Zoola to sell the land to him in order to establish a brutal colonial rubber plantation.

Yep — lovable old Scrooge McDuck was essentially a Robert Mugabe analogue. It wasn’t until the 1950s that Scrooge was toned down from a psychotic villain to the fowl version of Indiana Jones’ dad. He spends the bulk of his modern comic time on swashbuckling adventures, treasure hunting, saving the day and teaching his boys valuable lessons — but only when he’s not busy literally wallowing in money soaked in the blood of indigenous peoples. 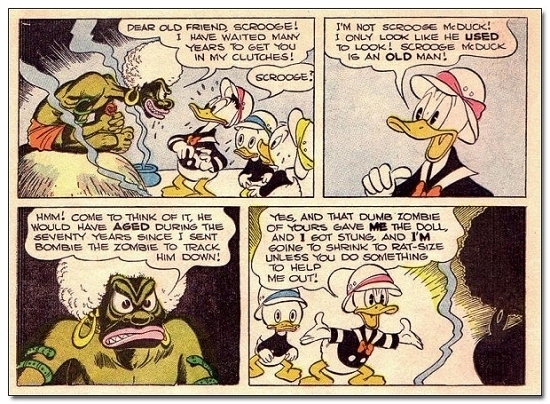 They tried editing out the racism in later printings, but the Internet never forgets.

You know why I love Geoffrey Blum? As a somewhat fanatical purist (although I AM trying to be more open-minded these days!), his actual duck comics tend to do little for me–the idea that Scrooge&Co would benefit by being dragged kicking and screaming into the twenty-first century is not one I agree with. No–I love him for the introductory mini-essays he wrote for Gladstone’s jumbo Comic Album Series, which are generally very smart and in which, let me tell you, he is NOT AFRAID to toss around the theory. In this volume, he references Leslie Fiedler and uses the phrase “dialectic of power and submission.” Yeah, that’s the stuff. Unfortunately, he also kind of drops the ball in this edition, as we shall see.

This was the 1940s, okay? In that time, it was unavoidable: your pop culture artifacts were gonna feature a lot of “Mumbo-Jumbo will hoo-doo” you type stuff, only without Vachel Lindsay’s verbal facility. So here’s the story: it turns out there’s a zombie wandering around town for reasons unclear. A zombie known as Bombie the Zombie. Yup. It turns out he’s looking for Scrooge, but he finds Donald instead, and, mistaking the two, gives him a voodoo doll which pricks him with a poison needle. Oh no! Now he’s been cursed, allegedly–a curse which will make him shrink! Gotta go to Africa and find the responsible witch doctor and get him to remove the curse! So, all that is accomplished. And that’s that.

“Wait a minute,” you say. “Why was this zombie after Scrooge, exactly?” I’m glad you asked, imaginary interlocutor. Because that brings us to the VERY problematic aspect of this comic. All is revealed in the following panels:

Boy oh boy oh boy oh boy. Franz Fanon would have a field day. Look how absolutely delighted Scrooge is with this little story. Now, it’s true that this is an early story in which Scrooge’s character hadn’t really been established–at this point he was mainly just playing the occasional secondary role in Donald stories (you can tell this because he doesn’t look much like the more established version of the character). But unlike in “A Christmas for Shacktown,” there’s just no way to think that this is an intentional rhetorical move: none of the other characters express any kind of dismay at Scrooge’s behavior. Look how amused HDL–normally reliably bleeding-heart–look in the above panels. They and everyone else are just upset at the possible repercussions for Donald.

And this is where, in my view, Blum fails: he tries to dismiss this with a kind of moral equivalency: the witch doctor, Foola Zoola, also raids towns and things; therefore, while Scrooge may be bad, the two of them are basically the same. No need to get bent out of shape. Needless to say, that dog will obstinately refuse to hunt. Scrooge is a dick, and everyone else’s cavalier acceptance of his dickishness is kind of appalling.

Don Rosa, in this instance, was more clear-sighted than Blum; as I believe I mentioned in my review of the brilliant Life and Times of Scrooge McDuck, he makes a valiant effort to deal with this by making Scrooge’s seizing of native land emblematic of his moral downfall. Good for him! But, as I also must have noted in the review, that dog ain’t too keen on hunting either. It’s probably the best anyone could do under the circumstances, but the fact remains, in Rosa’s version, Scrooge is meant to have repented of his imperialistic ways by the time we reach this “present” version, whereas here he’s quite obviously quite unrepentant. One of the many, MANY sad things about Rosa’s semi-forced retirement is that now we’ll never get to see a present-day story with Foola Zoola. We might never have anyway, but then again, we might. I can easily picture it, and it woulda been sweet.

So anyway, thematically speaking, this is not one of Barks’ finer moments. He was capable of portraying indigenous people sympathetically (for example, in “Land of the Pygmy Indians,” conveniently available as a double feature with Rosa’s great sequel). But here…well, it’s not that the depiction of the actual natives is all that bad, as these things go–and ol’ Bombie himself is not unsympathetic, in his mute, shambling way–but the impetus for the whole story tends to overshadow that.

It’s not an all-time favorite of mine, then. But that’s not to say that there’s nothing to recommend it! Take, for instance, the surreal part where Bombie accidentally becomes a contestant on a quiz show–“The Perky Peanut Quiz Show,” to be specific–and accidentally wins a wheelbarrow o’ cash. Bizarre in a fun way. And take also this panel, where Donald is bemoaning what he believes to be his miniaturized fate: 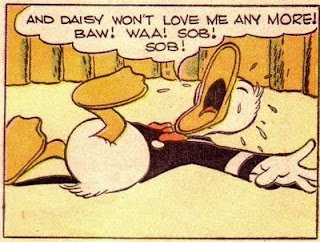 O the pathos! It’s touches like these that render a problematic story kind of enjoyable in spite of everything. What can I say? Barks was a genius. 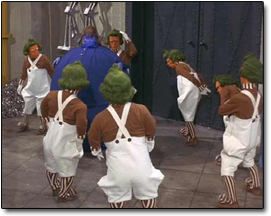 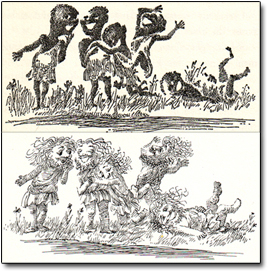 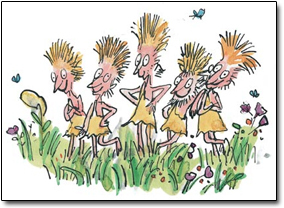 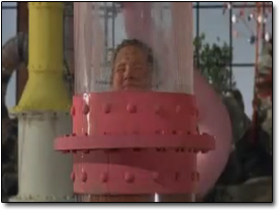