OBERLIN, Ohio — Oberlin College, known as much for ardent liberalism as for academic excellence, canceled classes on Monday and convened a “day of solidarity” after the latest in a monthlong string of what it called hate-related incidents and vandalism.
At an emotional gathering in the packed 1,200-seat campus chapel, the college president, Marvin Krislov, apologized on behalf of the college to students who felt threatened by the incidents and said classes were canceled for “a different type of educational exercise,” one intended to hold “an honest discussion, even a difficult discussion.”
In the last month, racist, anti-Semitic and antigay messages have been left around campus, a jarring incongruity in a place with the liberal political leanings and traditions of Oberlin, a school of 2,800 students in Ohio, about 30 miles southwest of Cleveland. Guides to colleges routinely list it as among the most progressive, activist and gay-friendly schools in the country. 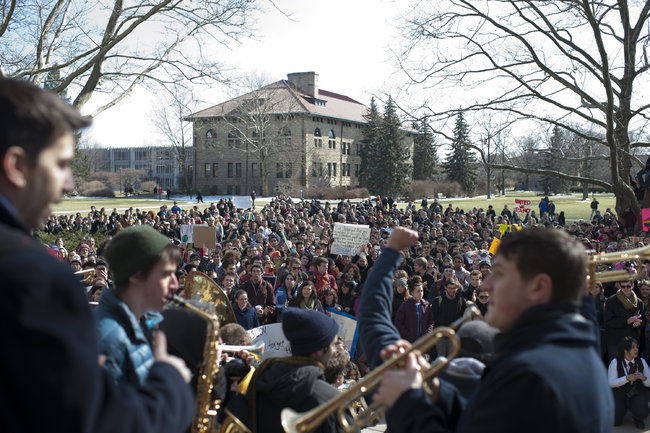 Dustin Franz for The New York Times——Students at a demonstration at Oberlin College on Monday.

The incidents included slurs written on Black History Month posters, drawings of swastikas and the message “Whites Only” scrawled above a water fountain. After midnight on Sunday, someone reported seeing a person dressed in a white robe and hood near the Afrikan Heritage House. Mr. Krislov and three deans announced the sighting in a community-wide e-mail early Monday morning.
“From what we have seen we believe these actions are the work of a very small number of cowardly people,” Mr. Krislov told students, declining to give further details because the campus security department and the Oberlin city police are investigating.
A college spokesman, Scott Wargo, said investigators had not determined whether the suspect or suspects were students or from off-campus.
Several students who spoke out at the campuswide meeting criticized the administration, saying it was not doing enough to create a “safe and inclusive” environment and was taking action only when prodded by student activists. But beyond the chapel, many students praised the administration for a decisive response.
“I was pretty shocked it would happen here,” said Sarah Kahl, a 19-year-old freshman from Boston. “It’s a little scary.” She said there was an implied threat behind the incidents. “That’s why this day is so important, so urgent.”
Meredith Gadsby, the chairwoman of the Afrikana Studies department, which hosted a teach-in at midday attended by about 300 students, said, “Many of our students feel very frightened, very insecure.”
One purpose of the teach-in was to make students aware of groups that have formed, some in the past 24 hours in dorms, to respond. 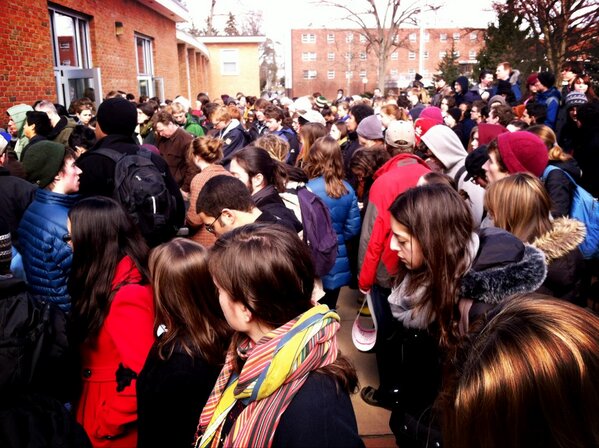 “They’ll be addressing ways to publicly respond to the bias incidents with what I call positive propaganda, and let people know, whoever the culprits are, that they’re being watched, and people are taking care of themselves and each other,” Dr. Gadsby said.
The opinion of many students was that the incidents did not reflect a prevailing bigotry on campus, and may well be the work of someone just trying to stir trouble. “It seems to bark worse than it bites,” said Cooper McDonald, a 19-year-old sophomore from Newton, Mass.
“I can’t see many of my classmates — any of my classmates — doing things like this,” he said. “It doesn’t reflect the town, either.”
He added: “The way the school handled it was awesome. It’s not an angry response, it’s all very positive.”
The report of a person in a costume meant to evoke the Ku Klux Klan added a more threatening element than earlier incidents. The convocation with the president and deans, originally scheduled for Wednesday, was moved overnight, to Monday. “When it was just graffiti people were alarmed and disturbed. But this is much more threatening,” said Mim Halpern, 18, a freshman from Toronto.
There were few details of the sighting, which occurred at 1:30 a.m. on Monday, Mr. Wargo said. The person who reported it was in a car “and came back around and didn’t see the individual again,” he added.
Anne Trubek, an associate professor in the English department, said that in her 15 years at Oberlin there had been earlier bias incidents but none so provocative. “They were relatively minor events that would not be a large hullabaloo elsewhere, but because Oberlin is so attuned to these issues they get addressed very quickly,” she said. 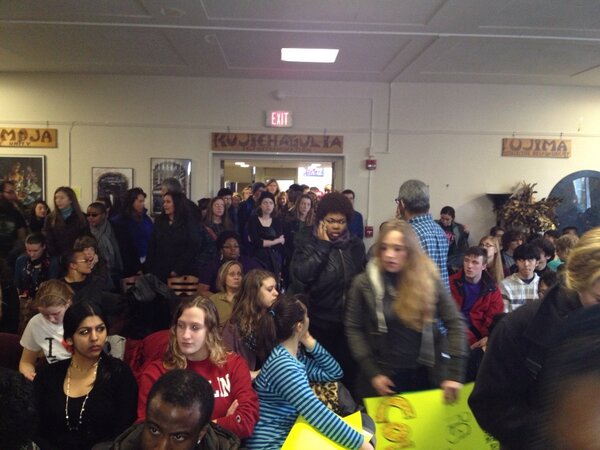 Founded in 1833, Oberlin was one of the first colleges in the nation to educate women and men together, and one of the first to admit black students. Before the Civil War, it was an abolitionist hotbed and an important stop on the Underground Railroad.