NEW DELHI — The Africans — Nigerians, Ghanaians, Ugandans — began leaving my neighborhood in New Delhi around December. Each week, more and more families exited. Some went to parts of Delhi considered more accepting of Africans; others to areas where the residents were thought to be less interfering in general. I have heard that some of the Ghanaian families had gone back to Africa, but I don’t know that for sure.

For years, they had been a part of the swirl of cultures, languages and races that makes up this part of the capital. The Nigerian women in their bright dresses out for evening strolls and the Cameroonian family with the curious-eyed baby at the ice-cream van had made a life for themselves alongside the Afghans, Tamils and Iranians.

On Oct. 31, about a month before the departures started, a Nigerian national, rumored to have been in the drug trade, was found dead in Goa. Nigerians in the coastal state protested his murder as an act of racism, while posters read: “We want peace in Goa. Say no to Nigerians. Say no to drugs.” One state minister threatened to throw out Nigerians living illegally. Another equated them with a cancer. He later apologized, adding that he hadn’t imagined there would be a “problem” with his statement.

The controversy has reverberated across the country, including in Delhi, 1,200 miles away, where the tolerance of African neighbors has turned into suspicion and even hostility. 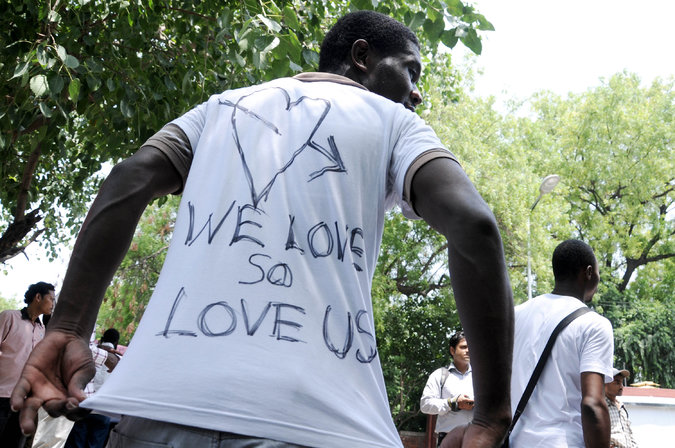 One night, a police constable rang my doorbell. “Have you seen any man from the Congo entering and leaving the building?” he asked. “African man,” he clarified. He said he had received a report that a local resident was friendly with Africans, and he wanted to know, was this true? The question surprised me; neighborhood battles here are waged over water and parking spaces, not over ethnicity. Now neighbors had become nervous of neighbors.

Once the African communities had been singled out, complaints against them bubbled up like filthy water, in Jangpura, in Khirki Extension, in the alleyways off Paharganj, anywhere in Delhi they lived.

The fragile hospitality gave way to a familiar litany of intolerance: They were too loud, exuberant and dirty; the women were loose, the men looked you directly in the eye, they were drug takers and traffickers, and worse.

Residents of Khirki Extension, whose rambling lanes had seen an influx of artists, journalists and migrants, conducted their own investigation of their African neighbors, which they called the “black beauty” sting.

Coinciding with the city’s darkening mood, the newly elected Aam Aadmi Party in Delhi started a wave of cleanups as part of its mission to control “lawlessness.” The city’s law minister, Somnath Bharti, led a raid into Khirki Extension, claiming to be acting on residents’ complaints that Nigerians and Ugandans were involved in prostitution and drug trafficking. Media reports suggest that on the night of Jan. 15, he entered Africans’ homes with a group of vigilantes, without a warrant. In the fracas, a Ugandan woman was allegedly forced to give a urine sample, on the street, in the middle of the crowd. After she filed a complaint, Delhi’s court ordered the Police Department to pursue her case against Mr. Bharti.

These recent events have awakened dormant prejudices against Africans in India, aggravated by our tendency to prize fair skin over dark. “Habshi,” derived from the word “Abyssinian,” has become a common epithet for people of African descent.

So, on one hand, the racist turn in Delhi and Goa is unsurprising. On the other hand, we have a long, and neglected, history of cross-migration with Africa. While Indians have been settling on that continent since at least the 15th century, African roots in India run even deeper. Africans were brought over in numbers around the 13th century as slaves, but also as generals, guards, merchants, bodyguards and craftsmen. Many never went back. Now tens of thousands are here to study, and others work as chefs and in the garment and textile businesses, among other industries.

Despite our close ties and the shared history of colonialism, Africa doesn’t figure on the Indian map of curiosity and desire. Our admiration of China’s economic prowess is commonplace and unabashed; we are obsessed with the West, in terms of education, ideals of beauty and economic might. But Africa is invisible. Racist views can be spouted without consequence. Africa simply doesn’t matter.

There will be few repercussions for the Aam Aadmi Party if it continues with blanket policies against Africans. The party won on the promise of change, yet here it is, proving that it shares the same blindness as other, older parties.

These days, the Afghans and Indians stroll in my neighborhood park, enjoying the winter breeze. The Ghanaian and Cameroonian families moved away when their landlords doubled the rent only for them; the young Nigerian women left after one police visit too many.

Delhi’s residents say that the city belongs to everybody, because it belongs to nobody. As Bangalore and Mumbai became insular possessions, with political parties often driving out anyone who was from elsewhere, the capital claimed that it had room for all kinds of migrants, expats and outsiders. If the Aam Aadmi Party continues the divisiveness that older parties have excelled at, we’ll soon find reasons to go after all the people who live differently from “us,” who don’t belong here, who should go back to the places they came from.

Nilanjana S. Roy is an essayist and critic, and author of the novel “The Wildings.”