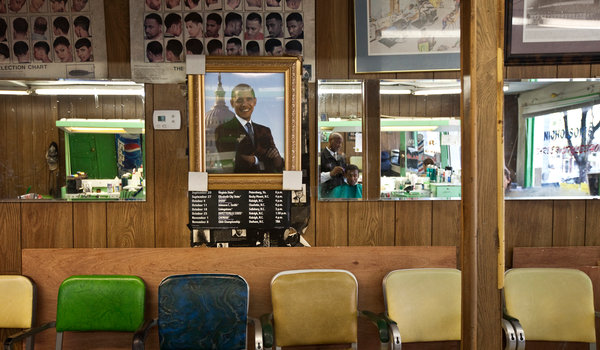 RALEIGH, N.C. — Dexter Hady, a black landscaper here, is exactly the kind of Obama supporter who could have slipped through the cracks this year. He recently moved and, not being as excited about the coming election as he was about the 2008 campaign, neglected to update his voter registration.

By chance, a volunteer for the Obama campaign stopped Mr. Hady outside of the Wake County Courthouse here recently and asked him if he was prepared to vote. Mr. Hady said no, and went on to explain: “I can say I was definitely more excited to vote for Obama last time. I guess part of it is that history has already been made.”

For the Obama campaign, it is almost impossible to overstate the importance of winning over people like Mr. Hady again in North Carolina, which has the largest percentage of black voters of any of the swing states — especially after President Obama’s performance in the first debate, which was widely seen as lackluster. In 2008, a strong black turnout that voted almost exclusively for Mr. Obama was credited with helping to win North Carolina for the Democrats for the first time in decades, contributing to his ultimate victory.

For that to happen again, Mr. Obama would need a near repeat of black voter behavior in Raleigh and across the state. But times have changed. Enthusiasm is down, unemployment is up. And some socially conservative black ministers in North Carolina, where voters passed a referendum against gay marriages and civil unions in May, remain troubled that Mr. Obama endorsed same-sex marriage this year.

“When I voted for Obama in the previous election, I did think he was closer to my values,” said the Rev. John H. Grant, 58, a black Baptist pastor in Asheville, N.C. “I’m pretty much undecided right now.” 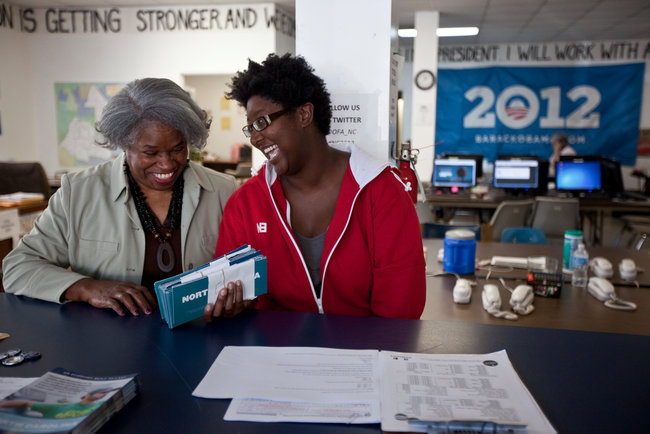 Lillie Boyd, left, a volunteer, jokes with an Obama campaign organizer at the Obama 2012 campaign office in Raleigh, N.C. on September 26.

In 2008, Mr. Obama received 95 percent of the black vote nationally, and in North Carolina, virtually every black woman who voted did so for Mr. Obama, along with 87 percent of black men, according to exit polls.

In recent national polls, Mr. Obama overwhelmingly leadsMitt Romney, the Republican challenger, among blacks. A New York Times/CBS News Poll conducted last month showed that 94 percent of likely black voters supported Mr. Obama, compared with 6 percent who said they would vote for Mr. Romney. And the intensity of support for Mr. Obama was high, with nearly nine out of 10 black voters saying they “strongly favored” him. But it remains unclear what effect recent local developments will have on black turnout here in North Carolina, where a small drop-off in the support of a core constituency could have an outsize impact.

Some black voters say they are conflicted this year.

Dawrence Hutley operates a popular lunch cart on a main thoroughfare here that is midway between the Obama campaign’s state headquarters, on one side of downtown, and its home base for volunteers, on the other.

But even though he works in the cross hairs of the Democratic effort to win this crucial swing state, Mr. Hutley, a black independent voter, is undecided between Mr. Obama, for whom he voted in 2008, and Mr. Romney.

“I like what Romney says about taxes, being a small-business owner, but I’m also middle class, so I hear what Barack Obama is saying,” Mr. Hutley, 30, said. “I want to wait until the last minute, to see what they pull out at the end.”

But other black voters — even the unenthusiastic — say there is no choice for them but Mr. Obama.

“Even if I’m not really excited, I think it’s important to vote for Obama at the end of the day because of that other guy,” Mr. Hady said of Mr. Romney. “I listen to him, so I know how out of touch he is.”

When Mr. Hady was approached outside the courthouse by an Obama campaign volunteer, he was encouraged to update his voter registration.

By the end of the conversation, Mr. Hady had committed to early voting and said he would also be happy to “spread the word” to family and friends — a perfect outcome for the campaign, which has invested much time and effort in on-the-ground operations.

In fact, the volunteer office in Raleigh from the 2008 election never closed. The ground game today represents four years of accumulated data and organizing experience.

“When you look at a state that is as close as this was, you can’t take any group for granted,” said Cameron French, press secretary for the Obama campaign in North Carolina. “We are making a concentrated effort to turn out 100 percent of the base.”

In 2008, Mr. Obama carried North Carolina by about 14,000 votes. The state’s overall importance this year was underscored by the decision of the Democratic Party to hold its nominating convention last month in Charlotte, where thousands of volunteers converged with a primary goal of registering voters. According to the campaign, workers have already collected more voter registration forms in North Carolina this year than in 2008.

Blacks make up about 22 percent of the voting population in North Carolina, and they are being heavily targeted in two places: where they go to church and where they get their hair done.

Another initiative, “Congregation Captains” is not new, but has expanded from the last election. In the program, volunteers from black religious groups are tapped to take a role in keeping their fellow members engaged. According to campaign literature, the captains serve as “local validators” of the president’s accomplishments.

“That 22 percent is going to get hit several different ways through our campaign,” Mr. French said, speaking of the black voting population.

North Carolina is not the only swing state where the black vote could be crucial. In Virginia, for instance, blacks make up 20 percent of the population, and in Florida, it is 17 percent.

For its part, the Romney campaign has not conceded that the black vote will go to Mr. Obama in North Carolina. The campaign started a state Black Leadership Council in February to serve as its “sounding and advisory board” on issues of importance to minority voters, said Tara Wall, senior communications coalition adviser for the campaign.

On the campaign Web site, a post devoted to black outreach makes Mr. Romney’s case: “President Obama simply did not get the job done — and he has particularly underserved the black community, which is suffering the most in this upside down economy.”

Some black voters interviewed for this article said they agreed that the president has not given enough attention to issues that are important to black communities, the most pressing being anti-poverty measures. But many said they also remain suspicious of Mr. Romney’s record on civil rights and diversity. As governor of Massachusetts, for instance, he eliminated the Office of Affirmative Action. Mr. Romney’s Mormon faith is also an issue. The Church of Jesus Christ of Latter-day Saints barred blacks from the priesthood until 1978.

Mr. Hutley, the undecided voter who runs food carts in Raleigh, might be leaning toward Mr. Obama. “I think, maybe, he just didn’t get a chance to do everything he wanted to do.”

And as the election nears, some black pastors who initially rejected the idea of voting for Mr. Obama again have changed their minds. The Rev. Evelyn Paulette Toliver, the minister of a black Pentecostal church in Raleigh, is one of them.

“I’d love it if, as a Christian, Mr. Obama would do everything we want him to,” she said. “But I’ve realized, thinking about it deeply, that he’s not just the president of Christians. He’s got to be the president of everybody.”