Famed for his ripped physique, rap star 50 Cent has released a diet and fitness book.
The 37-year-old, whose real name is Curtis Jackson, told the Today show that he first became obsessed with working out after he was shot nine times and ‘hurt pretty bad’ in 2000.
In his new lifestyle guide Formula 50 – which promises a transformation in just six weeks – he touts the benefits of metabolic resistance training (MRT) and a protein-rich diet. 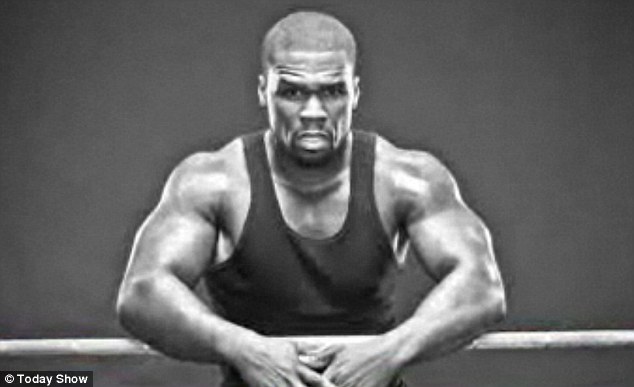 Fitness fanatic: Rap star 50 cent first became obsessed with working out after he was shot in 2000 and he has now released a book titled Formula 50 detailing how he achieved a ripped physique

In an excerpt from the tome, which he co-authored with health journalist Jeff O’Connell, he writes: ‘Follow the instructions I’m giving you here, and you’ll not only look a lot better but feel a whole lot better too.
‘You’ll be ready for whatever challenge life throws your way.’

‘You might legitimately ask, ”Who are you to preach about fitness? Aren’t you the guy who dropped joints like High All The Time?”’

The plan focuses on accelerating fat loss through short and intense workouts.
Mr Jackson devised the routines with the help of elite trainer, and founder of the Peak Performance gym chain, Joe Dowdell.
Complete meal plans for men and women are also included, courtesy of  Layne Norton, a bodybuilder with a doctorate in nutritional sciences from the University of Illinois and Stephanie Wilson, head of nutrition at IMG Academies. 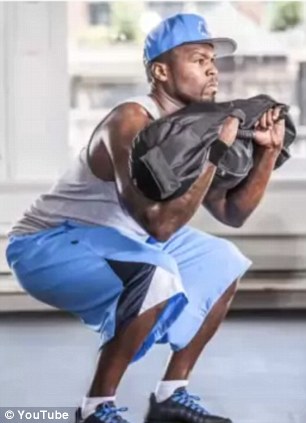 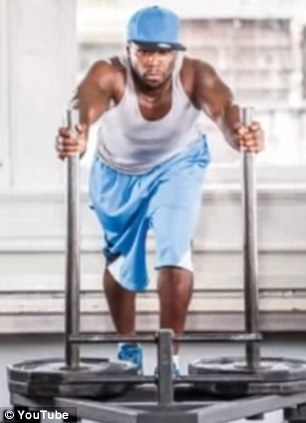 For breakfast they advice a combination of dishes, for example reduced- calorie bread with fruit spread, one ounce of Canadian bacon, two eggs sunny side up and half a cup of honeydew melon.
While lunch and dinner menus feature protein heavy staples such as cheeseburgers, Jamaican jerk chicken and beef tenderloin.
In a YouTube video promoting 50 Formula Mr Jackson states: ‘People who start diets fail because they do it like it’s a side activity. 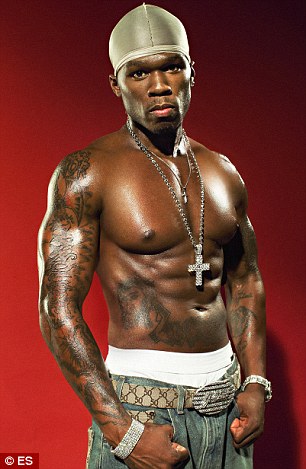 Inspired: 50 Cent pictured on his album Get Rich or Die Tryin’ – three years after he was shot in 2000

‘Next thing you know is you’re having things that take all the efforts and the time that you’ve put into the physical portion of your training right back away.
‘You just put the calories right back in you because you decide to have cupcakes. Why do you have to have cupcakes?’
The rapper shot to fame after releasing his commercial debut album, Get Rich or Die Tryin’ in 2003, which sold 872,000 copies in the first four days.
The lead single, In da Club broke a Billboard record as the most listened-to song in radio history within a week.
Despite critics deeming his rap star lifestyle as unhealthy, Mr Jackson believes he is the perfect ambassador for staying in shape.

He continues in his book: ‘You might legitimately ask, ”Who are you to preach about fitness? Aren’t you the guy who dropped joints like High All The Time?’ Hardly seems like a fitness anthem.”

‘I don’t drink and I don’t use drugs, and I didn’t back then, either. I put that joint on the first record because I saw artists consistently selling 500,000 with that content.
‘I still get a rush off money, but I now realize it can serve a higher purpose: helping others. But unless you are physically strong and mentally tough, you can’t go out and make that money to enjoy it with the ones you love, or for whatever purpose you have in mind.’
Read more: http://www.dailymail.co.uk/femail/article-2263454/Rapper-50-Cent-reveals-shot-inspired-ripped-releases-diet-fitness-book.html#ixzz2IGjig6Gq