At a recent conference on African literature in Frankfurt, I sat on a panel with two other female writers. A question was asked almost immediately: do you consider yourself an African writer? We each needed to pause before answering; we had to wait for translators to repeat the inquiry in our respective languages.
None of us spoke the same language, and none of the languages being translated from German were indigenous to the countries where we were born. Yet the question didn’t take that into consideration. It was so broad as to be disconcertingly limiting, yet it wasn’t the first time I’d heard it and it wouldn’t be the last. It seems that every new writer with any remote connection to the continent of Africa, either willingly or unwillingly, has first to wrestle with this question of identity before talking about what should matter most: their book.
The question is problematic. It assumes a static and compressed definition of Africa. But Africa is a continent of 55 recognised states, with a population of over 1 billion and more than 2,000 languages. There are so many possible responses. Answering this becomes even more complicated when the writer has lived outside her country of birth for years, or was born of immigrant parents somewhere else.
I wanted to ask: why is what I call myself important to you? I responded instead with another question: would a writer of German origin be asked this if she’d lived in America for more than 30 years? My nationality makes up as much a part of who I am as my experiences. I have made my home in America. It is where I first fell in love and had my heart broken, where I got my ego bruised and learned to stand again. It is where I met my husband and, one day, where my children will be born. But my strongest and happiest childhood memories are of Ethiopia. It is where I learned about storytelling and began to imagine my own stories. It is where my grandparents are buried and where I know my parents will be laid to rest. It is where my imagination goes when I sit down to write. It is home too. Which of these formative countries do you want me to separate myself from, and for what purpose? 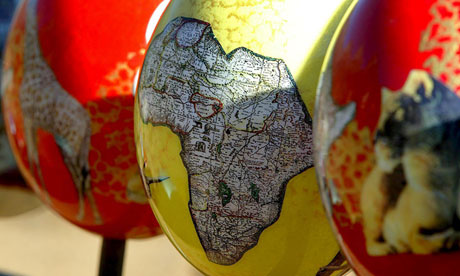 ‘The question is problematic. It assumes a static and compressed definition of Africa. But Africa is a continent of 55 recognised states, with more than 2,000 languages.’ Photograph: Nic Bothma/EPA

The winner of the 2013 Caine prize for African writing will be announced on Monday. On the shortlist of five, three writers live in the US and at least one has US citizenship. The Caine prize, some have argued, should be only for “real” African writers. But who is to judge what makes a “real African”? It is almost impossible to apply a single identity to an entire racial or ethnic group, much less to an entire continent. As individuals, we are each comprised of a series of contradictions. We are not neatly constructed sets of qualities. At our best, we should defy simple categorisation. It is living with difficult choices and easy accommodations that makes us human and, if we’re lucky, keeps us interesting. It is from within contradictory existences that some of our greatest works of literature have been born. Why can’t it be the same for those who can trace memories, or a parent or two, to Africa?
But maybe the question about “African-ness” is legitimate. Maybe it’s as simple as asking someone at a dinner party where he or she lives. It could be uncomplicated curiosity that raises this question repeatedly, compounded by the fact that in the publishing industry, “African” literature has become marketable and is selling extremely well. Maybe it’s difficult to tell us apart if the question isn’t asked. Or maybe we, the new generation of writers hailing from many places but having various forms of connection to Africa, seem so “Un-African” on the stage at festivals that our very existence forces a reconsideration of the world we live in. It calls to mind the accusations of certain African American artists not being “black enough”. Maybe we are now too much at ease in the lives we’ve made for ourselves, in the places we’ve chosen of our own accord.
Maybe this kind of cultural and geographic mobility isn’t so comfortable for others. But migration is not a recent African phenomenon. It is a human experience so old that it was recorded in image before word took precedence.
The question about an African identity implies that the differences between “home” and “destination” are so stark that living in the west should be a constant negotiation between living where one must and where one really belongs. It is as if speaking to an “African” writer who responds in fluent French, Italian, German, Dutch, Portuguese, English or any other European language, points to a contradiction.
In a 1967 interview with the Paris Review, Vladimir Nabokov, when asked whether he considered himself an American, responded: “I’m as American as April in Arizona.” The question of his identity, despite living in the US for almost 20 years, was a persistent one. His 1977 obituary in the New York Times would make reference to his claim that he was an American writer.
Today, the general public associates Nabokov not with the identity that he chose, but the one that more aptly fits our sense of who he was: a Russian writer. We have narrowed him down to a simplified tag; we’ve become comfortable with our own myopia. It’s easier than forcing ourselves to tread in the tricky waters of ambiguity and individuality. Maybe what we’re really wondering is where we will be transported when we pick up a book or a story. Maybe we’re not brave enough for the freefall before we land in new territory, guided not by standard definitions but by the evolving power of the imagination.
When the winner of the Caine prize is announced, we should focus on the ability of the story to immerse us so fully in the world that has been constructed, that it feels a bit like home.