As South Africa has grown more urban, so have poverty and hunger migrated to its cities. While the government of South Africa sees increasing penetration of supermarkets into poorer neighbourhoods as a way to encourage economic development and increase access to food, this strategy is inherently limited.
In South Africa, urbanisation has contributed to a rapid increase in poverty and a rising population of urbanites who are undernourished. Sixty percent of South Africa’s population is now urbanised, and this figure is projected to reach 80 percent by 2050. In Cape Town, a 2011 survey found that over 80 percent of households were either moderately or severely food insecure in sampled low income neighbourhoods. In addition to overall caloric food insecurity, households were found to have limited dietary diversity.
There is a deep rift in the international food policy community about the role of supermarkets in addressing urban hunger. One group sees “food deserts,” or the lack of food retailers in poorer neighbourhoods, as the primary driver of hunger and malnutrition in urban areas. Another group views the growing spread of large supermarkets in cities of the Global South with suspicion. Their primary concern is that large food retailers will displace smaller, traditional shops that better cater to the needs of the poor.
There is a parallel set of arguments in the South African policy realm which are couched in terms of economics rather than food security. Here the government implicitly assumes that the establishment of shopping malls, and associated supermarkets, in low income areas will help facilitate economic development. While food access is not explicitly considered, it is believed that supermarkets bring more efficient, cost effective and safer food to poor areas. This argument contrasts with that of those (mostly outside of government) who are concerned that the spread of big stores, including supermarkets, may lead to loss of livelihoods among small traders.

Our research revealed that neither perspective is entirely right nor wrong. In 2012-2013, we compiled one of the first, and the most complete, spatial databases of supermarket locations relative to population distribution in the Cape Town metropolitan area of South Africa. 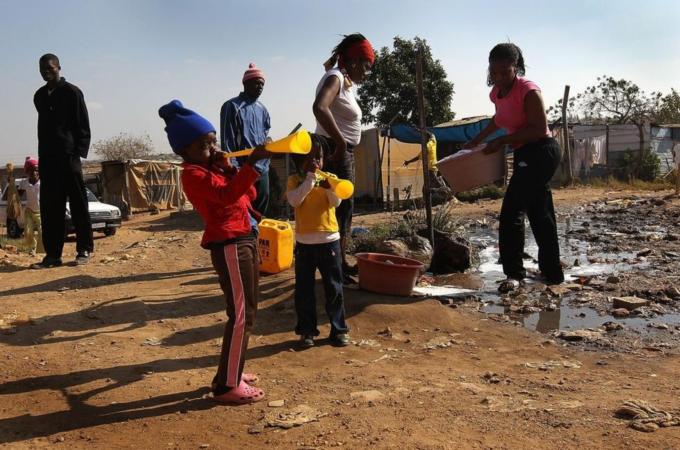 We found that supermarket density is 16 times higher in upper middle income neighbourhoods than in the poorest areas – and that the difference was even more startling if one compares the ratio of households per supermarket in a given area. That said, supermarket penetration into Cape Town’s poorest townships has deepened, and one retailer has even developed a specific brand and format (Shoprite’s Usave) to reach poorer customers.
The problem is that the supermarket model, even if it is further modified, may never really be able to reach the poorest of the poor. Such households often have irregular cash flows, meaning that they must purchase food in small quantities or buy items on credit when there is no money to be had. While small shops can meet such demands, supermarkets cannot. Furthermore, and somewhat surprisingly, we found that small shops were not charging more for the food they sold than the big retailers (even though the items they sold came in much smaller quantities).
Our research also suggests that those concerned about supermarket expansion should temper their fire. The township customers we interviewed prefer shopping in supermarkets when it is an option because they perceive the quality of goods sold there to be higher.
The small shops and meat stands located in adjacent areas also do not perceive the supermarket as competition. In fact, they see themselves as offering complementary services, almost working in tandem with supermarkets to meet a broad range of consumer needs. To be fair, however, these are the perceptions of those small traders who have survived and adapted. Other studies suggest that there has been an attrition of such small shops and stalls after big stores arrive.
The take-home message is that supermarket expansion is neither a solution to, nor a curse on, hunger alleviation efforts in urban South Africa and the region more broadly. This market-oriented solution to improving urban food access is inherently limited because it just cannot meet the needs of the poorest of the poor.
The real problems are structural in nature and are a legacy of the Apartheid era. Black South Africans continue to face significantly higher levels of unemployment than their white counterparts, and the geography of urban poverty has remained amazingly rigid. The real solution to South Africa’s urban food insecurity problem is poverty alleviation.
Poverty alleviation, however, must not solely be conceived in monetary terms. It must also be considered in terms of greater spatial equity and access to affordable healthy food. Urban food security must become an explicit policy objective of its own, rather than one embedded in an economic growth agenda.