Her body was buried sitting upright on a bed of deer antlers. 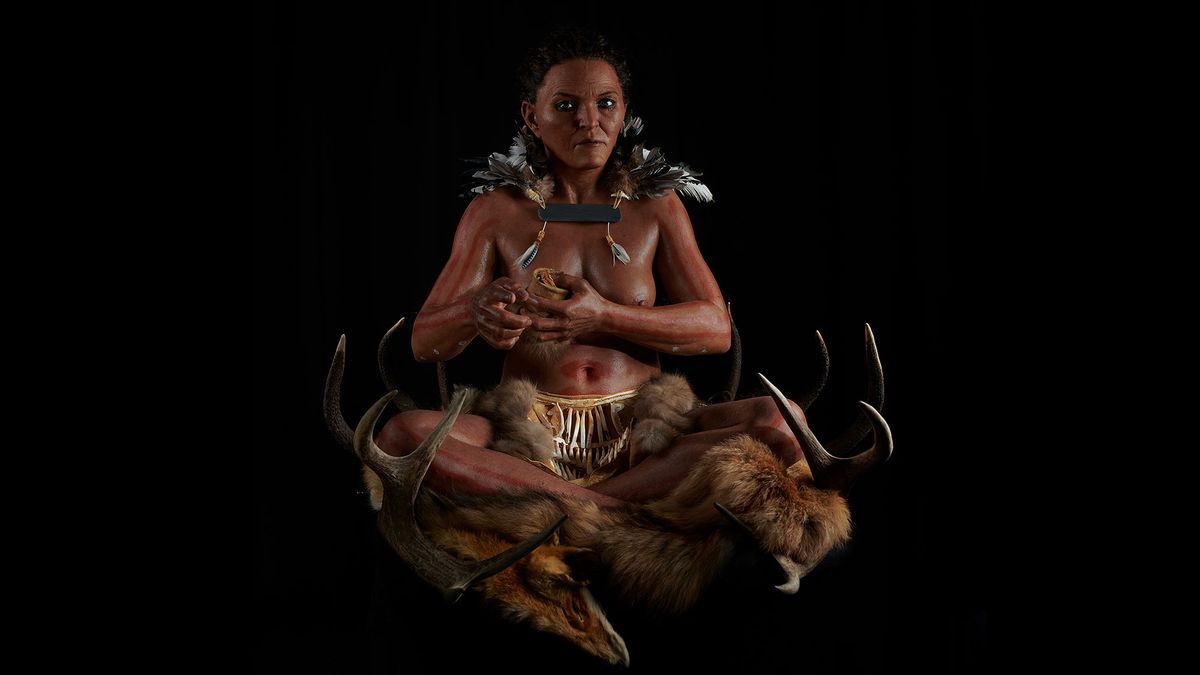 In the seated woman’s burial, she wore a short cape made of feathers, a slate necklace and a belt made of 130 animal teeth.
(Image: © Gert Germeraad/Trelleborgs Museum)

A hunter-gatherer woman who lived in what is now Sweden 7,000 years ago was recently brought to life in a remarkable reconstruction. The blue-eyed woman wears a feather cape, a slate necklace and a belt made of 130 animal teeth; her dark skin is painted with white patterns and she glowers as she sits cross-legged on a “throne” of deer antlers.

Her body was found in the 1980s, buried upright in a grave at Skateholm — an archaeological site on Sweden’s southern coast — among other burials dating from 5,500 B.C. to 4,600 B.C. National Geographic reported.

Because her corpse was so richly adorned, the woman is thought to have been a person of importance in her hunter-gatherer community, according to National Geographic. The life-size reconstruction will be revealed to the public in an exhibit opening Nov. 17 at Sweden’s Trelleborg Museum, museum representatives said in a statement.

Known as Burial XXII by archaeologists, the woman was between 30 and 40 years old when she died, and she stood about 5 feet (1.5 meters) tall. Based on DNA evidence collected from other graves at Skateholm, researchers determined that the people who lived in the region at the time had light-colored eyes and dark skin, Nat Geo reported.

During this part of the Stone Age, around 10,000 B.C. to 8,000 B.C., ancient European humans were turning to agriculture and abandoning hunter-gatherer lifestyles. Yet the Skateholm burials and other sites in Europe suggest that groups of hunter-gatherers persisted for close to 1,000 years after the rise of agriculture, according to Nat Geo.

The hands that crafted the woman’s expressive face belong to Oscar Nilsson, an archaeologist and sculptor who specializes in facial reconstructions. Working from a CT scan of her skull, Nilsson put her face together muscle by muscle, building her singular expression through layers of cartilage and soft tissue, according to the statement.

“The human face is a motif that never ceases to fascinate me: the variation of the underlying structure as well as the variety in details seem endless,” Nilsson wrote on his website. “And all the faces I reconstruct are unique. They are all individuals.”

During the reconstruction, Nilsson imagined the hunter-gatherer woman as a shaman, he told Nat Geo. Indeed, her ornate burial suggests she that held “some sort of special position in society,” but it’s impossible to say for sure what her role was, said Ingela Jacobsson, director of the Trelleborg Museum.

In any case, the result presents a vibrant and dynamic perspective of a woman who died millennia ago, the piercing directness of her gaze “almost giving us eye contact with the past,” according to the museum statement.

Queen Calafia: The Fictional Black Woman that the state of California was named after