Fifty years ago, the NAACP activist was gunned down in Jackson, Mississippi. But his work lives on to this day

On this day, 50 years ago, I was a white teenager in Jackson, Mississippi, absorbed most of the time with the typical concerns of childhood. But I vividly remember 12 June 1963, because that night my family and I heard the news that Medgar Evers, a well-known civil rights leader in our state, had been shot and killed in the driveway of his home, just a few miles from where we lived.
Evers fought in the US army in Europe during the second world war, only to return home to a state where slavery had been replaced by Jim Crow laws that institutionalized discrimination in every aspect of life. Before long, he applied unsuccessfully to become the first African American to attend the law school at Ole Miss. There, he led sit-ins and boycotts of businesses that practiced segregation – even though he knew that challenging the white power structure could cost him his life.
For many of us, white as well as black, the assassination of Medgar Evers was a turning-point. We were forced to ask ourselves with regard to the growing civil rights movement, “Where do I stand, and what am I willing to risk?”
Today, on the 50th anniversary of Evers’ death, we as a nation are confronted by the same question. Undeniably, the heroic movement that Evers and many others inspired brought an end to legal apartheid and transformed my home state and our country in important ways. 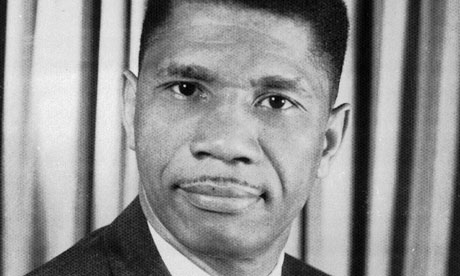 Medgar Evers, Mississippi field secretary for the NAACP, who was shot and killed in Jackson by a white segregationist, on 12 June 1963. Photograph: AP

But our work as a nation to achieve racial and economic justice is far from finished. It’s not just that voting rights are once again under attack in many states, including Mississippi. More than that, de facto segregation and discrimination continue to threaten equal access to education, affordable housing, healthcare, financial services and the job market.
The numbers are staggering. Nationally, the African-American unemployment rate is about double that of whites. On average, black and Latino families have about one-sixth the wealth of white families. Fewer than half of black males graduate from high school, and African Americans are incarcerated at nearly six times the rate of whites.
In Mississippi, the record since Medgar Evers’ death reflects both how far we have come, and how much further we have to go. We have seen enormous change and progress in the past 50 years, but Mississippi – the state with thegreatest proportion of African Americans (38%) – continues to rank worst in the nation in the percentage of children living in poverty (more than one in three). We also have the lowest per capita income in the nation, and the second-worst unemployment rate.
In fact, on almost every measure of human well-being, Mississippi’s dismal showing reflects our history of racial injustice. That is why, ten years ago – on the 40th anniversary of Evers’ death – a group of us founded the Mississippi Center for Justice and committed ourselves to the unfinished business of the movement to which Evers gave his life. We recognized that fighting injustice requires organizing and activism – but also legal support for underserved communities, a willingness to take on big fights in both the courtroom and the policy arena, and an openness to solving old problems in new ways. From the day we opened our doors, we’ve confronted the continuing racial disparities that are the legacy of slavery and Jim Crow.
One critical issue is healthcare. Mississippi has among the highest rates of hypertension, diabetes, asthma and HIV/Aids in the country, potentially deadly diseases that take an even higher toll among people of color. Inspired by Medgar Evers’ spirit, we work with African-American communities in our state organizing for access to affordable, quality health care and access to legal services for HIV/Aids patients.
When it comes to education, Mississippi ranks at or near the bottom forstudent achievement. Because the state has failed to fully fund public education (in violation of its own law), the learning environment is consistently worse in schools that primarily serve African-American students. One of today’s civil rights struggles is to ensure that all children in Mississippi and throughout the nation have access to quality schools with adequate funding.
The stakes are similarly high for Mississippians looking for fair and accessible financial services. Mississippi has the highest concentration of payday lendersper capita in the nation, with about 1,000 locations mostly concentrated in low-income neighborhoods and communities of color. Fees on these loans can add up to an interest rate topping 500%. We’re deeply engaged in efforts to reform predatory lending practices and create alternatives, prevent home foreclosures, and help students avoid exploitation by for-profit colleges that especially target young African-American women.
In the wake of disasters like Hurricane Katrina – which disproportionately affected African Americans along the Gulf coast – it is also crucial to ensure that taxpayer-funded disaster relief is fair and equitable.
Before Medgar Evers was gunned down, 50 years ago today, he told other activists worried about the safety of their leaders:

On this anniversary, our nation should pause to celebrate the courage of people like Evers who challenge injustice no matter what the odds. And we should use the occasion to rededicate ourselves to fulfill our nation’s promise of liberty and justice for all.

The Bloody Occupation of Northern Alabama during the Civil War