By DOUGLAS MARTIN     Published: June 29, 2013
Rena Price was in her kitchen in the Watts section of Los Angeles on Aug. 11, 1965, when a neighbor came to tell her that the police were arresting her 21-year-old son, Marquette Frye. She immediately raced to the corner of 116th Street and South Avalon Boulevard, her red-flowered dress billowing.

Her first reaction was to scold her son for driving while intoxicated, which a police sobriety test showed he was. He insisted he was sober, but Mrs. Price shrugged his arm away from her shoulder and said: “You’re not acting normal. You’re not acting right. Get away from me.”

Alongside them was a highway patrolman, Lee W. Minikus, who had stopped Mr. Frye for reckless driving and had, by his account, been joking with the young man when Mrs. Price arrived on the scene. He later said that “to all appearances” Mrs. Price’s words “appeared to incite Marquette to refuse to submit to physical arrest.”

Scuffling ensued, punches were thrown, and arrests were made as an increasingly restive crowd grew. Soon the tension boiled over into the neighborhood, setting off a contagion of mayhem that became known as the Watts riots — the biggest uprising by blacks in the United States since the slave revolts. “Burn, baby, burn!” was the cry of marauding bands, an exclamation mark on the race riots that had ripped through Harlem, Detroit, Newark and other places in the mid-1960s.

After six days of violence in Los Angeles, 34 people were dead and more than 1,000 were wounded. Property damage approached $100 million. 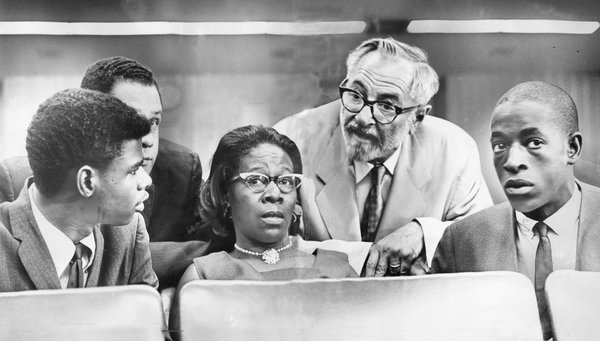 Los Angeles Times—–Rena Price with her son Marquette Frye, right, and stepson Ronald Frye at a hearing on the riots.

Mrs. Price remained in the city and died there on June 10. She was 97.

Precisely what happened at 116th Street and South Avalon Boulevard has long been debated. Versions of the episode have varied. Probably the most complete account is by Jerry Cohen and William S. Murphy, reporters whose coverage of the riots helped The Los Angeles Times win a Pulitzer Prize in 1966 and whose book that year, “Burn, Baby, Burn! The Los Angeles Race Riot, August 1965,” explored the event even further.

By their account, Mr. Frye, after his scolding, whirled from his mother and started swearing at the police, threatening to kill them. He swung at an officer trying to subdue him. As the police waited for reinforcements, an officer went to his car and got a shotgun.

Tensions escalated. Mr. Frye threw a punch at an officer, who slugged him back. A stepbrother, Ronald Frye, who had been riding in the car, also got involved in the fracas. Mrs. Price jumped on at least one officer’s back (Mr. Cohen and Mr. Murphy wrote that she had jumped on two, but accounts differ) and ripped his shirt. Meanwhile, the crowd of onlookers had grown to more than 200. They booed as Mrs. Price was handcuffed and shoved into a police car.

“Everything was going fine with the arrest until his mama got there,” Officer Minikus said in a 2005 interview with The Los Angeles Times.

Someone in the crowd spit on a police officer, and another woman was arrested. She had on the blue smock she wore as a barber, and because it was large and loose, like Mrs. Price’s dress, word spread through the crowd that two pregnant women had been roughed up and arrested. Neither, in fact, was pregnant.

Mrs. Price spent the night in jail and did not learn about the rioting until the next day.

“I was surprised,” she said in an interview with The Times in 2005. “I had never heard of a riot. There were never any riots before. I went back to my house. Where else was I going to go?”

A state commission found causes for the violence in a paucity of jobs, inadequate schools and resentment of the police. The Rev. Dr. Martin Luther King Jr., who went to Watts immediately afterward, blamed “general despair.”

Still, as an F.B.I. manual issued six months before the riot stated, “some kind of provocation” triggers mass violence. Mrs. Price was an unlikely trigger.

She was born Rena Davis on May 13, 1916, into a farming family in Oklahoma. She completed the eighth grade before marrying C. L. Price, with whom she had four children. Marquette was the fourth. Six months after his birth, in 1944, the family moved to Hanna, Wyo., where there was a mining boom.

Shortly after arriving, she and Mr. Price divorced, and she began seeing Wallace Frye, who also had four children from a previous relationship. They married, and in 1957, after the mining boom petered out, the family moved to Los Angeles.

It was a tough adjustment, Marquette Frye said in an interview for the book “Burn, Baby, Burn!” He found being in an all-black school difficult after studying with whites in Wyoming. He was repeatedly suspended for fighting and was arrested for minor thefts and a robbery.

In the book, Mrs. Price, who found work cleaning houses, said that other children picked on Marquette from the time he arrived in Watts at 13. “His temper is short — like mine — so he don’t take no pushing around,” she said.

At the time, the whole family used the name Frye, but after the riots, most of them, including Marquette, abandoned it in favor of Price, deciding that the name Frye seemed synonymous with racial turmoil, according to Mrs. Price’s son Wendell Price, who confirmed her death.

Wallace Frye died in 1978, and Mrs. Price never remarried. Marquette Frye died of pneumonia in 1986. Besides her son Wendell, Mrs. Price is survived by another son, Charles, and 19 grandchildren. Wendell Price said he did not know how many of her stepchildren were still alive.

In August 1965, Marquette Frye pleaded guilty to drunken driving, battery and malicious injury of property. His stepbrother Ronald — who was also in the car, their mother’s 1955 Buick — pleaded guilty to interfering with a police officer. Wendell Price said Ronald was still living in the Los Angeles area. Both Marquette and Ronald were sentenced to three years’ probation.

A jury found Mrs. Price guilty of interfering with a police officer, rejecting her lawyer’s argument that she had only come to the aid of her sons. A judge fined her $250 and instructed her to pay in monthly installments of $10.

“I have a reason for this,” the judge said. “On the first of every month when you have to pay $10, you will be reminded of this case.”

Mrs. Price never reclaimed her Buick. It had been impounded, and the storage fees exceeded its value.