By CHRISTINE DIMATTEI   6:00 AM  MON SEPTEMBER 30, 2013
In every major city, there’s at least one street sign that tells black folks they’re in the right place, but tells white folks that they probably took a wrong turn.
For decades in Fort Lauderdale, one of those signs has read Sistrunk Boulevard.
The boulevard, which runs through the city’s historically black business district, is currently at the center of a contentious debate between two communities.
And the dispute is raising questions about what it takes for a neighborhood with a troubled past to rehabilitate its image.
‘Negative Connotations’
Sistrunk Boulevard currently runs west from Andrews Avenue to the edge of a mostly black neighborhood. East of Andrews, however the boulevard’s name is “Northeast 6th Street,” and runs through Flagler Village, a neighborhood steadily gentrifying into a predominantly white community.
A proposal to extend the Sistrunk name east through Flagler Village to Federal Highway isn’t sitting well with many of the residents. Flagler Village resident Andrew Byer said the perception of a Sistrunk corridor implies a bad neighborhood. 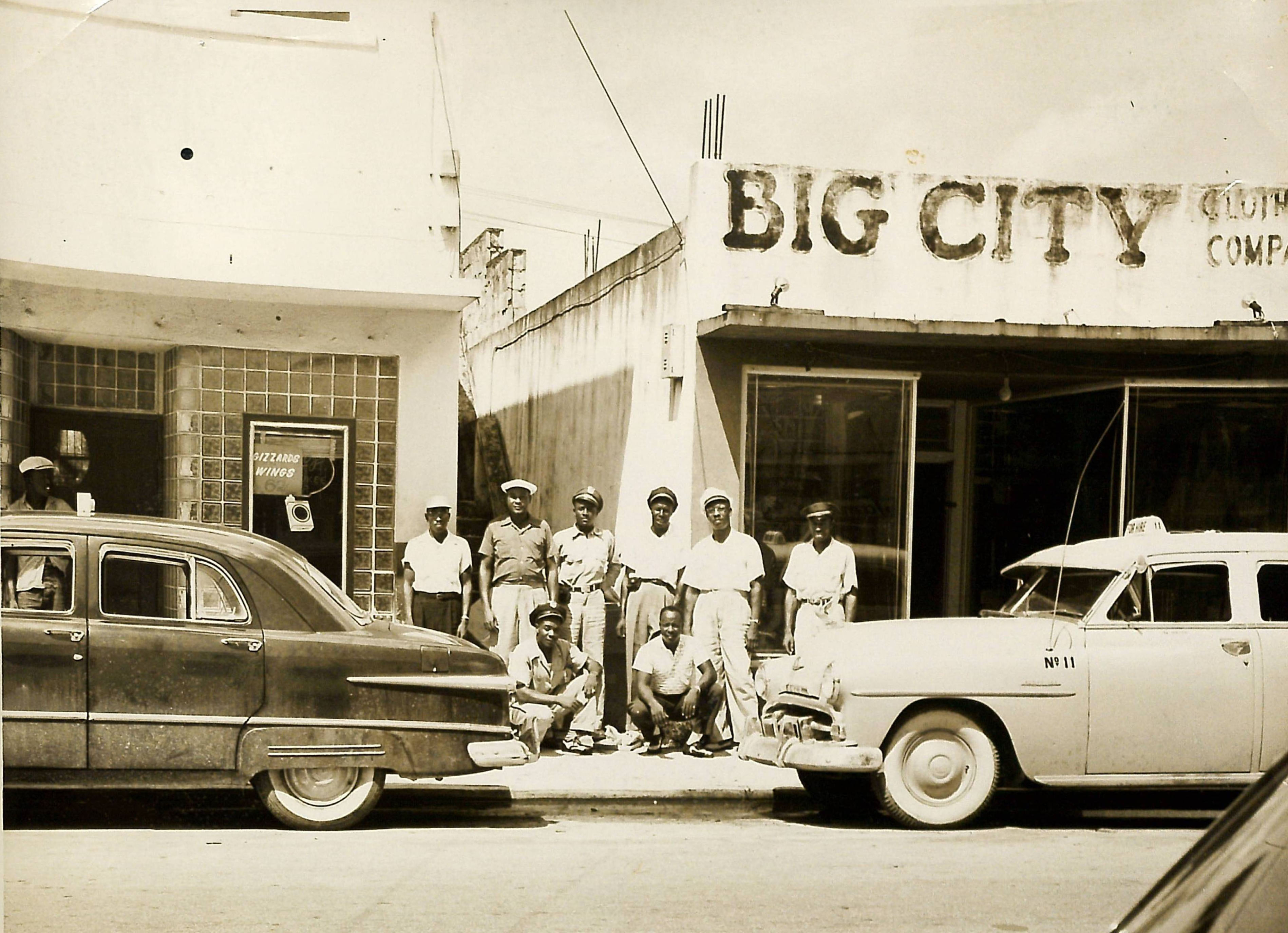 Credit African-American Research Library and Cultural Center—–African-American men gather outside a Fort Lauderdale store, circa 1940. During segregation, blacks lived west of the railroad tracks and were forbidden from crossing to the east side after dark.

“There are just certain neighborhoods people don’t want to go walk in and don’t want to be in,” he said.
Byer, 51, and his wife have been living in Flagler Village for the last two years. He said they saw the neighborhood as an up-and-coming community with great potential, both in terms of increasing property values and sheer livability.
“And those of us of who do live here and are trying to develop our neighborhood and improve it would prefer to not change the name,” said Byer.
Sixty-seven-year-old Ed Waterman owns property in Flagler Village and said that the name “Sistrunk” evokes “negative connotations.”
“It has a history of being a blighted area,” said Waterman.  “It has a history of being a focal point of crime.”
But 43-year-old Tresia Biaggi, who lives further west near the east end of the existing Sistrunk corridor, said she feels safe enough to walk her two small dogs along the strip, alone.
“That was then, this is now.  It’s changed!  Come on!,” exclaims Biaggi.  “They cleaned it up a lot,” says Biaggi.  “Now it’s livable.”
Commissioner Bobby DuBose, who represents Fort Lauderdale’s predominantly African-American District Three, said extending the Sistrunk name further east is just one step in turning the Sistrunk corridor back into a thriving business community.
“There are people who have come to me from all over the city – white, black, young, old, business people, not-for-profit – and they’ve weighed in on this.  And they’ve said, ‘Bobby, this is something we need to do.’ ”
The ‘MLK’ Stigma
The place where Sistrunk Boulevard ends and becomes “Northeast Sixth Street” lies near the traditional dividing line for many major cities — the railroad tracks.  During segregation, blacks lived west of the tracks and were forbidden from crossing over to the east side after dark.
The boulevard was named in honor of Doctor James Sistrunk, a black physician who helped establish Broward County’s first African-American hospital in 1938.
After desegregation, Sistrunk Boulevard steadily declined from the once-vibrant “Main Street’ of the city’s black community to a blighted area plagued by drugs and crime.  And in time, the “Sistrunk” name carried the same stigma as other streets found in major American cities. 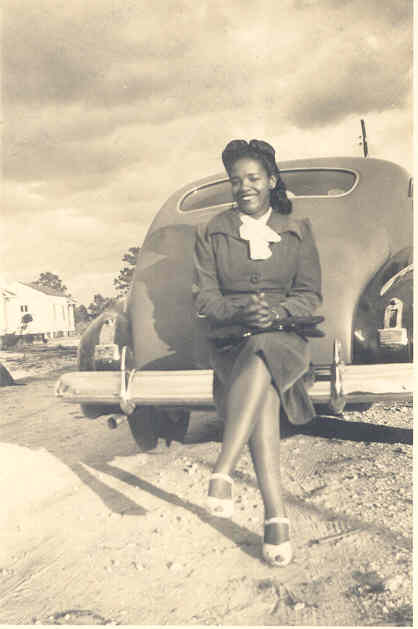 It was comedian Chris Rock who most famously gave voice to a dominant stereotype about streets named after African-American leaders:
“You know what’s so sad, man?  Martin Luther King stood for non-violence. Now what’s Martin Luther King?  A street. And I don’t give a [expletive] where you are in America, if you’re on Martin Luther King Boulevard, there’s some violence goin’ down!”
But in the debate over the future of Sistrunk Boulevard/NE 6th Street, virtually all parties seem to be gingerly side-stepping the issue of race.
Said DuBose, “I don’t want this to really become an issue of divide between one race and another race.  Because those days in Fort Lauderdale should be way behind us.”
Byer said the reasons why Sistrunk has developed a bad reputation are irrevelant.
“Whether it’s a racial thing or not – I have absolutely no idea,” said Byer.  “What I do know is that it has a negative connotation and people don’t want it.”
“This is not a racial issue,” said Commissioner Dean Trantalis, who represents Flagler Village. “This has to do with people’s association of a name with a condition.”
A New Sistrunk In The Making
But in recent years, that condition has improved greatly, thanks to a massive revitalization effort aimed at restoring the historic Sistrunk Corridor. Thanks to a $15 million infusion of city, county and federal funds, the Sistrunk Boulevard Infrastructure Project has led to more on-street parking, wider sidewalks, funky retro-style streetlights, landscape enhancements and new bus shelters.
“They’re putting up apartments and townhouses and condos,” said Biaggi.  “And they have a home for senior citizens.  And that wasn’t there before.”
DuBose said part of the Community Redevelopment Agency’s economic improvement plan included running the Sistrunk name all the way to the city’s well-traveled stretch of Federal Highway.
“Federal is a major artery within the city,” says DuBose.

Credit Fortlauderdale.gov—-In recent years, Sistrunk Boulevard has been acquiring a whole new look, thanks to a $15 million revitalization project.

Last year, street signs identifying Northeast 6th Street as Sistrunk Boulevard were put up – then quickly taken down after complaints from Flagler Village residents.  And a compromise that would have placed both street names on the signs was recently voted down by Flagler Village residents.
The matter is still being debated by the Fort Lauderdale City Commission.  But given all the opposition, Trantalis recommends tabling the matter for a few years.
“If repaving a street and adding new sidewalks and bike lanes are considered enough to rehabilitate a name, then the neighborhood will have to make that decision,” says Trantalis.
But Bobby DuBose says this is an opportunity for Fort Lauderdale to set an example for the rest of the country.
“What legacy do we want to leave for our kids, our grandkids and our great-grandkids?” asked DuBose. “And I think the extension of the name says all that.”

Journey of Reconciliation of 1947