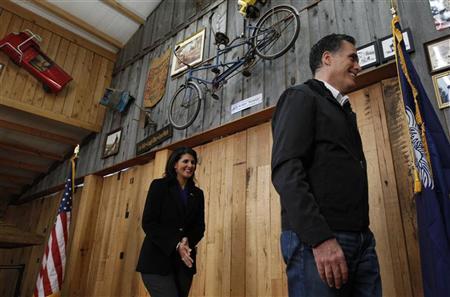 (Reuters) – Amid the flurry of campaigning before Saturday’s South Carolina Republican presidential primary, not a single candidate has shown up in Marion County, a sleepy rural stretch that represents the bottom of the U.S. economy.

Unemployment in the county stands at a staggering 17.3 percent, the highest rate in a state battered hard by the recession. Manufacturing, textile and tobacco jobs have been steadily leaving Marion for decades and now more than 2,000 of the county’s 33,000 residents are looking for work, according to the South Carolina Department of Employment and Workforce.

Marion County is located in what has become known as the “corridor of shame” – an impoverished stretch of South Carolina along Interstate 95 – and has stood still even as Republican Governor Nikki Haley aggressively lures companies to the state. Her efforts last year brought announcements of new or expanded operations in the state from Boeing, BMW and TD Banknorth.

Haley, who has endorsed Mitt Romney in the Republican presidential race, is proud of the growth. “In a nation struggling economically,” she said in a recent interview, “South Carolina is winning.”

But Marion County, which sits along the site of a proposed interstate highway, has scored few wins. Its population is stagnant in a state that has seen a 67 percent increase in population in 30 years. Without jobs, officials say, it is hard to attract new people and younger residents are anxious to flee.

Rodney Berry, mayor of the town of Marion and executive director of business development in the county, says two things hold the county back. Roads need work, something residents feel acutely when they travel to more prosperous neighboring counties, and the county has built its hopes around completion of the new interstate highway.

It also suffers from the perception that the available workforce is uneducated. Thirteen percent of residents have bachelor’s degrees, little more than half the average in South Carolina statewide.

“Plain and simple,” Berry said. “A lot of people need some help.”

Politically, Marion County has long been a Democratic Party stronghold in a Republican state. It is majority African-American and in 2008 its voters solidly backed Barack Obama. They are poised to back Obama’s re-election.

Obama visited the county in 2007 and raised its problems as a campaign issue. Republican Newt Gingrich picked up the theme, referring to the “corridor of shame” in campaign appearances and criticizing the Obama administration’s outreach to low-income communities.

But none of the Republican contenders ventured into Marion when they gathered 50 miles away in the popular tourist town of Myrtle Beach for a Monday debate. Myrtle Beach is in Horry County, which has fared much better in the tough economy. Marion County’s other neighbor, Florence, last year saw major manufacturing companies arrive, including the job-listing site Monster.Com, food-maker Heinz, and car-maker Honda.

“You’d think we’d be primed for great growth,” Berry said. “But we are so different than the two big counties we are nestled between. We do think often that we are the forgotten people.”

Adding to the pain, Marion County is about to lose its influential Democratic congressman, James Clyburn, through redistricting. A Republican may take the seat, leading Berry to worry that his county will be even more forgotten.

Rita Hennecey, who has lived here since 1953, watches the slow pace of progress with her friends from a table at Dry Dock, a popular gathering place along Highway 76.

“Marion used be known as a pretty little city on the way to the beach,” she said after church one recent Sunday. “You would never have dreamed it would be this way.”

Hennecey and her friends can recount the town’s history, its namesake Revolutionary General Francis Marion, known as the “Swamp Fox,” and the tobacco farms and textile plants that once supported a thriving economy.

But they can just as easily recall the names of the now-gone companies that once made candy, clothes and Coke bottles. When Russell Stover, the area’s largest employer, left town in 2000, nearly 1,200 jobs went with it. That story has been repeated over and over. In May, car-parts manufacturer Inteva closed its plant, putting 42 people out of work.

“It used to be busy on Main Street,” said Lucia Atkinson, who has lived in the area for more than 70 years. Her husband was mayor for 18 years. “It was filled with four or five groceries and four filling stations. They sold ladies dresses and furniture.”

Today, a quarter of the stores on Main Street are vacant.

As mayor, Berry finds himself fielding phone calls from residents who need help with electric bills or organizing collections to put chicken, grits, and rice onto families’ tables. More than a quarter of the people live below the poverty line.

“When you hear the news every month, Marion County is the highest unemployment,” Berry said. “Emotionally, it takes a toll on folks. It’s become engrained in our minds to some degree … It just starts to permeate your mind and body that maybe we can’t.”

But he and others try to be optimistic. Over the years, folks here have faced and conquered adversity many times before.

“We are very resilient people,” he said.