THOMAS B. EDSALL January 23, 2013, 9:53 pm
By THOMAS B. EDSALL
If the Republican Party were a profit-seeking corporation, the current management would be tossed.
A post-election study conducted Dec. 12 by Resurgent Republic, a conservative think tank, concluded that the market for right-wing ideologues is just not there anymore:

Republicans have run out of persuadable white voters. For the fifth time in the past six presidential elections, Republicans lost the popular vote. Trying to win a national election by gaining a larger and larger share of a smaller and smaller portion of the electorate is a losing political proposition.

Stan Greenberg, a Democratic pollster, released findings on Jan. 16 from a Democracy Corp survey that echoed that conclusion:

The Republican Party brand has steeply eroded since Election Day. Half of all voters (51 percent) now give the Party a negative rating and a third rate the party very negatively (under 25 on our 100-point scale).

Even more threatening to conservatives, according to Greenberg, “Strong majorities of voters view the Republican Party’s positions on critical economic and social issues as extreme.”
If you’re a Republican, the evidence on the party’s near-term prospects is pretty grim: 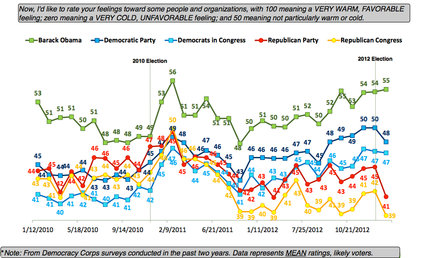 On a host of issues, the Republican Party is perceived as out of the mainstream: 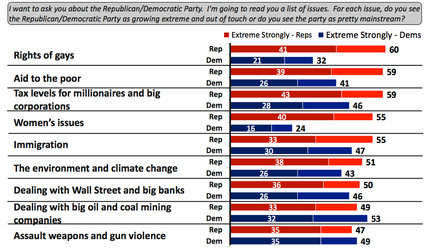 Republicans traditionally defer to rank, but in 2016 the party will need a presidential candidate who understands his (or her) party’s ideological and demographic liabilities and can pull it out of a nosedive — no small task. The last candidate to manage this feat? Bill Clinton.
An item that should go on the top of the priority list: dump the party’s super PACs and the men and women who run them, including Karl Rove.
The monied wing of the Republican Party suffers from what political scientists call a “resource curse” — the same “paradox of plenty” that blocks the advancement of oil-rich countries in the Middle East and elsewhere. Too much cash flowing from big donors to super PACs and tax-exempt organizations is the Republican curse.
In the 2012 election, major Republican-leaning independent expenditure committees, including Restore Our Future and American Crossroads, spent $579 million, more than three times the $168 million spent by pro-Democratic groups like Priorities USA and the Service Employees International Union.
Despite losing, a network of favored Republican consultants and contractors emerged from the election richer than before: Mentzer Media Services, Inc. collected fees of $141 million; Crossroads Media LLC, $90.8 million; Target Enterprises, $15.2 million; Arena Communications, $12.8 million. For the Republican operatives running these companies, 2012 was hardly a defeat. It was a business bonanza.
William Kristol, the editor of The Weekly Standard, wasn’t happyafter last year’s presidential election and not just because of the results:

Reading about some conservative organizations and Republican campaigns these days, one is reminded of Eric Hoffer’s remark, “Every great cause begins as a movement, becomes a business, and eventually degenerates into a racket.” It may be that major parts of American conservatism have become such a racket that a kind of refounding of the movement as a cause is necessary. A reinvigoration of the Republican Party also seems desirable, based on a new generation of leaders, perhaps coming ​— ​as did Ike and Reagan​ — ​from outside the normal channels.

Three presidential campaigns earlier, Kristol and David Brooks (who was then a senior editor for The Weekly Standard) were convinced that the McCain 2000 campaign for president offered a “refounding.” Kristol and Brooks wrote:

The two great Republican general-election victories of the recent past grew out of intraparty insurrections. In 1980, Ronald Reagan, fresh from challenging a sitting Republican president in 1976, ran against a party establishment represented in various ways by Howard Baker, George Bush, and John Connally. A decade later, Newt Gingrich led an insurrection, first against the Bush budget deal and then against Bob Michel and the Republican congressional establishment, which culminated in the Republican landslide of 1994. Now we are witnessing a third insurrection. John McCain is taking on the Republican establishment. In New Hampshire, he crushed it.

In practice, the McCain insurgency in 2000 was short-lived, posing a serious threat to George W. Bush for less than three weeks — from the New Hampshire primary on Feb. 1, 2000, to the South Carolina contest on Feb. 19. The brief life of the McCain campaign suggests that future reform efforts will face intense hostility.
I asked Larry Sabato of the University of Virginia how parties can change direction after defeat. Sabato responded by e-mail:

The hardest thing for a party to do is to make painful choices that require a break-up within the old coalition in order to create a new, more competitive coalition. Usually, only repeated losses —being hit over the head with a two-by-four — will motivate a party to try something truly different.

After the disastrous 1964 presidential bid of Barry Goldwater, Sabato pointed out, Richard Nixon and others

grasped that the old moderate-liberal Republican establishment was history. J.F.K. and L.B.J. had converted African-Americans almost wholly, and white liberals too, with the New Frontier-Great Society and civil rights. What was left? Homeless Southern conservatives, who gravitated toward the G.O.P. and pushed out of power the congressional and gubernatorial moderates. The liberal G.O.P. wing had to die to make way for a much larger trove of conservative Southern votes.

At the moment, reactionary forces have a death grip on the Republican Party, and their power has been cemented by the party’sinstitutionalization of closed primaries and caucuses (neither independents nor Democrats can participate) in more than half the states.
Republican opponents of change also hold on to the hope that the American economy will be mired in a period of slow growth, damaging to whichever party is in power. The premise of this strategy is that hard-pressed voters will turn on the Democrats.
The rate of growth since the 2007-8 collapse has been about half the average rate in past post-recession periods. Take a look at this chartfrom the Congressional Budget Office:

Still, for Republicans to gamble on a listless economy is inherently risky. Jan Hatzius, chief economist for global investment research at Goldman Sachs, argues that in economic terms, “2013 might feel a little friendlier than 2012,” picking up steam after the Obama administration and Congress resolve their fiscal and budgetary disputes.
Favorable reports on housing and employment last week boosted the stock market as well as Obama’s approval ratings, which on Jan. 17 stood at 52 percent, among his highest since early 2009.
The major factor encouraging Republican inertia is that the party’s setbacks have not reached the crisis stage; it still controls the House233 to 200 (there are two current vacancies).
That majority rests on the weak reed of gerrymandering, however, and on the high concentration of Democratic voters in urban areas. Democratic House candidates actually won the popular vote by one million more votes than Republicans, 56 million to 55 million.
In North Carolina, Bloomberg news found that Democrats won 2.22 million votes to 2.14 million cast for Republican candidates, but Republicans won 9 of the state’s 13 House seats. Similarly, in Pennsylvania, Democrats won 2.7 million votes to the Republicans’ 2.6 million, but Democrats ended up with only 5 of the state’s 18 districts.
The fast-approaching budget and sequestration fights have created a dilemma for Republican House leaders. If the party backs its conservative wing and allows the country to go into default later this year or submits to the draconian cuts mandated by sequestration, Republicans in swing districts could turn the House over to Democrats in 2014. If Republicans go in the opposite direction and compromise, significant numbers of House members will face primary challenges from the right.
With more and more Republicans aware that their party is on the ropes, how will its core constituencies respond, especially the Christian right and the Tea Party, which appear likely to lose power in an intra-party realignment? Will they passively accept diminished influence or will they lash out against their fellow Republicans?
If the conservative movement continues on its downward trajectory, the American business community, which has the most to lose from Republican failure, will be the key force arguing for moderation.
The problem that faces business leaders pressing for reform is not just the normal reluctance of a political party to change. Instead, it is the fact that much of the Republican electorate, as presently constructed, is profoundly committed — morally and ideologically — to “traditional values.” You’re asking groups of people to change who were brought together by their resistance to change. Their opposition to change is why they are Republicans.
The right coalition includes a subset of conservatives determined to preserve white hegemony. Add to that social conservatives who oppose both the women’s rights and gay rights movements, and the religiously observant who are dead set against burgeoning secularism and what they see as the erosion of faith in public life.
These voters see the breakneck speed with which big business alters familiar patterns of life — innovation, but also joblessness, foreclosure and broken communities — as laying waste to much they hold dear. Business — that is, capitalism — drives a “perennial gale of creative destruction,” as the economist Joseph Schumpeter famously put it. This gale, by definition, is anti-conservative.
Survey data reveals the profound resistance on the right to cultural disruption. Poll after poll shows that Republicans believe politicians should stand firmly against compromising core principles, by much higher margins than either Democrats or independents.
An indirect but important reflection of partisan attitudes to change is visible in the higher percentage of Republicans, 58 percent, who believe in creationism – defined in this survey as the belief that God created human beings in their present form within the last 10,000 years – than Democrats, 41 percent, and independents, 39 percent.
In effect, for many cultural and social conservatives, being a Republican is not just an allegiance to one of two major political parties but a deeply held belief system, an ideology with a strong religious core.
The Tea Party and the Christian Coalition exist in an inevitably fraught alliance with high finance, the Chamber of Commerce and the Business Roundtable.
The center-right coalition, in fact, needs more than new management. Over time, its leadership and candidates face the task of breaking up irreconcilable factions and merging the most viable parts with new constituencies, including suburbanites angry over rising tax burdens and increasingly affluent Hispanic and Asian voters.
Charles Stewart III, a political scientist at M.I.T. who studies the evolution of American parties, responded by email to my query about partisan restructuring. Republicans, he said,

need to figure out what the settled parts of American politics are these days — settled matters that they, in their heart of hearts would like to change, but which they agree not to change. That probably includes a much more tolerant society and a dedication to a certain level of social insurance as an obligation embraced by the federal government. The Tea Party leaders won’t be able to do that, unless they change their spots thoroughly.

The success of the Republican Party in rural areas, exurbs and in the South has come at a cost. Socially conservative voters will resist changing their spots. When, and if, Republican leaders determine that the demands of these voters for “massive resistance” to abortion, contraception and immigration are futile, they will have to decide whether to cut them loose. No matter what happens, social conservatives are unlikely to become Democrats. It may not be too long before they find themselves with a choice of their own: withdraw from party politics or hold their noses and stick with the Republicans.