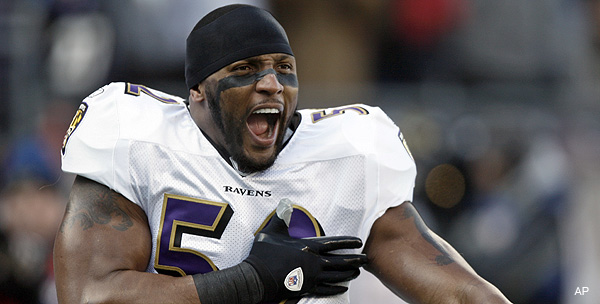 So … remember when Ray Lewis insisted that the longer the lockout went on, the more crime there would be? Turns out, there’s no historical precedent for such a statement, according to the Atlanta Journal-Constitution’s PolitiFact group.

In a recent ESPN interview, Lewis said that “if we don’t have a season — watch how much evil, which we call crime, watch how much crime picks up, if you take away our game.” Lewis’ contention was that the lockout affected the fans as much or more than the players and owners.

The AJC accepted Lewis’ invitation to do that research, contacted the Northeastern’s Sport in Society center and was told that “there is very little evidence supporting Lewis’ claim that crime will increase the longer the work stoppage lasts.”

The Baltimore Sun also looked at crime in 1982 and found an increase during the strike in only one category: homicides.

The Sun tried some other methods to tackle Lewis’ claim. The newspaper’s Crime Beat blog looked at crime data last season when the Ravens had their bye (off) week. The Sun found there was slightly more crime during the bye week.

The Sun looked at crime in Baltimore the four weeks before the season started and the first four weeks of the season. There was the same number of crimes. The Sun also examined the crime rate there at the end of the Ravens’ season and what happened afterward. What did it find? There was less crime after the season ended in early January.

The Sun stressed several times that its findings were unscientific.

The AJC then went to look at increases in crime during bye weeks, assuming that the no football/higher crime equation would fit a much shorter time frame. No real evidence was presented that would lead in one direction or another.

One criminologist we interviewed had a different take. Northeastern University professor James A. Fox heard Lewis’ comments and did a study. He looked at key FBI data from the last three years available, 2006 through 2008, focusing on the week before the Super Bowl because there were no games that week and there was intense interest in football around that time of the year. Fox, who was referred to us by the FBI, found no increase in crime the week there was no football.

“I took the Ray Lewis(notes) challenge and I don’t see any evidence of [a crime increase],” said Fox, the author of several books on crime who also writes a crime and punishment blog for the Boston Globe.

As far as player crime … well, aside from Kenny Britt(notes) and the Tampa Bay Buccaneers, there hasn’t been a huge increase during this offseason, and the closer both sides get to a settlement, the more most players will be putting their collective noses to the grindstone, leaving them too busy to get in trouble.

At least, that’s one theory we hope will stick.