By MARK PRIGG
PUBLISHED: 18:14 EST, 16 April 2013 | UPDATED: 01:40 EST, 17 April 2013
A ‘hobbit’ that lived on a remote Indonesian island thousands of years ago may have evolved from the first human species to walk fully upright, according to new research.

It had a brain smaller than an orange measuring 426 cubic centimetres (cc) – about a third that of a modern human’s – inside a grapefruit-sized skull.

Dubbed the ‘hobbit’ after the tiny creatures from the Lord of the Rings books, it grew no larger than a three-year-old child today and would have weighed about 55 pounds (25 kilos). 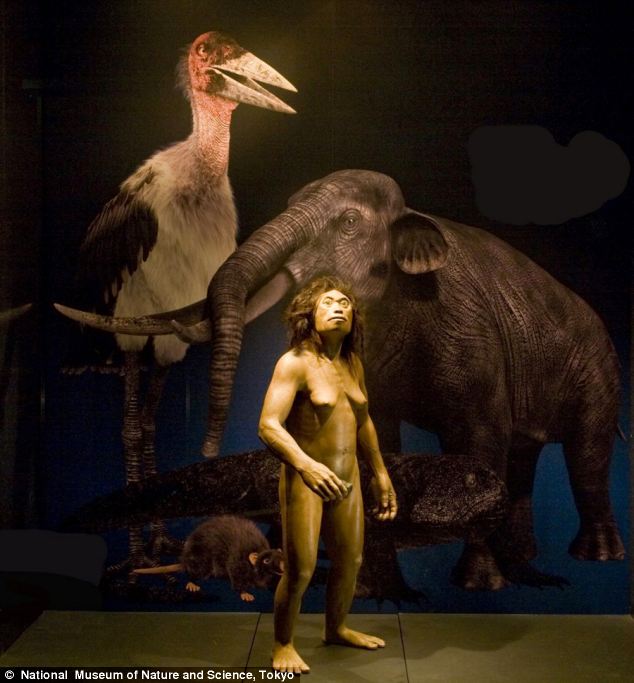 Homo floresiensis had a brain smaller than an orange measuring 426 cubic centimetres (cc) – about a third that of a modern human’s – inside a grapefruit-sized skull, researchers have found

They lived with pygmy elephants and Komodo dragons on Flores, east of Bali and midway between Asia and Australia.

The miniature human species, now known scientifically as Homo floresiensis, hit the headlines almost a decade ago when their bones were unearthed in a cave on the island.

Scientists have been puzzled ever since by how big its brain would have been – and state of the art scanners have now shown it was slightly larger than previously believed.

The study, published in Proceedings of the Royal Society B, also drew up a new evolutionary model that suggests Homo floresiensis was a dwarf version of Homo erectus.

This species was the first early human to walk on two legs and evolved almost two million years ago in Africa.

The researchers believe it got to Flores from the nearby island of Java.

Archaeological records show they spread across Asia over an area ranging from Turkey to China.
They were slightly bigger and more powerful than us (Homo sapiens), but their brains were not as complex. 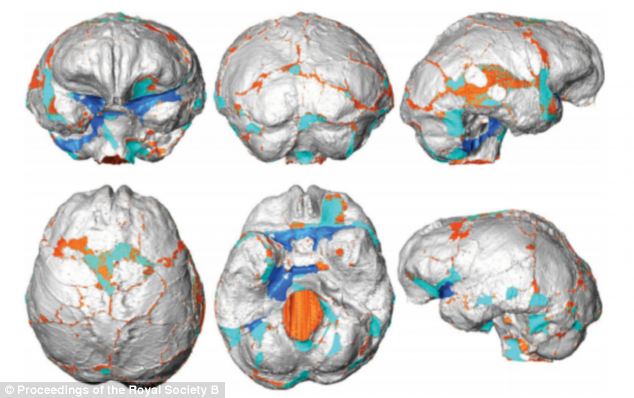 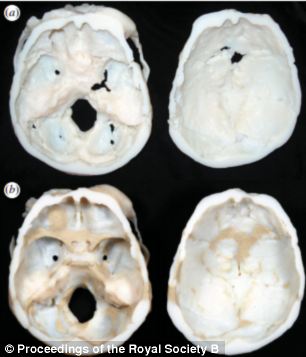 Dr Yousuke Kaifu, of the National Museum of Nature and Science in Tokyo, said: ‘The new model shows that, contrary to expectations by some researchers, it is possible that large bodied Javanese Homo erectus migrated to the solitary island and evolved into Homo floresiensis by marked island dwarfism.’

He added: ‘Evolution of the genus Homo is characterised by increases in brain and body sizes, but Homo floresiensis suggests these human’ characters can be substantially flexible.

‘These may have evolved to the opposite direction in some specal circumstances.’
The brain was the tiniest of any member of the genus Homo, small even for a chimpanzee.

But despite giant lizards and storks inhabiting the island, there were no maneaters which may have meant the tiny creatures did not need a large brain for survival. 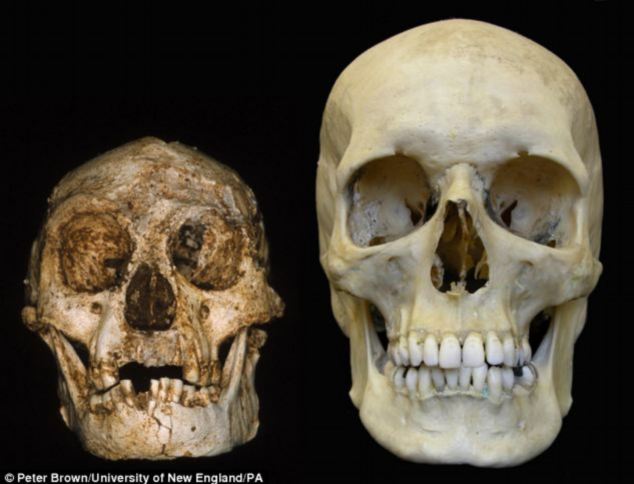 The scarce food resources on a small island turn a large, calorie hungry body into a liability.

On mainland Asia, stegodonts sometimes grew bigger than African elephants, but on Flores they were just a bit bigger than present-day water buffalo.

A 220 mile-long (354 kilometre) island, Flores was never connected by land bridges to either Asia or Australia.

Even at times of low sea level, hopping over would have involved crossings of up to 15 miles (24 kilometer, possibly in primitive boats or rafts.

Before modern humans began ferrying animals such as monkeys, pigs, and dogs to the island about 4,000 years ago, the only land mammals to reach it were stegodonts, extinct elephant ancestors, and rodents – the former by swimming and the latter by hitching a ride on flotsam.

Homo erectus lived on nearby Java at least 1.5 million years ago, so it somehow crossed the sea to Flores.

Near the spot where archaeologists found almost a complete skeleton of a female Homo floresiensis that lived on the island 18,000 years ago.

It included the top of a skull, the jaw, pelvis and a set of leg bones.

They also unearthed flaked stone points among the remains of a stegodont which could weigh 800 pounds (400 kilograms).

The points probably served as spearheads, indicating these diminutive early ancestors were both sophisticated toolmakers and savvy hunters of big game.

In spite of their reduced brains, the little people apparently had sophisticated technology.

The fireplaces, charred bones, and thousands of stone tools found among their remains must have been their handiwork.

The researchers estimate the tiny people lived on Flores from about 95,000 years ago until at least 13,000 years ago.
Read more: http://www.dailymail.co.uk/sciencetech/article-2310027/Inside-head-hobbit-human-Researchers-Homo-floresiensis-orange-sized-brain.html#ixzz2QmRys5f4