Chimpanzees pass down a ‘secret handshake’ through the generations, according to a new study.

Researchers found that troops of chimps pass on traditions, including the handshake, from one generation to the next – and they differ from group to group.

When chimps are cleaning, they adopt a ‘grooming handclasp’ – two chimps clasp onto each other’s arms, raise them in the air and groom each other with their free hand. 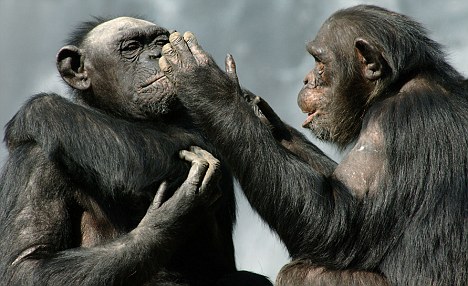 German researchers found chimpanzee families have their own unique hand clasp, passed down from generation to generation.

Previous research suggest this handclasp may be a cultural phenomenon – like how people greet each other – but only some chimpanzee colonies practise this grooming behaviour.

Researchers looked at chimps on the Chimfunshi Wildlife Orphanage Trust in Zambia – finding some prefer to clasp hands, while others clutch onto another chimp’s wrist.

Edwin van Leeuwen, of the Max Planck Institute, said: ‘We don’t know what mechanisms account for these differences.

‘But our study at least reveals that these chimpanzee communities formed and maintained their own local grooming traditions over the last five years.

‘Our observations may also indicate that chimpanzees can overcome their innate predispositions, potentially allowing them to manipulate their environment based on social constructs rather than on mere instincts.’

Observations also revealed grooming behaviours are transmitted to the next generation of potential handclaspers – showing the chimps learn from one another. 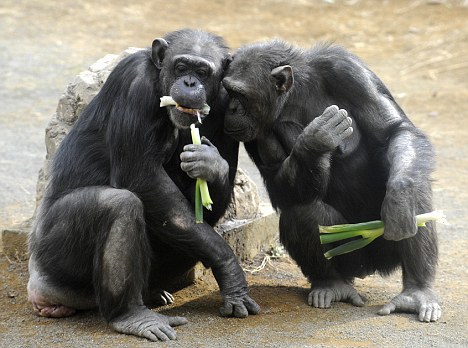 Researchers found some chimpanzees prefer to clasp hands, while others clasp wrists

Mark Bodamer, of Gonzaga University, said: ‘By following the chimpanzees over time, we were able to show that 20 young chimpanzees gradually developed the handclasp behaviour over the course of the five-year study.

‘The first handclasps by young individuals were mostly in partnership with their mothers.

‘These observations support the conclusion that these chimpanzees socially learn their local tradition, and that this might be evidence of social culture.

‘Continued monitoring of these groups of chimpanzees will shed light on the question of how these group-traditions are maintained over time and potentially even why the chimpanzees like to raise their arms up in the air during social grooming in the first place.’