Researchers say we owe our grins to this prehistoric fish which roamed the oceans over 400million years ago.

It may not have the prettiest grin ever seen but it could be the most significant. 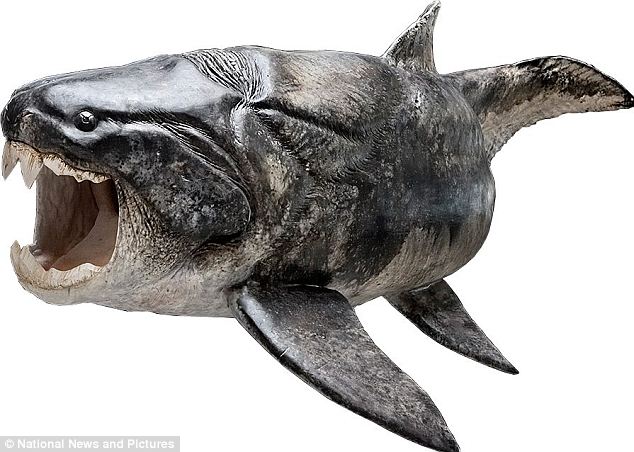 What a grim grin: The gruesome gnashers of the Compagopiscis suggests humans may have developed working teeth and jaws much earlier than previously suspected

The gruesome gnashers of the Compagopiscis suggests humans may have developed working teeth and jaws much earlier than previously suspected.

A 380million-year-old fossil of the fish, found in Australia, was examined under the latest high energy X rays to create a 3D image of what it would have looked like.

And by recreating the structure and development of its mouth, a joint British, Swiss and Australian research team discovered it had both jaws and teeth.

It means that humans may have evolved quicker too. It was previously thought that they had scissor like jaws to rip the flesh off animals and evolved proper teeth later.

But if a species from which mankind evolved had developed such a sophisticated system for chewing and eating millions of years earlier then it is likely the first vertebrates did too.

Placodermi is an extinct class of armoured prehistoric fish, known from fossils, which lived from the late Silurian to the end of the Devonian Period.

Their head and thorax were covered by articulated armoured plates and the rest of the body was scaled or naked, depending on the species.

Placoderms were among the first jawed fish; their jaws likely evolved from the first of their gill arches.

It was believed teeth and jaws together only evolved later in all vertebrates several million years after the existence of the Compagopiscis, a small fish with plated, armour-like skin.

Paleontologists from the Univeristy of Bristol, London’s Natural History Museum and Curtin University, Australia, worked with Swiss physicists, they reported to the journal Nature.

They used the latest high energy imaging equipment at the Paul Scherrer Institut in Switzerland to work out how the creature – called a placoderm – would have looked.

Martin Ruecklin, from Bristol said: ‘We were able to visualise every tissue, cell and growth line within the bony jaws, allowing us to study the development of jaws and teeth.’

Professor Philip Donoghue, also from Bristol, added: ‘This is solid evidence for the presence of teeth in these first jawed vertebrates and solves the debate on the origin of teeth.’

Co-author Zerina Johanson from the Natural History Museum said: ‘These wonderfully preserved fossils from Australia yield many secrets of our evolutionary ancestry.’