Archaeologists investigating the mystery of two perfectly preserved 3,000-year-old skeletons on a remote Scottish island believe they may have been made up of several different people.

The skeletons excavated in Cladh Hallan are said to be the first evidence that Britons preserved their dead using mummification.

But the identities of the oldest mummies ever found in Britain remain shrouded in mystery as scientists have gruesomely discovered they were made from body parts of several different people. 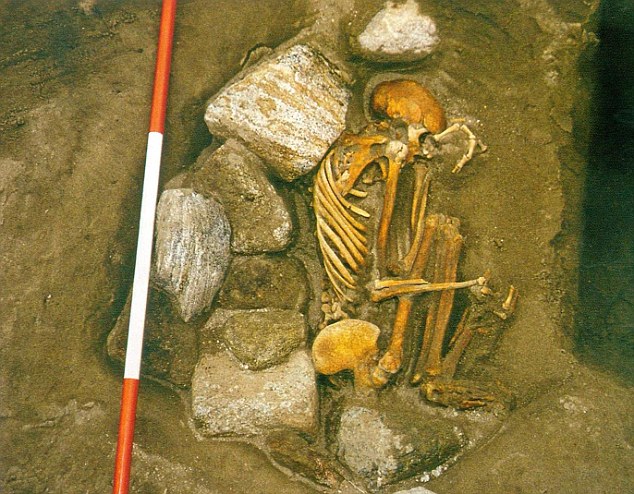 A study using the latest technology has suggested the remains are made up of six different people, who died several hundred years apart.

Research last year had suggested that the mummies were made up of parts from people in the same families and then put together like a jigsaw to make it look like they were just one person.

recent DNA tests on the remains carried out by the University of Manchester, show that the ‘female burial’, previously identified as such because of the pelvis of the skeleton, was in fact a composite.

It was made up of three different people, and some parts, such as the skull, were male.

Radiocarbon dating and stable isotope analysis showed that the male mummy was also a composite.

The Cladh Hallan mummies had been carefully placed in the crouch burial position, a style of burial where the body is drawn up into the foetal position, commonly found in the Bronze Age.

But Archaeologists were puzzled by how the bodies were contorted into such tight positions, and this discovery has proved their cynicism. 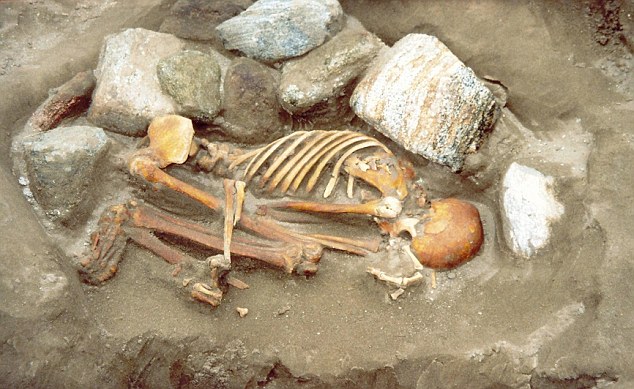 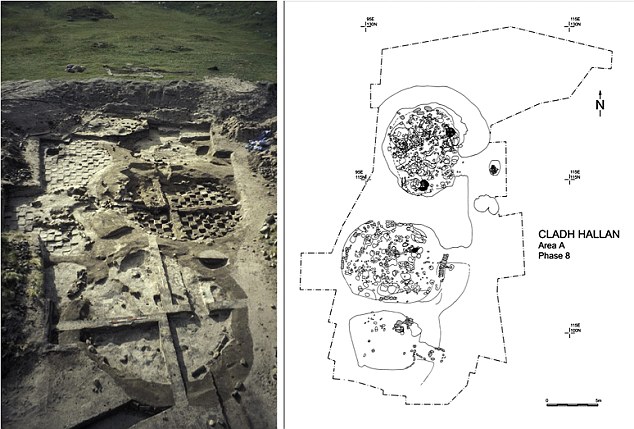 Pre-historic: A diagram shows Cladh Hallan, where the two 3,000-year-old skeletons were found

Sheffield University Professor Mike Parker Pearson said the mummies had not been buried straight after preservation and are similar to those found in distant Peru in South America.

‘These could be kinship components, they are putting lineages together, the mixing up of different people’s body parts seems to be a deliberate act,’ he said.

‘I don’t believe these mummies were buried immediately, but played an active part in society, as they do in some tribal societies in other parts of the world.’

As part of ancestral worship, the mummies probably would have been asked for spiritual advice to help the community make decisions.

Archaeologists found the mummies in the foundations of a row of unusual Bronze Age terraced roundhouses. 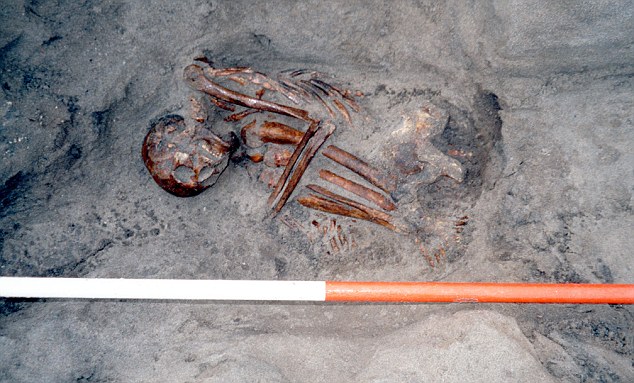 Known as the mummies of Cladh Hallan, they formed part of the most remarkable Bronze Age discovery in Britain in 2001

But after being radiocarbon dated, all were found to have died between 300 and 500 years before the houses were built, meaning they had been kept above ground for some time by their descendants.

Further tests showed that the bones had become demineralised, a process caused by placing a body in an acidic environment like a peat bog.

The degree of demineralisation on the bones found showed that after death, the bodies had been placed in bogs for about a year to mummify them before being recovered.

The results of the DNA work on the Cladh Hallan mummies will feature on the latest series of Digging For Britain on BBC Two in September.

The complex where they were found was made up of seven houses arranged as a terrace. 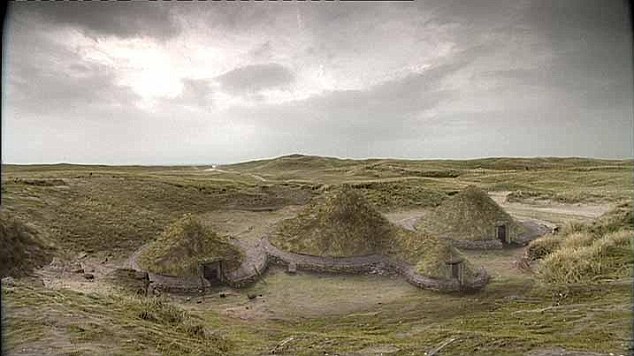 Home: The bodies were buried under a terrace of prehistoric houses, believed to look like this, and could be up to 3,500 years old

The archaeologists have so far excavated three of them – and the dig has revealed that the structures were used not just as dwellings but also as places of ritual activity.

When the complex was constructed in around 1,000 BC, the two by then rather ancient mummies, along with the body of an entire sheep – possibly a sacrifice – were buried under the floor of the most northerly house.

At around the same time an unmummified 13-year-old girl who had recently died was buried under the floor of the middle house.

Underneath the southernmost of the three excavated structures, a three month old child was also interred around 1,000 BC.

In around 900 BC a baby was buried in the north house and the building was again moved and rebuilt – this time two metres further west.

But, for the time being, the discovery of Britain’s first mummies should start to redefine key aspects of life and death in prehistoric Britain.’

The DNA Change That Accounts For White Skin

Will the US Really Experience a Violent Upheaval in 2020?