March 1, 2013, 8:30 pm
By STEPHEN KANTROWITZ
When recruiting began in February 1863 for the 54th Massachusetts – one of the first regiments in the Union Army composed of Northern free blacks–many Bostonians expected Robert Morris to be among its strongest boosters. A key figure in the city’s black leadership, Morris had spent much of the previous decade demanding a place for his black military company in the Massachusetts Volunteer Militia. He passionately believed that the spectacle of black men arrayed in the state’s uniforms, marching in disciplined ranks, would force a change in how most whites perceived them, replacing inchoate fears of slave rebellion with admiration for the newest members of the citizen-soldiery.
But Morris’s devotion to the ideal of military service was less ardent than his commitment to an overriding principle: black participation in public life must take place on terms of perfect equality. The first black lawyer to try a case in Massachusetts, Morris served as co-counsel to the white abolitionist Charles Sumner in the 1849 school-desegregation case that put forward the principle of “equality before the law.” When that suit failed, Morris helped organize blockades of the city’s segregated black primary school, preferring to see it shuttered than to allow Jim Crow education to continue. He also took part as the city’s black men threw themselves into antislavery party politics, yielding alliances with whites that finally brought school desegregation in 1855.
Around the same time, he began organizing a black military company which he hoped would some day become part of the Massachusetts Volunteer Militia. During the 1850s, Morris devoted a great deal of time and energy to his “Massasoit Guards.” He repeatedly headed petition drives asking the state to embrace the company, but he made demands as well: not only would the state have to sanction the company’s activities, which had been the case for black militias in a few other Northern cities, but the legislature would have to strike the word “white” from the state’s militia law.
Morris asked too much. Federal militia law, not just Massachusetts state law, specified that only white men could serve. Beyond this, the enlistment of a black company would outrage many whites, in the North as well as the South, who had been raised to see black men under arms as threats to good order, not as its defenders. Not surprisingly, white politicians – even in the comparatively friendly environment of 1850s Massachusetts – generally refused to take the steps Morris demanded. As a result, Morris’s men never donned their uniforms, and the Massasoit Guards dissolved in acrimony. Instead, another group of black men, who called themselves the “Liberty Guard,” and whose leaders did not insist on full recognition, became the first to march through Boston’s streets in 1857. 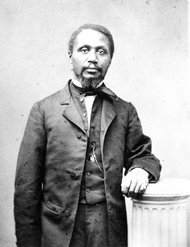 When the Civil War began, Morris renewed his campaign for black military service. But while declaring himself “ready to defend the flag of the common country against the common foe,” he added a crucial qualification. He believed black men should volunteer only “when the removal of disabilities allowed them to do so on terms of equality.” The word “white” would still have to go.
In 1861, both the offer and the threat passed largely unnoticed. Massachusetts refused the services of a prospective home guard of black men, joining a national consensus that the Civil War, like American citizenship, was to be the province of white men.
Less than two years later, however, the Emancipation Proclamation opened a path to black military service. By February 1863, the War Department charged Massachusetts’s abolitionist governor, John Andrew, with organizing the first black Northern regiment.
Morris seized the moment to demand equal service. Equal pay was not at issue: all believed — incorrectly, as it turned out — that the War Department would pay black soldiers the same wages as white. Morris’s demand was, instead, that black regiments include black commissioned officers. In early February he called upon Andrew, bringing with him another pioneering black professional, the European-trained physician Dr. John V. DeGrasse. Within days the governor had telegraphed Senator Charles Sumner, pleading for his help in getting the War Department to allow the appointment of black commissioned officers. Morris and DeGrasse may even have put their own names forward in pressing the case for equality, for Andrew wrote that “an interdict including member Mass. Med. Soc. speaking four languages, and member Suffolk bar, is prejudicial.”
The War Department would not bend. So at a Feb. 16, 1863 recruitment meeting, Morris reiterated the position he had taken in 1861: black men should refuse to serve until they could do so on terms of perfect equality. Others, including the famously uncompromising white abolitionist Wendell Phillips, this time urged black men to take half a loaf — to seize the opportunity offered them, despite its limitations. But Morris declared it black men’s duty to “go right” — to serve only once they could be officers, and the state struck the word “white” from its militia law. Morris’s colleague William Wells Brown offered the simplest form of the same prescription: “Equality first, guns afterward.”
The bitter words of black and white recruiters tell us that Morris and his allies did their work well that winter and spring. Morris’s longtime colleague William Nell publicly lamented that “owing to a combination wholly unexpected and never to be too much regretted, numbers of young men were induced to refrain from enlisting in the 54th, and thus lost the golden privilege of having their names enrolled in the first colored regiment from the North.” Robert Gould Shaw, the commander of the 54th, put it more bluntly. “The influential colored men of Boston,” he complained, “have done us more harm” than good. Morris’s protégé Edwin Garrison Walker even claimed that opposition to recruitment brought Morris to the verge of being arrested and imprisoned.
Of course, many black activists did support enlistment. Leading black Bostonians like Nell, the former fugitive Lewis Hayden and Rev. Leonard Grimes threw themselves into the work. Recruiters fanned out across the North and Canada, and the training camp at Readville swelled with volunteers. On May 28, the 54th marched through Boston at full strength, numbering over 1,000 men and officers.
But where Boston itself was concerned, this initial phase of recruiting was a dismal failure. During the 1850s nearly 100 of the city’s men had proclaimed their desire to serve in a black militia unit. In 1861, 125 had stepped forward in a single evening to volunteer for the proposed home guard. But after months of recruiting in the winter and spring of 1863 – including countless pro-enlistment meetings, the placement of a recruiting office in the city’s most heavily black neighborhood, and the earnest entreaties of prominent white and black activists — the harvest was meager: of the more than 1,000 black men in uniform who sailed south that spring, fewer than 40 listed Boston as their place of residence.
The 54th’s celebrated battles, especially its brave, doomed assault on South Carolina’s Fort Wagner that July, changed many minds. Over the next months and years enlistment surged in Boston and beyond. By war’s end an astonishing 71 percent of the eligible black men in the nonslave states had entered military service.
Black soldiery, we are often told, sowed the seeds of equal citizenship. Abraham Lincoln famously suggested, as early as March 1864, that such “gallant” service seemed to entitle at least “some of the colored people” to the full rights of citizenship; by the last week of his life he made this case in public. The linkage between military service and equality seemed to grow stronger with each passing month.
Yet that linkage was not forged only in the heat of battle. It was also forged in the struggles over recruitment, equal pay and black commissioned officers. These struggles challenged white Americans to understand black enlistment in the Union military not as an unthinking or inevitable response to Lincoln’s invitation, but as a self-conscious moral and political act. By insisting on complete equality as a bedrock principle, these rebels and dissenters helped policy makers and citizens throughout the Union see African-Americans in the terms Morris had long dreamed of: not just as men willing to don a uniform, but as fellow citizens, cognizant of their rights and determined to secure them.
Morris, nearly 40 years old when recruitment began, never took up arms. He returned to his legal practice, and to dreams of a career as a local politician. But he nevertheless played an important role in African-Americans’ Civil War — not in the battle to defeat the Confederacy, but in the battle to transform the American republic into a place where black people could fully belong.