Zimbabwe is one of the poorest country’s on Earth, but clearly despot Robert Mugabe doesn’t seem to care on his 89th birthday.

The president celebrated it by immortalising himself in freshly minted gold coins and held a lavish party with a giant cake.
Guests, including his wife, first lady Grace, tucked into the four-tier treat made in his honour at the state house before he gave a thank-you speech. 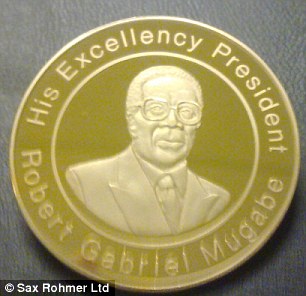 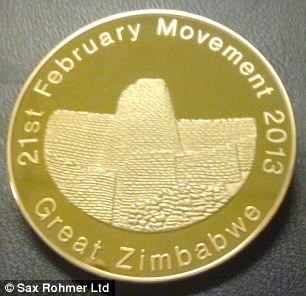 Minted: Zimbabwe dictator Robert Mugabe had the coins made to celebrate his 89th birthday

The celebration came amid accusations that Mugabe is losing his grip on a country he has ruled since coming to power in 1980 and resorting to violence.

His party are suspected of being involved in the death of the 12-year-old son of a local official who is supporter of the opposition Movement for Democratic Change (MDC).

Christpowers Maisiri was burned to death while sleeping in a hut with his brothers last weekend in Headlands district, 110 miles east of Harare. 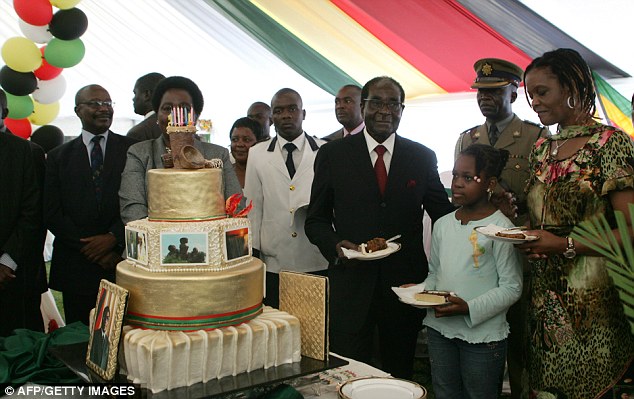 Birthday boy: Robert Mugabe celebrates with his wife Grace, right, as they have a slice from the four-tier cake at the party in Harare

Tsvangirai and Mugabe were forced into a power-sharing government in 2009 and will resume their rivalry in elections expected around July.
The MDC quickly blamed Mugabe’s ZANU-PF party, saying the alleged killers were after the boy’s father, Shepherd.

ZANU-PF denied killing the boy and accused the MDC of trying to fan pre-election tensions in the southern African state. 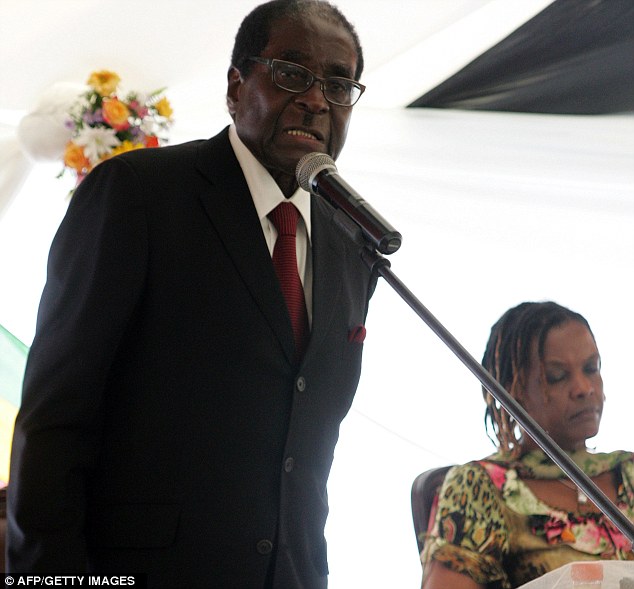 Thank-you: Mugabe makes a speech at the party to celebrate his birthday

“ZANU-PF is under siege, ‘Tsvangirai said while addressing mourners and supporters attending the burial in Headlands, a tobacco-growing district.
‘They are in a corner and this is a desperate act from a party that is losing power.’
Fighting back tears, Shepherd Maisiri said he had been subjected to violence and intimidation from ZANU-PF supporters since 2000. His son had been born in the bush because his parents had to flee from opponents, he said.
Tsvangirai said he had shown Mugabe pictures of the charred remains of the boy during a cabinet meeting on Tuesday and that the president had ‘shrunk’ in disbelief and ordered a full investigation.
Tsvangirai, former trade union leader was forced to quit a presidential run-off race in 2008 after 200 of his supporters died in political violence blamed on ZANU-PF members.
‘We are hurt but not intimidated. This has to end, starting with the arrest of the people who committed this heinous crime,’ said Tsvangirai.

He said he could not vouch for Mugabe’s sincerity when calling for peaceful elections.
Read more: http://www.dailymail.co.uk/news/article-2286993/A-22-carat-dictator-Robert-Mugabe-gold-coins-minted-commemorate-89th-birthday.html#ixzz2MQOZxLWi