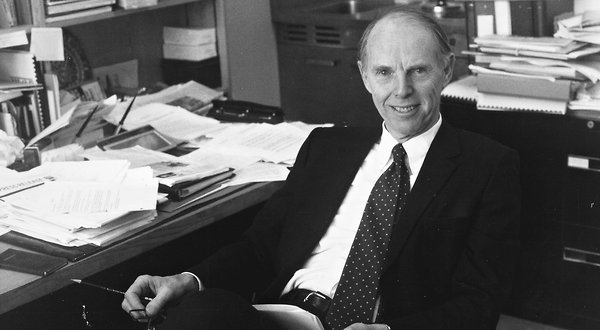 Prof. Roger D. Fisher often told his students, “Peace is not a piece of paper, but a way of dealing with conflict when it arises.”

Roger D. Fisher, a Harvard law professor who was a co-author of the 1981 best seller “Getting to Yes: Negotiating Agreement Without Giving In” and whose expertise in resolving conflicts led to a role in drafting the Camp David accords between Egypt and Israel and in ending apartheid in South Africa, died on Saturday in Hanover, N.H. He was 90.

The cause was complications of dementia, his son Elliott said.

Over his career, Professor Fisher eagerly brought his optimistic can-do brand of problem solving to a broad array of conflicts across the globe, from the hostage crisis in Iran to the civil war in El Salvador. His emphasis was always on addressing the mutual interests of the disputing parties instead of what separated them. As he would tell his students, “Peace is not a piece of paper, but a way of dealing with conflict when it arises.”

It did not matter to Professor Fisher whether the warring parties reached out to him or not; he would assume they needed his help. “Most of the time he was not invited. He would invite himself,” Elliott Fisher said. “Our sense growing up was that he would read the newspaper and think, ‘Oh, shoot, there is something to fix.’ ”

For example, when a rebel group took hostages at the Japanese Embassy in Lima, Peru, in 1997, his son recalled, Professor Fisher found a way to contact the president of Peru, Alberto Fujimori, and gave him suggestions for how to dampen the sense of crisis, including restoration of the power and water in the embassy. This strategy won the freedom of the majority of the hostages. In the end, however, Peruvian forces stormed the embassy, killing all 14 of the rebels and rescuing all but one of the 72 remaining hostages.

Professor Fisher is credited with helping initiate the summit meeting between the Soviet leader Mikhail S. Gorbachev and President Ronald Reagan in 1985, convincing Reagan staff members that just meeting to brainstorm and build relations was more important than settling a specific agenda.

In 1979, Secretary of State Cyrus R. Vance went to Professor Fisher’s house on Martha’s Vineyard before the meeting at Camp David that would lead to a peace agreement between Egypt and Israel. Professor Fisher suggested to Mr. Vance the “single negotiating text” method that was used to bring the parties together, said Bruce M. Patton, who wrote “Getting to Yes” with Professor Fisher and worked on many diplomatic projects with him. The strategy involved having President Jimmy Carter alone be responsible for writing solutions and letting the other leaders shape the treaty through a back-and-forth critiquing process.

In 1991 in South Africa, Professor Fisher and former students led workshops with both the Afrikaner cabinet and the African National Congress negotiating committee leading into talks to end apartheid and to establish a new constitution.

His upbeat approach to some of the world’s most intractable problems led some critics to assert that he was unrealistic. But Mr. Patton said Professor Fisher recognized and relished the “complexity and irrationality” of the situations he addressed.

Although Professor Fisher mostly worked behind the scenes, he did create and moderate a series on public television called “The Advocates.” A court-style program that took on one policy issue at a time and examined it in detail from different perspectives, it ran for several years on PBS and won a Peabody Award.

“Getting to Yes,” which he wrote with Mr. Patton and William Ury, has sold millions of copies and been translated into 36 languages, and has been used by leaders in business and government. Professor Fisher also wrote other books and co-founded the Harvard Negotiation Project, which teaches conflict resolution skills to students and to international parties in the midst of a dispute.

Roger Dummer Fisher was born May 28, 1922, in Winnetka, Ill. His mother, Katharine Dummer Fisher, had relatives who had ridden the law circuit with Abraham Lincoln; his father, William T. Fisher, a lawyer, was the son of Walter L. Fisher, secretary of the interior in the Taft administration.

On the eve of World War II, Professor Fisher attended Harvard University. Upon graduating he volunteered for the Army, where he served from 1942 to 1946 doing weather reconnaissance in both the North Atlantic and Pacific theaters. Four of his eight college roommates died in combat; that, as well as seeing the aftermath of battle, persuaded him to dedicate his life to helping avoid war.

After graduating from Harvard Law School in 1948, he served on the Marshall Plan staff and as assistant to the solicitor general in the Eisenhower administration before joining the Harvard law faculty in 1960.

In addition to his son Elliott, Professor Fisher is survived by another son, Peter; two brothers, John and Frank; and five grandchildren. His wife of 62 years, the former Caroline Speer, died two years ago.

Professor Fisher stayed active in advising diplomats until about seven years ago, when illness made him too weak. His constant advocacy was a force many of his friends found comforting.

His family recalled that when Professor Fisher celebrated his 80th birthday, his colleague John Kenneth Galbraith toasted him by saying, “Whenever I thought, ‘Someone should do something about this,’ it eased my conscience to learn that Roger was already working on it.”