By CAMPBELL ROBERTSON
Published: February 20, 2013
NEW ORLEANS — Errol Joseph has the doorknobs. He has the doors, too, as well as a bathtub and a couple of sinks, stacks of drywall, a hot water heater, pipes, an air-conditioner compressor, and big pink rolls of insulation. They are sitting in a shed.
A few blocks up the street sits the gaunt frame of a house, the skeleton in which all these insides are supposed to fit. They have sat apart for years. The gap between: permits, procedures, policies, rules and the capricious demands of bureaucracy.
As people in the Northeast set off on the road back from Hurricane Sandy, there are those here, like Mr. Joseph, who are keen to offer warnings that recovery can be far more difficult than they imagine. Mr. Joseph sees his own story as a cautionary tale, though he admits he is unsure what he would have, or should have, done differently. 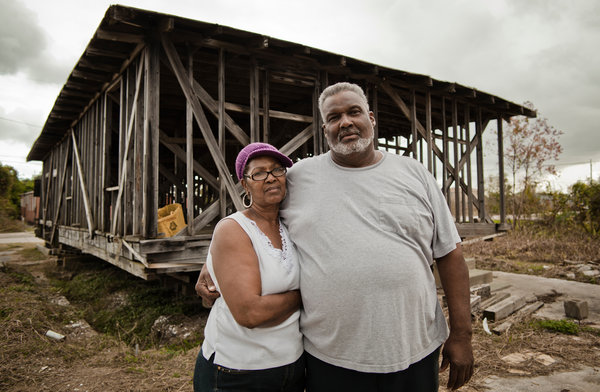 Errol Joseph and his wife, Esther, at their Forstall Street property in New Orleans. Mr. Joseph, 62, had spent his life fixing houses.

“Do the right thing and fall further behind,” said Mr. Joseph, a big man with a soft voice.
Four-fifths underwater just seven and a half years ago, New Orleans is, for the most part, in extraordinarily good shape: the airport has gotten a long overdue renovation, restaurants and music clubs are booming, new schools and libraries are opening, and an orchard of cranes marks a rising medical complex. On some measurements, the city is doing far better than it was before Hurricane Katrina.
But making it through that recovery was for many a daily trial, grueling, exasperating and slow. Some gave up and never returned. Some, like Mr. Joseph, are still muddling through.
Begin with the hurricane and the levee failures. The nine-room house that Mr. Joseph’s father had built on Forstall Street, that Mr. Joseph had lived in for most of his 62 years, was flooded.
It had taken in water after Hurricane Betsy in 1965, but the family was back at home within three months. Mr. Joseph thought it would be the same in 2005, perhaps quicker because he was insured. He kept up payments on a home-equity loan, he said, while he and his wife and a crowd of relatives squeezed into a daughter’s house in Baton Rouge. 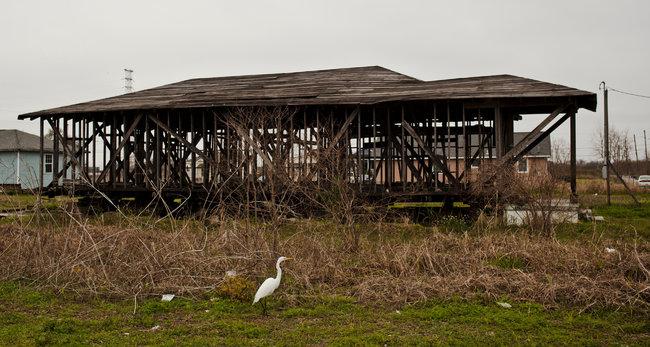 But first came urban planning. In those early months, rebuilding commissions considered plans in which certain neighborhoods of New Orleans would revert to green space, including Mr. Joseph’s block in the downriver corner of the city known as the Lower Ninth Ward. His mortgage lender demanded the immediate repayment of his loan plus an early-payoff penalty. His entire flood insurance settlement went to that.
Eventually, residents were allowed to return. Mr. Joseph gutted his house and spent several years trying to prove to the city that it was salvageable. In early 2009, he was granted a reconstruction permit.
By that time, Mr. Joseph had received $26,000 from another insurer and a $55,000 rebuilding grant from the Road Home, the federally financed program to help returning homeowners. He also received a $30,000 grant to begin the work of elevating his home above flood level. All of this was roughly $90,000 short of damage costs. (It would be another year before a federal judge ruled that the Road Home grant calculations most likely discriminated against black residents, prompting the state to adjust its formula.) 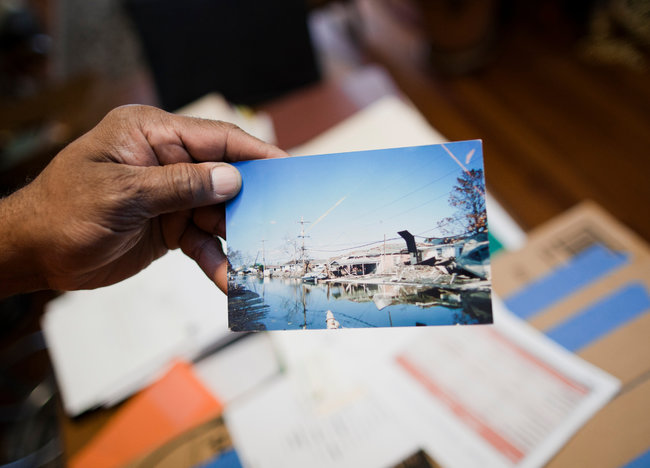 A photograph of Mr. Joseph’s block taken shortly after Hurricane Katrina. It took years to prove his house was salvageable.

But Mr. Joseph, who had spent his life repairing houses, figured he could do it himself, and would be back at home by that summer. He spent most of his rebuilding grant buying materials, including windows, shingles and everything else in the shed. In the spring of 2009, he elevated the frame of the house, leaving it propped on wooden cribbing.
Before he took any further steps, he contacted the state for an inspection, as he had been instructed.
Then the inspectors showed up.
“ ‘Do not do anything to this house until you get a letter of continuance,’ ” he recalled one inspector saying. “He said that three times. He said you would lose your money.”
So Mr. Joseph did not do anything to the house. Months went by. No letter arrived. The inspector disappeared. Officials denied that anyone had ever said anything about a letter, said Mr. Joseph, who in his regular visits to state offices would then ask for written permission to move forward anyway.
In 2010, told that he would not be allowed to do the work himself, he drew up a contract with an elevation specialist. But permission from the state to move forward was still elusive. “Your paperwork is in the system,” Mr. Joseph was told.
Though Mr. Joseph did not know it, his paperwork was blocked for months in the federal clearance process, but for reasons that remain a mystery. 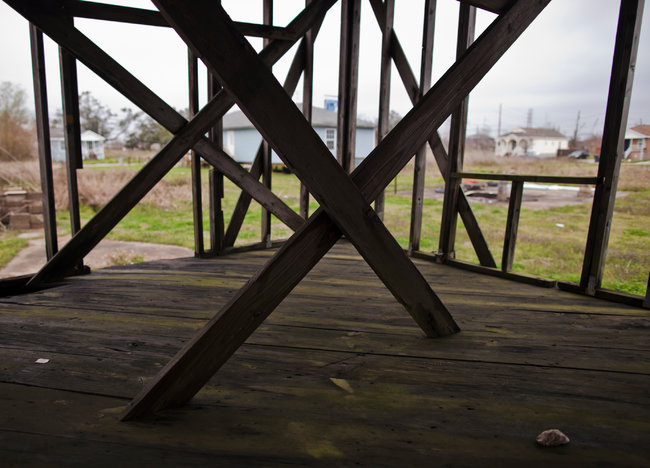 A view from inside Mr. Joseph’s home. He had insurance, but finds himself in worse shape than residents who did not.

The drywall rotted in the shed. The frame sat in the elements. The city, unaware of Mr. Joseph’s travails, warned of demolition.
Meanwhile, Mr. Joseph watched as people who had never had flood insurance, or who had waited longer to rebuild, moved into their repaired elevated homes. He and his wife began renting a house in another part of town, homeowners turned itinerants, their savings sloughing off in $1,000 monthly increments.
In 2011, a state official concluded definitively that the inspector had been wrong. Mr. Joseph could officially move forward on rebuilding. But first, he was told out of the blue, he had to pay the state $40,000.
The Road Home had accidentally overpaid him by that amount, he was informed. Mr. Joseph did not have that money. Another year passed. In 2012, the state changed its policy and stopped demanding reimbursement of accidental overpayments.
Mr. Joseph’s predicaments are not particularly rare. This is what rebuilding has looked like for many people, in neighborhoods across the city, trying to navigate a thicket of federal, state, local and private rules, which even state officials have acknowledged can be confusing. Guidelines come and go, directions contradict each other, adjustments are made to fix one problem only to create another, and even the most responsive officials are often bound by rules they cannot change.
State officials are barred from discussing the details of individual cases, but Christina Stephens, a spokeswoman for the Governor’s Office of Homeland Security and Emergency Preparedness, wrote in an e-mail: “We’ve met with Mr. Joseph at the highest levels of the program a number of times to try to move forward in his case. We’ve recommended some paths forward for Mr. Joseph that will help him be prepared for future disasters, and we’re hopeful that he will use one of these avenues to complete his home” using state grant funds.
A couple of months ago, Mr. Joseph learned that the state had sent an engineer to his house. The engineer determined that it would cost over $20,000 just to fix the problems caused by the house’s sitting on cribbing for so long. Mr. Joseph would be forgiven those costs, but the official working on his case suggested a new plan.
“He told me he thinks the best thing for me is to build a new house,” Mr. Joseph said.
Here is where that stands: he is to sign a $250,000 contract with a builder for new house, though he would save some costs because a nonprofit organization, lowernine.org, would provide much of the labor for free. He could sell his building materials to the contractor, at least what was still usable. The state could provide roughly $60,000 in additional grant money. Mr. Joseph would probably have to come up with an additional $40,000 or so to make it all work.
But when he did, he could get started.