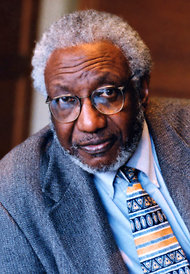 Roy S. Bryce-Laporte, a sociologist who led one of the nation’s first African-American studies departments, at Yale University, and did research that advanced understanding of blacks who came to the United States voluntarily rather than as slaves, died on July 31 in Sykesville, Md. He was 78.

His brother, Herrington J. Bryce, said that the cause was undetermined, but that he had had a series of small strokes.

Professor Bryce-Laporte was named director of Yale’s new department of African-American studies in 1969, when colleges and universities were recruiting black students and searching for ways to include their culture, history and other concerns in the curriculum.

Professor Bryce-Laporte taught a core course in the new program, “The Black Experience: Its Changes and Continuities,” which spanned the history of New World blacks from pre-slavery recruitment in Africa to 20th-century slums. He emphasized that black studies must address hot-button topics like racial stereotyping while retaining academic rigor.

“Black studies is the way by which respect is to be given to blacks and to knowledge about blacks,” he said in an article in The New York Times in 1969.

In an interview on Tuesday, the Harvard professor Henry Louis Gates Jr., who has written influentially on the black experience, said that as a Yale freshman he was inspired by Professor Bryce-Laporte to become a professor himself. “A different model was available to me,” he said.

Sidney W. Mintz, chairman of the committee that created Yale’s black studies curriculum, called Professor Bryce-Laporte “the first manager of the futures” of the outstanding black students drawn to Yale. He advised them to cultivate discipline, no matter how eager they were to change the world.

“You have to be adults,” he said, according to Professor Mintz, now research professor of anthropology at Johns Hopkins University.

Yale’s program went beyond that of some colleges by studying blacks in the entire Western Hemisphere, an approach that meshed with Professor Bryce-Laporte’s research focus. He wrote articles and contributed to books on the African diaspora in Latin America and the Caribbean. He examined how some sought new lives in the United States, and how some of them returned to the places in the Western Hemisphere they had left. The bulk of earlier research had concerned blacks brought unwillingly to the United States as slaves.

In 1986, when the centennial of the Statue of Liberty was being celebrated, Professor Bryce-Laporte curated an exhibit at the Schomburg Center for Research in Black Culture in Manhattan that focused on black immigration. He collected old photographs, diaries and certificates of nationality given to laborers. “If there is a forgotten or overlooked fact of black history, it is migration,” he said in an interview with The Times.

Before moving to Yale, where he taught for three years, he was an assistant sociology professor at Hunter College of the City University of New York. After his time at Yale, he led a varied career that included being a Woodrow Wilson International Scholar and the first director of the Research Institute on Immigration and Ethnic Studies at the Smithsonian Institution.

At Colgate University, Professor Bryce-Laporte was John D. and Catherine T. MacArthur professor of sociology and anthropology, and director of the Africana and Latin American Studies Program. He taught a course called “Total Institutions” in which he compared plantation slavery with social life in prisons and asylums.

Professor Bryce-Laporte, who had dual American and Panamanian citizenship, was married to Dorotea Lowe Bryce, who died in 2009. In addition to his brother, he is survived by his companion, Marian D. Holness; his sons, Robertino and Rene; his daughter, Camila Bryce-Laporte Morris; his sisters, Celestina Carter and Yvonne St. Hill; and three grandsons.

Martin Luther King Jr. and his arsenal of guns