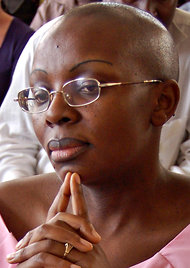 KIGALI, Rwanda (Reuters) — Rwanda’s high court on Tuesday sentenced a leading opposition politician to eight years in prison, in a case widely viewed as a test of the nation’s democratic limits and the independence of the judiciary.

The opposition leader, Victoire Ingabire, had faced six charges and was found guilty of two: conspiring to harm the country through war and terror, and minimizing the 1994 genocide that tore apart the nation.

She was accused of transferring money to Hutu rebels and of questioning why no Hutu victims were mentioned alongside Tutsi victims in a genocide memorial. More than 800,000 people were killed in the country when a Hutu-led government and ethnic militias went on a 100-day killing rampage in April 1994, indiscriminately killing Tutsis and moderate Hutus.

Ms. Ingabire, a Hutu, returned to Rwanda in January 2010 from exile in the Netherlands to take part in presidential elections but was barred after being accused of crimes linked to genocide denial. The vote was won overwhelmingly by President Paul Kagame.

Iain Edwards, Ms. Ingabire’s British lawyer, argued that the evidence against her was fabricated and that some of the charges were against Rwanda’s Constitution.

Mr. Kagame’s final presidential term expires in 2017. He has led his country’s recovery from the 1994 genocide, receiving praise for his efforts to transform Rwanda into a middle-income country by 2020.

But critics accuse him of being authoritarian and trampling on news media and political freedoms. He rejects the accusations.

“Political space in Rwanda barely exists, I would say, for opposition parties in the real sense of the word,” said Carina Tertsakian, a senior researcher with Human Rights Watch.

Phil Clark, a lecturer at the University of London’s School of Oriental and African Studies, said the prosecution of Ms. Ingabire sent a message to other Rwandan political groups.

“I think this verdict will certainly cause concerns that if they contest they may find very serious charges brought against them as well,” he said. “It sends a warning to other parties who may want to run in future elections.”