By Sibongile KhumaloPublished July 17, 2013
BAYSWATER, South Africa (AFP) –  Despite South Africa’s position as the continent’s largest economy, its public education system is in a dire state.
One secondary school in the country’s rural north shows just how dire.
Inside the yard of Alapha Secondary School in Limpopo province, stray donkeys roam between two classroom blocks.
Windows are broken and the stench emanating from the pit latrines hangs thick in the air.
There is little shade or airconditioning to offer respite from the brutal heat.
Academically, things don’t get much better. At the end of the 2012 school year not one of Alapha’s 20 pupils sitting their final high school exams passed.
Like many rural schools across the country, Alapha magnifies the failings of the country’s public education system, which has been ranked among the worst in the world. 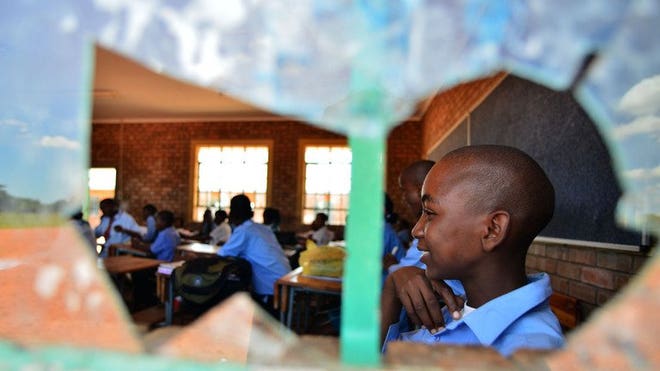 Students at class at the Alapha Secondary School on February 7, 2013 in Bayswater, South Africa. Despite the country’s position as the continent’s largest economy, its public education system is in a dire state. (AFP)


Despite education receiving the largest share of the national budget — 232.5 billion rand (17.9 billion euros, $23.4 billion) for education, sport and culture this year — Alapha has no library and no lab equipment to teach subjects like physics, chemistry or biology.
Mismanagement also plays its role in the lack of teaching aids.
Limpopo was the province most severely hit by the government’s recent failure to supply textbooks for an entire academic year.
“We just listen and visualise,” said Desiree Mathekga, one of the 30 learners tackling her final exams this year.
“It is hard, but this is all we have, we just have to study hard with what we have.”
Limpopo education department spokesman Pat Kgomo admits Alapha’s situation is “cause for concern, but not unique”.
Four other schools in the province also saw a zero-percent pass rate in 2012.
The government blames part of the problem on its inability to attract teachers, despite a 25-percent unemployment rate.
“Schools in rural areas tend to perform badly because few teachers are willing to work in far-flung areas,” said Kgomo.
School principal Jonas Ramapuputla said teachers who are there are overworked.
“Even myself I have very little time to manage the school, I have to roll up my sleeves and teach,” he said.
All this takes its toll.
The World Economic Forum recently ranked South Africa second from last in the world for math and science education, just ahead of Yemen.
The central government has acknowledged that “the quality of school education for black people is poor” across the country. 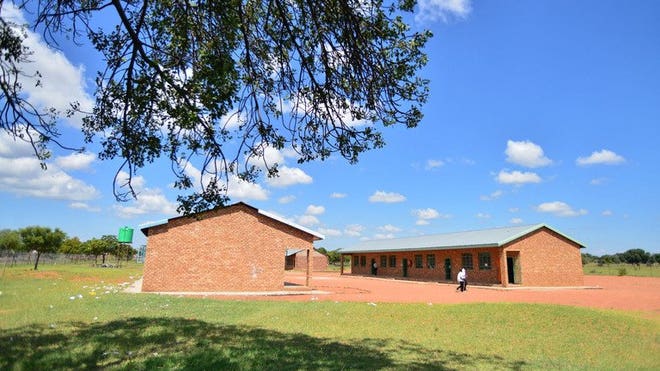 Alapha Secondary School on February 7, 2013 in Bayswater, South Africa. The central government has acknowledged that “the quality of school education for black people is poor” across the country. (AFP)

Turning that around has been listed as one of nine key challenges on the path to overhauling the economy.
Experts say the government will have to overcome years of underinvestment in black education under apartheid.
But 20 years after the end of white rule, progress remains slow, and many say the ruling African National Congress’ unwillingness to take on allies in the teaching unions is part of the problem.
So too is the vicious circle of poor education leading to poorly qualified teachers.
But undeterred by her school’s dismal pass rate, Desiree Mathekga is determined to go to university next year and study for a commerce degree.
She wants to become an accountant.
“I want to make my school and village proud,” said the petite 17-year-old.
Her school principal wants to make sure she has all the opportunities to do so.
He has decided to do away with the national norm of preventing failing pupils from repeating exams, giving them a second chance.
“These children had nowhere else to go, letting them go would only have served to perpetuate a cycle of poverty,” he said. “Without education they are nothing.”
Read more: http://www.foxnews.com/world/2013/07/17/safrican-school-with-zero-pass-rate-omen-crisis/#ixzz2ZK5dQGvN

Nigeria: The War Over Oil