Saartjie “Sarah” Baartman(before 1790 – 29 December 1815) (also spelled Bartman, Bartmann, Baartmen) was the most famous of at least two Khoikhoi women who were exhibited as freak showattractions in 19th-century Europe under the nameHottentot Venus—”Hottentot” as the then-current name for the Khoi people, now considered an offensive term,  and “Venus” in reference to the Roman goddess of love.

Sarah Baartman was born to a Khoisan family in the vicinity of the Gamtoos River in what is now the Eastern Cape of South Africa.  She was orphaned in a commando raid.  Saartjie, pronounced “Sahr-kee”, is the diminutiveform of her name; in Afrikaans the use of the diminutive form commonly indicates familiarity, endearment or contempt. Her birth name is unknown.
Baartman was a slave  of a Dutch farmer named Peter Cezar nearCape Town, which had recently come under British control. Alexander Dunlop, a military surgeon with a sideline in supplying showmen in Britain with animal specimens, suggested she travel to England for exhibition. Lord Caledon, governor of the Cape, gave permission for the trip, but later regretted it after he fully learned the purpose of the trip.  She left for London in 1810.

A caricature of Baartman drawn in the early 19th century

Baartman was exhibited first in London, entertaining people because of her “exotic” origin and by showing what were thought of as highly unusual bodily features. She had large buttocks (steatopygia) and also the elongated labia of some Khoisan women. To quotehistorian of science Stephen Jay Gould, “The labia minora, or inner lips, of the ordinary female genitalia are greatly enlarged in Khoi-San women, and may hang down three or four inches below the vulva when women stand, thus giving the impression of a separate and enveloping curtain of skin”.  Baartman never allowed this trait to be exhibited while she was alive,  and an account of her appearance in London in 1810 makes it clear that she was wearing a garment, although a tight-fitting one.
Her exhibition in London, scant years after the passing of the Slave Trade Act 1807, created a scandal. An abolitionist benevolent society called the African Association – the equivalent of a charity or pressure group – conducted a newspaper campaign for her release. The showman associated with her exhibition, Hendrick Cezar  in an answer protested that Baartman was entitled to earn her living by this means: “…has she not as good a right to exhibit herself as an Irish Giant or a Dwarf?”.  The African Association took the matter to court and on 24 November 1810 at the Court of King’s Bench the Attorney-General began the attempt ‘to give her liberty to say whether she was exhibited by her own consent’. In support he produced two affidavits in court. The first, from a Mr Bullock  of Liverpool Museum, was intended to show Baartman had been brought to Britain by persons who referred to her as if she were property. The second, by the Secretary of the African Association, described the degrading conditions under which she was exhibited and also gave evidence of coercion.  Baartman was questioned before an attorney in Dutch, in which she was fluent, via interpreters. She stated that she was not under restraint, did not wish to return to her family and understood perfectly that she was guaranteed half of the profits. The case was therefore dismissed. She was questioned for three hours without anyone connected with her exhibition being present; however the conditions under which she made these statements are suspect, because her declaration directly contradicts accounts of her exhibitions made by Zachary Macaulay of the African Institution and other eyewitnesses.  A written contract  was also produced by Dunlop, though this is considered by some modern commentators as a legal subterfuge.
The publicity given by the court case increased Baartman’s popularity as an exhibit.  She later toured other parts of Britain and visited Ireland.  On 1 December 1811 Baartman was christened at Manchester Cathedral.

Baartman was sold to a Frenchman, who took her to his country. She was in France from around September 1814. An animal trainer, S. Réaux, exhibited her under more pressured conditions for fifteen months. French naturalists, among them Georges Cuvier, head keeper of the menagerie at the Muséum national d’Histoire naturelle, visited her. She was the subject of several scientific paintings at the Jardin du Roi, where she was examined in March 1815: as Saint-Hilaire  and Frédéric Cuvier, a younger brother of Georges, reported, “she was obliging enough to undress and to allow herself to be painted in the nude.” In accordance with her own cultural norms of modesty,  throughout these sessions she wore a small apron-like garment which concealed her genitalia. She steadfastly refused to remove this even when offered money by one of the attending scientists.  It has been alleged that once her novelty had worn thin with Parisians, she began to drink heavily and support herself with prostitution. ]Baartman however had refused payment to allow scientists to observe her genitals in spring 1815, suggesting she both had her own standards of modesty and was not destitute at that time: and as a French paper  carried the usual advertisements for her show only a week prior to her death, she may always have been able to support herself without recourse to prostitution.

She died on 29 December 1815 of an undetermined inflammatory ailment, possibly smallpox,  while other sources suggest she contractedsyphilis,  or pneumonia. An autopsy was conducted, and published by French anatomist Henri Marie Ducrotay de Blainville in 1816 and republished by French naturalist Georges Cuvier in the Memoires du Museum d’Histoire Naturelle in 1817. Cuvier notes in his monograph that its subject was an intelligent woman with an excellent memory, particularly for faces. In addition to her native tongue she spoke fluent Dutch, passable English and a smattering of French. He describes her shoulders and back as “graceful”, arms “slender”, hands and feet as “charming” and “pretty”. He adds she was adept at playing the jew’s harp  could dance according to the traditions of her country and had a lively personality. Despite this he interpreted her remains, in accordance with his theories on racial evolution, as evidencing ape-like traits. He thought her small ears were similar to those of anorangutan and also compared her vivacity, when alive, to the quickness of a monkey.  Her skeleton, preserved genitals and brain were placed on display in Paris’ Musée de l’Homme until 1974, when they were removed from public view and stored out of sight; a cast was still shown for the following two years. 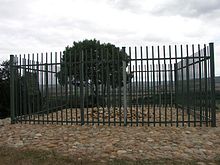 There were sporadic calls for the return of her remains, beginning in the 1940s. A poem written in 1978 by Diana Ferrus, herself of Khoisan descent, entitled “I’ve come to take you home”, played a pivotal role in spurring the movement to bring Baartman’s remains back to her birth soil. The case gained world-wide prominence only after Stephen Jay Gould wrote The Hottentot Venus in the 1980s. After the victory of the African National Congress in the South African general election, 1994, President Nelson Mandela formally requested that France return the remains. After much legal wrangling and debates in the French National Assembly, France acceded to the request on 6 March 2002. Her remains were repatriated to her homeland, the Gamtoos Valley, on 6 May 2002  and they were buried on 9 August 2002 on Vergaderingskop, a hill in the town of Hankey over 200 years after her birth.
Baartman became an icon in South Africa as representative of many aspects of the nation’s history. The Saartjie Baartman Centre for Women and Children,  a refuge for survivors of domestic violence, opened in Cape Town in 1999. South Africa’s first offshore environmental protection vessel, the Sarah Baartman, is also named after her.